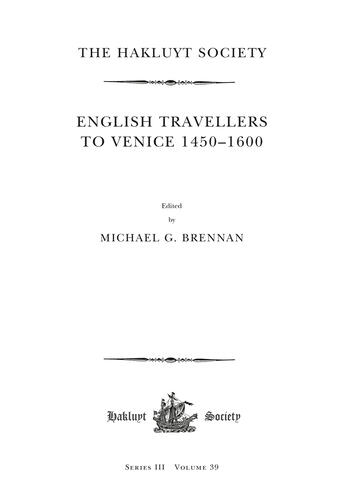 Renaissance Venice was an important crossroads for people from across the world. People from different geographical, social, economic, linguistic, religious, and ethnic backgrounds could pass through the city for shorter or longer periods of time. This has been attracting scholarly attention for decades, and the diverse approaches that have been adopted have contributed to various fields of study. English Travellers to Venice 1450-1600, edited by Michael G. Brennan, Professor of Renaissance Studies at the School of English at the University of Leeds, focuses on a specific group of foreigners in a specific period of time: English travelers between 1450 and 1600. This was an eventful period for both England and Venice, as they both had to deal with various internal and external problems. As a result of the English Reformation, the relationship between the two also underwent important changes. Their often difficult relationship in the latter two-thirds of the sixteenth century is exemplified by the fact that during the reign of Queen Elizabeth I there were no formal diplomatic contacts between them. Nevertheless, contacts between people from Venice and England continued to exist. By focusing on English travelers to Venice in this period this book aims to provide insight into various aspects of early modern Anglo-Venetian relations (p. 1): in particular the importance of Venice and the Veneto to England, the diversity of English travelers to Venice and how this changed over time, but also a broad range of other topics that are brought up in the individual sources.

The book presents 35 case studies, which treat a broad spectrum of Anglo-Venetian connections, even broader than the title of the book suggests: in addition to English travelers to Venice there is also, for example, a case that focuses on Venetians living in England who were entrusted with the salvaging of a ship sunk off the coast of England, and one about the Venetian government gathering intelligence on the 1588 Spanish Armada invasion of England. The English communities at the University of Padua are frequently referred to as well. Most case studies, however, do focus on English travelers to the city of Venice. The early modern period saw people travel for many different reasons, and this is reflected in the diverse types of travelers treated in the book, such as pilgrims, diplomats, exiles, sailors, and young men sent to the continent to broaden their education. They came from different parts of England and some even from other parts of the British Isles, as in the case of the Scottish James Crichton, or Henry Piers, son of English parents settled in Elizabethan Ireland.

In the book’s introduction some of the overarching themes of the various case studies are brought together, but the largest part of the book is devoted to the individual case studies. Each one is treated in detail. Since they are so diverse, they give the reader the opportunity to learn more about a variety of aspects related to English traveling to Venice in particular and early modern Anglo-Venetian relations more in general, such as the functioning of diplomacy, the literary traditions in which certain travel accounts were rooted, English interest in various parts of Venice’s urban fabric, language learning, and the practicalities of traveling in the early modern period.

Many case studies contain a part from a primary source, ranging from a few paragraphs to dozens of pages. Some of these are in the original English, some in both the original English and a modernized version, some in a modern English translation from Latin or Italian, and some in both the original Italian and a modern English translation (it is not entirely clear why they are not all presented in the same way). A range of resources are provided to help the reader better understand the topics addressed in the primary sources: the sources themselves are usually generously annotated with explanatory footnotes, and the book also contains a chronology, an appendix with explanations of Venetian locations, institutions, and ceremonies, and dozens of maps, color plates, and figures. These diverse ways of cross-referencing make the material accessible also to people less acquainted with the topic, and will make the book useful for teaching as well. It would have been helpful for readers of the e-book version of the volume to accompany the references to the maps, plates, and figures with a mention of the page number or even with a link to jump to them directly from the main text: it is now rather time-consuming for readers of the e-book version to compare the text and the images.

The wide range of case studies concerning English travelers to Venice and occasional cases of other types of Anglo-Venetian connections include both well-known examples, such as William Wey and Fynes Moryson, and ones with which readers may be less familiar. Bringing them together in one volume will therefore introduce a diverse readership to a series of sources that they may not know yet. In addition to bringing individual sources to attention, the case studies treated in the book, when read all together, provide the reader with a clear idea of the variety of Anglo-Venetian connections in the early modern period. The book will therefore be of interest to people working in various fields of study, in particular English literature, early modern Venetian history, and mobility studies.