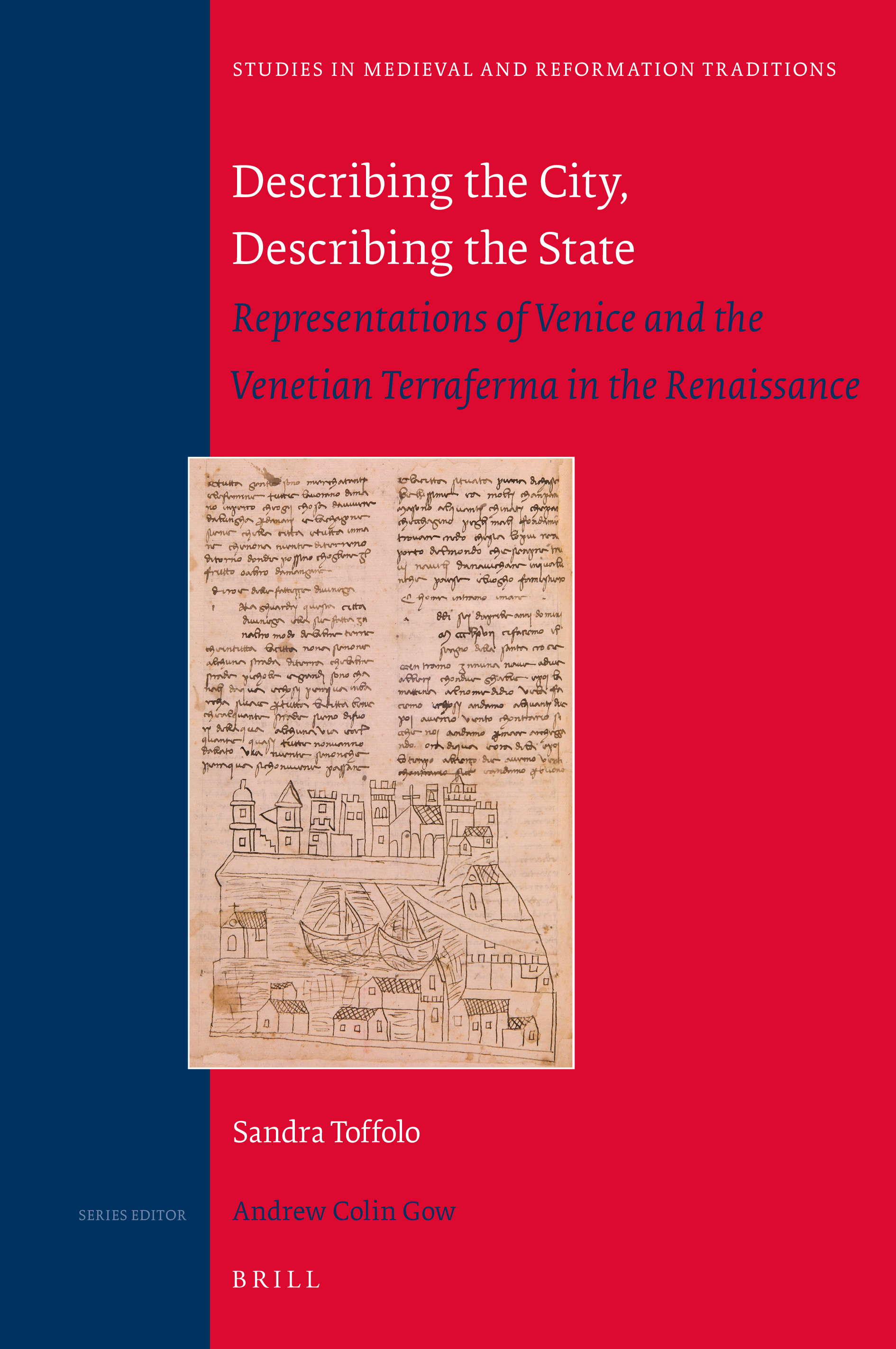 Citation
M. Salonia, review of Sandra Toffolo, Describing the City, Describing the State. Representations of Venice and the Venetian Terraferma in the Renaissance, Leiden, Brill, 2020, in: ARO, V, 2022, 3, URL https://aro-isig.fbk.eu/issues/2022/3/describing-the-city-describing-the-state-matteo-salonia/

In 1421, the Venetian diplomat Lorenzo de Monacis defined Venice as a city that, «born free and founded only under the Christian faith, has reached a thousand years with intact dominion and with undefeated liberty» (pp. 159-160). In these words, we find many of the themes explored by Sandra Toffolo in her splendid monograph titled Describing the City, Describing the State: Representations of Venice and the Venetian Terraferma in the Renaissance. Seeking to clarify the perceptions of both an urban space and its growing territorial possessions between the 1380s and the start of the Cinquecento, Toffolo carefully problematizes the ways in which a variety of actors intellectualized, communicated or challenged Venice’s character as a city and as the center of a state. Her book enlightens how religious piety, history, and political relations (beyond clear-cut notions of freedom and domination) combined, overlapped, and were stressed or dropped to inform an exceptional amount of writings, physical features of the urban landscape, ceremonies, and artistic representations.

The structure of the book – on which I shall comment later in this review – invites the reader to reflect first on Venice as a self-contained urban space, and then on its Italian dominions, the Terraferma (as opposed to the more scattered dominions across the Adriatic, the Stato da Mar). Thus, Part I is divided into four chapters that in turn discuss the religious, material, political and moral themes emerging from descriptions of the city of Venice. Chapter 1 demonstrates that texts as diverse as family histories, pilgrims’ accounts, and religious poems could agree about the role of Christianity and piety in Venice’s past and urban landscape, while they could also deploy this theme in different, even conflicting ways. Surely this is perceivable in the treatment of relics and churches across the lagoon, but it is even more evident in the contested uses of St. Mark’s praedestinatio and lion. For instance, Toffolo ably helps the reader grasp the twofold significance of «leonoclasm», episodes of destructions of statues and other physical images of the lion of St. Mark, which uncover how links between Venice and its dominion were not just symbolic and surely not so benevolent as many of the texts presented in the following chapters attempted to suggest.

In Chapter 2, material culture is intended broadly, and one almost shares the feeling of dazzling surprise and disorientation that must have accompanied fifteenth-century visitors of Venice as they moved around busy streets and apparently endless, wealthy markets. Promptly, Toffolo comes to our rescue pointing out how much of this impression was the effect of deliberate interventions of the Venetian government on the physical fabric of the urban spaces more often visited by foreign pilgrims and travelers. The Republic tried to embellish these areas and to give the impression of a whole city overflowing with goods and merchandise, especially around Rialto and Piazza San Marco. The themes treated in this chapter (including even the glass industry and scholarship) are too many to list, and Toffolo makes it difficult to do justice to her vast knowledge. Here, I would simply stress two points: first, the author’s intelligent connection between space, texts, and ceremonies, with the latter playing a fundamental role in the construction of a quite unique image of Venice especially among foreigners who would take part in feasts such as Ascension Day and St. Mark; second, the amusing flavor of several descriptions of the city, such as the one penned by the Sicilian student Caio Caloria, whose attention was captured not only by the water and the canals but also by the sounds coming from them, especially the music and singing of young Venetians. This latter characteristic of the book, dotted with enjoyable texts continuously bringing up new images, renders what is an obviously scholarly book also a suggested reading for lay readers.

The third chapter is a useful introduction to the historiography on the «myth of Venice», which then elegantly turns into a discussion of conflicting views of Venice’s political life and constitutional system. Toffolo is persuasive, if not original, when she explains why the Republic could be seen either as a mixed constitution or as an aristocracy, but then, towards the end of the chapter, her contribution returns to a high level of originality with the inclusion of poems with political references, a subgenre thus far overlooked by scholars. Chapter 4 is a brief essay that prolongs the author’s focus on morality and political order, fleshing out the influence of conflicts like the Italian Wars and the War of the League of Cambrai on texts commenting on Venice’s virtues – and on what they meant in the contingent political context.

Part II of the book moves to investigate the changes brought by the construction of a mainland state and the many agendas and perspectives that we find in authors who penned descriptions of the Terraferma. In this second part, it becomes quite apparent that Toffolo’s research is indispensable for any scholar interested in the interdisciplinary study of Italian intellectual history, political theory, and human geography: Renaissance histories and geographical descriptions (such as the popular poem by Francesco Degli Allegri, starting its historical account with Venice’s role in the conflict between Emperor Barbarossa and the Pope) reveal a wealth of different strategies used by Venetian and pro-Venetian authors to justify mainland expansion. Toffolo is sensitive to the emergence of ideas of benevolence and hierarchy in descriptions of the relation between Venice and the Terraferma, as well as to the intermittent use of the legend concerning the foundation of the city.

The sixth chapter is an invaluable, in-depth examination of texts written by inhabitants of the Venetian mainland, coming mostly from cities and territories that had been conquered or anyway acquired by Venice. I believe that this is the best chapter in the whole monograph, and by itself it requires the attention of late medievalists and early modernists working on political and intellectual history. Poems describing Verona and Vicenza are shown to use classical references to avoid mentioning the relation of these cities to Venice, while their dedication to local families underscore the resilience of locally-rooted political loyalties and civic cultures. Similarly, Uberto Pasculo’s Oratio is a fascinating text, which was dedicated to the magistrates of Brescia and deliberately gives the impression of an independent city, not subject to Venice. Yet Toffolo complicates matters by presenting, among other examples, Jacopo Sanguinacci’s works, where as early as the first half of the fifteenth century we find the mainland state treated harmoniously as a whole. The main argument here appears more clearly, and diatribes over the «myth of Venice» do indeed sound redundant after one absorbs the complexity and multiplicity of narratives about the Venetian state, and the countless factors that could influence them, such as the different constitutional arrangements between subject cities and the metropolis.

In conclusion, this is a beautiful work of scholarship. Toffolo moves cleverly across a rich profusion of images from texts, but also ceremonies and prints. Some of the latter are stunning, and I was especially captivated by Toffolo’s presentation of Jacopo De’ Barbari image of Venice, as «a compact city surrounded on all sides by a large ring of water» (p. 92, image on p. 94). The only shortcoming has to do with the structure: strangely enough, editors and reviewers have overlooked the uneven distribution of space between chapters. In particular, Chapter 2 is almost 70-pages long (!), and not by chance this is the only section that seems too descriptive, and where it becomes arduous for the reader to guess the main argument. However, this is a relatively minor flaw. Overall, this exceptionally well-researched book leaves us convinced that the study of Renaissance preoccupations with political spaces should include geographic descriptions. It also offers us thoughtful insights on the relations between Venice and its territories in Northern Italy.