Anatomy of the Medical Image 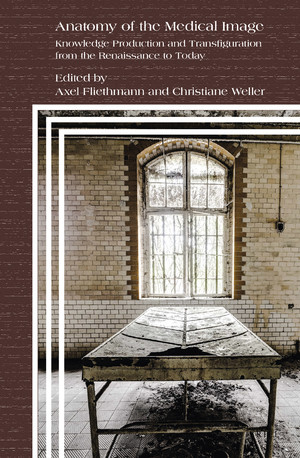 Anatomy of the Medical Image (2021) is Clio Medica’s most recent contribution to an established literature on visual representation in the history of medicine. Edited by Axel Fliethmann and Christiane Weller, the book is the product of an international conference hosted in 2017 by Monash University, Melbourne. The contributing authors to this publication span numerous geographic contexts (Australia, China, Germany, North America, and the United Kingdom) as well as academic traditions (History, Literature, Language, and Art). The result is a publication that thus offers diverse perspectives for reading images in medicine as well as medical imagery in visual culture.

Part 1 of the book grapples with the intersections of art, anatomy, religion, philosophy, and bodily as well as depictive aesthetics between the sixteenth and eighteenth centuries. Jill Redner opens this section with a close reading of Rembrandt van Rijn’s The Anatomy Lesson of Dr. Johannes Deyman (1656) within the philosophical, theological, and political climate of mid-seventeenth century Holland. Through a dense engagement with the impact of Descartes’s writings (particularly those related to reason and physiology), Redner argues that the painting showcases competing claims around the body, mind, and soul in this context.

Chapter 2 by Axel Fliethmann addresses «pathologies of imagination» in the sixteenth century by touching on a vast array of historical moments and philosophical understandings of «imagination» as both a form of sinful bodily seduction and a creative product of the mind. By tapping into the impact of visual technologies (such as the printing press) and the divergent modes of anatomical knowledge at the time, the author seeks to outline how medical understandings of the imagination was shaped.

Elizabeth Stephens’s chapter provides insight into the gendered intersection of popular, scientific, and aesthetic concerns as they circulated around medical models and women modellers. Drawing attention to materials, representational styles, and medical conceptions of the female body, her discussion engages Anatomical Venuses, moulages, and birthing machines, as well as methods of learning obstetrics – from the visual to the tactile, and from wax to cloth.

In the final chapter of this section, Heikki Lempa takes the ideal male body in eighteenth-century Germany as a contested site. By using gymnastics images in texts associated with an elite boarding school, the author demonstrates how attributes of both the fit, smooth, supple Helenistic body and the «strongman» aesthetic of the Germanic tribesman were harnessed to form a «classic» German male body in this period.

The second part of the book deals with questions surrounding portraiture – those of doctors, patients, pathology, and the processing of pain. It opens with Corinna Wagner’s address of physiognomic concerns related to facial expression during the nineteenth century. Focusing on the medium of photography, Chapter 5 identifies how questions of «normal» and «abnormal» emotional and mental states were believed to be visible in the movements of the face. Photographs of «idiots», «imbeciles», and «cretins», as well as discussions of stimulated, involuntary, or shifting facial responses are used to show the ambiguous place of internal workings (character and sensibility) with regards to external appearance.

Chapter 6 sees Joanna Madloch outline the emergence of occupational photographic portraits in medicine as aligned to the professionalization of physicians. As the author argues, photographs of medical professionals «required a more specific system of signification» (p. 141) than other nineteenth-century portraits. Variously included was thus the presence a human skull or a dissected corpse as an object of veneration, a marker of knowledge, a symbol of death conquered, as proof of medical training, or as a reanimated fellow.

Carolyn Lau’s chapter engages the nineteenth-century medical portraits by well-known painter Lam Qua. The paintings of Chinese patients with large and highly conspicuous tumours are framed as «artefacts of transcultural scientific and artistic encounters» (p. 158). However, beyond this, the author discusses how these portraits destabilize the dichotomies of science/superstition, western/eastern medicine, doctor/patient, artist/subject, and even human/animal.

A graphic illness narratives titled The Quickening (2018) is the subject of Chapter 8 by Stef lenk. Rather than focusing on the content or context of this work (produced by the author), multiple draft versions of this illustration are discussed to emphasize the extended creative process. The chapter thus outlines the experiences underlying the inner landscapes of anxiety and depression as well as lenk’s creative attempt to conceptualize and communicate this to her audience.

Shifting to the twentieth and twenty-first centuries, Part 3 attends to the operations of medical images in the popular imagination as well as in the political sphere. Using a biomedical advertisement as her point of departure, Claudia Stein historicizes ongoing debates around human decision-making, commerce, and economic thought in Chapter 9. This is done by tapping into a largely unexplored nexus between biomedical models and economic theory – one that touches on histories of the public poster, germ theory, consumerism, and the relationship between humans and things at the turn of the twentieth century.

Chapter 10 by Michael Hau contextualizes the diagnosis of «arrested development» via capillary images in 1920s Germany. While methodologically flawed and widely critiqued, the author successfully outlines the ideological undertones of this science and thus the official uptake of eugenic ideas surrounding mental, emotional, and moral child development.

Brigit Lang unpacks the aesthetic and socio-cultural landscape of Lustmord (sex crime) as depicted by artists Otto Dix, George Grosz, and Rudolf Schlichter in Chapter 11. Here, she draws parallels and demonstrates differences between the representations of the brutalized bodies of female murder victims in Weimar art and forensic photography. Approached from an art historical perspective, the careful visual analysis highlights the tensions between questions of intention and audience in both art and science.

Chapter 12 articulates how medical and creative concerns play out in twentieth century psychiatric art. Variously framed as products of «psychotic» vs. «outsider» artists, the illustrations of psychiatric patients are used by author Christiane Weller to address both the medical desire to decipher mental illness through these works as well as the function of this art as counter-narrative to psychiatric intent.

The closing chapter of the book is Barry Murnane’s discussion of the uncanny biomedical body as represented in the BBC series In the Flesh (2013). Through a careful application of transhumanist thought to the Gothic genre of the zombie, the author engages powerfully with social and medical notions of life, death, sentience, data, and embodiment with respect to horror.

The assorted chapters provide a broad range of arguments, ideas, and sources of interest to those studying the medical image. Stephens (Chapter 3) provides a good overview of the gendered nature of anatomical knowledge, lenk (Chapter 8) offers a fascinating and theoretically informed reflection of her creative process, and Murname (Chapter 13) expertly juggles his semiotic analysis with philosophical critique. As a whole, however, the book does suffer from a lack of focus on the images it features; many chapters pay more attention to heavy theoretical or contextual debates that take up a large amount of space, thus limiting the ability for authors to dive deeply into the case study images. It is thus perhaps not ideal for seasoned researchers of the medical images and imagery. However, it would definitely serve as an eye-opening introduction to historians unfamiliar with the visual culture of science and medicine.