A Companion to Religious Minorities in Early Modern Rome 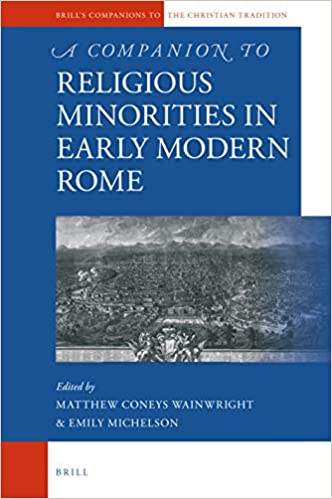 Early modern Rome was more than a city; it was a unique and compelling idea. Even in its most pragmatic endeavors, the authority of its dual papal and civic government was justified and bolstered with allusions to Saint Peter, the favorite disciple of Christ, and the august virtues of a long dead but much glorified ancient Roman Empire. Whilst the city of Rome was far from dormant in the medieval period – as scholars like James A. Palmer have clearly shown – the development of the city’s identity and structures intensified from the early fifteenth century onwards, when the popes returned to the city after decades of exile in Avignon and schism between claimants to Saint Peter’s See. Shaping the character and lives of the city with an ever heavier hand, the popes of the early modern period steeped Rome with ideas and ideals that defined and broadcast their ambitions as both princes of the Papal States and pastors of souls from the Vatican Hill to the ends of the known world.

Such intense activity left behind an abundance of primary sources, collected and organized in numerous, largely ecclesiastical, libraries and archives in the city today. This makes for a rich historical field, but one that is frequently dominated by the loud voices and favorite legends of the most powerful stakeholders in the early modern city. In such narratives, religious minorities often appear as the passive object of the papal grand plan. By making these groups their focus of inquiry, the editors and contributors of The Brill Companion to Religious Minorities in Early Modern Rome unpick and nuance the layers of narrative that surround the history and historiography of the early modern city. Crucially, they illuminate the lives, agendas, and influence of thousands of often overlooked actors in the history of early modern Rome and, through this, more clearly define the priorities and limitations of ecclesiastical power. The picture that emerges is far from the papal ideal of Rome as a pure Catholic city, where people on the margins were mere projects or failures in the Church’s mission to convert and save souls.

The ghetto walls might have made religious boundaries in Rome appear concrete but in the lived experience of the city «confessional identities could be mutable or easily concealed» (Matthew Coneys Wainwright). Ironically, the Church’s focus on conversion and desire to make Rome a paragon of the Catholic faith actually encouraged and facilitated this phenomenon of shifting identities. In her contribution to this volume, Serena di Nepi evidences this compellingly as she argues that Pius V emancipated slaves who had converted to Christianity as a means of making Rome «the sole and authentic model of Catholic society» (and despite the economic, political, and social consequences). Chapters by Coneys-Wainwright and Irene Fosi show that the conversionary aims of institutions like the archconfraternity of Santissima Trinità dei Pellegrini and the Venerable English College also inadvertently encouraged the obfuscation and transformation of the religious identities about which they cared so much. Reading the institutional documentation in context and often against the grain, narratives of spiritual triumphalism quickly break down. Instead, we see minorities of varied confessions using simulation and dissimulation to meet their practical needs. This was not always cynical. For many, whether emancipated slaves, converted Muslims or Ethiopian ambassadors, Rome offered genuine religious sanctuary and significance. Yet even in these cases, the agenda of minorities frequently diverged from that of the Church. Some of the Eastern Rite clerics discussed by Cesare Santus disregarded Roman liturgical norms even as they benefited from the city’s importance as a religious center, hearing confession and saying Masses in return for precious alms. Even Rome’s more repressive policies could be turned to some advantage, as James Nelson Novoa shows in his discussion of the «New Christians» in Rome who used their identity to negotiate privilege for their community in a city where a return to Judaism was out of the question.

In some cases, the coalescence between the agendas of popes and minorities was much clearer cut. The Persian ambassador ‘Ali-qoli Beg and the delegation of the Ethiopian Emperor Dāwit I confirmed Rome’s status as a uniquely important city when they toured its holy places and marvelled at its cultural sites. Minority groups also worked in direct collaboration with Roman authorities on political, cultural, and intellectual projects. This is evident in the case studies of Olivia Adankpo-Labadie and Sam Kennerley, which discuss the Ethiopian pilgrims and scholars who worked at the heart of the Vatican and under the patronage of prominent cardinals like Pietro Bembo and Marcello Cervini. When agendas interweaved, papal approaches to minorities could shift. Non-Christians were allowed in the city – as prospects for conversion. Moreover, as long as Ethiopians at Santo Stefano degli Abissini did not cause scandal and worked to corroborate Catholic doctrine, there does not seem to have been any concerted effort to convert their community to Catholicism. Such examples firmly situate the influence of minority groups in scholarship that underlines the more reactive and pragmatic approaches of the early modern Church, whilst not losing sight of its ultimate objectives of religious purity and hegemony.

By studying the influence and experience of minority groups, the volume also illuminates the priorities of the early modern Church. This is an approach favored by one of the editors, Emily Michelson, whose chapter on public preaching to Rome’s Jews underlines its function as an exhibition of the Church’s overarching and now global mission to save souls – particularly those whom they believed stubbornly denied themselves salvation. A simple comparison between examples in contributions by Justine Walden and Coneys-Wainright reveals that Catholic organizations instrumentalized minorities in diverse ways to communicate the same key messages: parades of hundreds of chained Algerian slaves and the multi-lingual hymns sung during processions from Santissima Trinità dei Pellegrini both served to show the dominance and extensive reach of the Catholic Church. In such ceremonies the true identities and agency of minority individuals and groups were elided. Even religious difference could be erased if it served papal aims. As Mayu Fujikawa reveals in her contribution on diplomacy at the papal court, the embassies of non-Catholic Christians were treated similarly to those who were not Christian at all. Both groups were defined, above all, as ambassadors who did not – yet – recognize papal supremacy. Honors might be intensified for far-off leaders and visiting students might be described as ambassadors, but only to serve the same central papal purpose: to «underscore the worldwide dissemination and acknowledgement of the pope’s supreme authority».

Some of the volume’s most significant and compelling insights emerge where papal aims and minority agency clash, highlighting the influence of marginalized individuals and groups, as well as the limits of the Church’s might. In his chapter, Piet van Boxel argues that Jewish scholars survived through self-censorship and that the Talmud remained widely available despite the ardent efforts of Gian Pietro Carafa. Whilst Michelson shows us that the public resistance and objection of Jews to conversionary preaching exerted real – even if limited – influence on Catholic authorities. Rome’s Jews were an ancient part of its population, but limitations on papal power are also marked out by the actions of visitors from far afield. In his chapter, Robert Clines presents a series of case studies that underline the agency and objectives of Eastern Rite Christian leaders like Dawud, Patriarch of Antioch, and his representatives. These were men who placed clear limits on the pope’s role and power in practice. Whilst pontiffs like Gregory XIII might have received their requests that he act as a mediator in disputes as calls on his supreme authority, when the pope demanded submission their embassies withdrew. By highlighting the discrepancies between the Church’s ideals and reality, such contributions do much more than illuminate a different perspective on papal action. Ultimately, they define its real limits in early modern Rome and beyond. These were limits that were, eventually and in some cases, acknowledged even by Roman authorities, who, for example, focused anti-heretical investigations on those who made their religious difference obvious to others.

The twelve chapters that comprise this volume produce a history of Rome that is truly polyphonic, echoing the highly successful approach of The Brill Companion to Early Modern Rome published in 2020. In doing so, the contributors build on several significant fields of research – from the experience of Jews in early modern Europe to the interactions between Africa and the Mediterranean – the implications of which spread far beyond the walls of Rome. Throughout there is a close use of historical documents, many of which are reproduced in part or full. Contributors frequently highlight significant and previously neglected sources, which could offer vital prosopographical and qualitative information on individuals and entire communities who walked the streets of the early modern city. This volume is a carefully researched, timely and rich contribution to the history of Rome, the Catholic Church as well as of the vast and varied cast of actors and communities who deliberately or inadvertently engaged with the city and its authorities. The overall result is a history of early modern Rome populated with figures that might otherwise remain in the shadows, with Persian diplomats, Muslim slaves, Roman Jews, African scholars, and Eastern clerics appearing not only as facilitators of Catholic projects but as scholars in libraries, servants in hospitals, interlocutors with popes, and agents with agendas that could clash, and sometimes even prevail, against those of the Catholic Church.