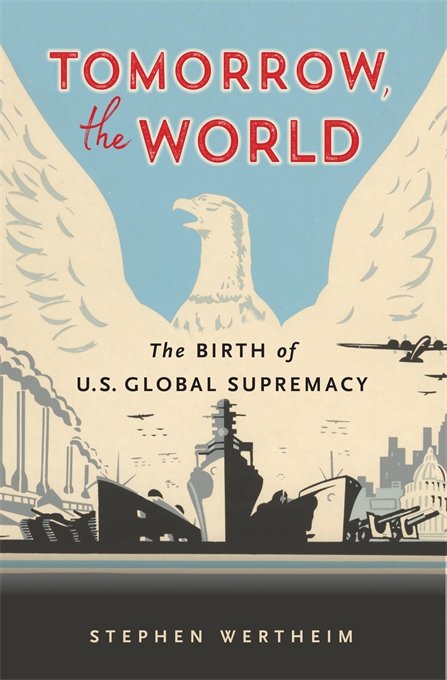 Stephen Wertheim has written an original, at times brilliant, and yet ultimately unconvincing account of America’s ascendancy to global power and primacy: of the transformation of U.S. internationalism, and its transmogrification into a plea for – and justification of – full spectrum military dominance. Whereas until World War II, and the crucial climax of 1940-1941, US internationalism predicated a form of «engagement without entanglement» (p. 175) in world affairs, after that a new and distinctive American internationalism, based on armed supremacy and the willingness to deploy it to enforce or restore «world order» (p. 45) emerged. Choice and necessity, possibility and obligation concurred to this metamorphosis. The 1930s, the economic crisis and the rise of the totalitarian challenge had finally delegitimized one of the key assumptions behind the U.S. internationalist project: that an intrinsically enlightened world public opinion could underpin a global order based on the rule of law, economic interdependence and peaceful intercourse. «Appearing as a false hope since the mid-1930s», as Wertheim writes, with the inception of World War II that assumption increasingly «looked like a perilous delusion». (p. 56). Called to reflect on the rapidly changing scenario and to offer practical predictions and prescriptions to policy-makers, the pundits, scholars, IR experts on which Wertheim primarily focuses – based, among others, at the Council on Foreign Relations, the Yale Institute for International Studies and the Foreign Policy Association – embarked on a task that was at the same time analytical, political, and pedagogical. They studied international relations and the definition of the U.S. national interest. They suggested the policies to adopt and the strategies to pursue. And they taught how to act in this rapidly evolving landscape as well as the commitments and responsibilities that the United States had now to take on.

In doing so, they contributed to a radical departure from the basic axioms of America’s venerable internationalist tradition. Non-entanglement was rapidly discharged as impractical and even dangerous. Global supremacy via military force, and the willingness to use it, became the privileged alternative. To achieve this objective – and this is possibly the most convincing and original element of the book – the new internationalists, i.e. globalists/world supremacists, embarked on an intense effort to discredit and delegitimize all possible alternatives. This was particularly true for the other most conventional forms of internationalism, conveniently lumped together under the pejorative umbrella of isolationism.[1] «Under the black flag of isolationism – Wertheim argues – all opponents of the armed enforcement of world order» were now grouped, automatically making «an isolationist out of critics of great power dominance» (p. 45).

In a year and a half, between the fall of France and the attack on Pearl Harbor, «foreign policy elites undertook a thoroughgoing reevaluation of America’s world role, ultimately concluding that the United States should underwrite international order by securing its own political and military supremacy» Wertheim writes (p. 49). Alternatives were considered, particularly a hemispheric retreat that would eventually allow for some form of coexistence with a Nazi-controlled Eurasia. However, they were deemed unfeasible and perilous, economically and strategically. Furthermore, Britain’s resistance to the Nazi challenge ended up offering the precondition for pursuing a much more radical and ambitious global policy: «to enforce world order as the supreme military power on earth» (p. 50). This would permit the restoration and expansion of global trade and commercial intercourse (the economic rationale for opposing a German-led world order); and would place the U.S. at the center of world history, fulfilling its alleged mission and destiny. «Confined in space if the Nazis won» – Wertheim cogently writes – the United States would have also been written out of the future. Like a prisoner, it would become a passive sufferer acted upon by history rather than an agent making history … Axis supremacy in Asia and Europe would deny the destiny of the United States to define the direction of world history» (p. 58; p. 73).

The decision was then made: it was up to America to set the terms of the new world order. Because it was its right and destiny; because the challenge brought by the alternative Nazi order imposed this response; and because – given its unquestioned industrial and soon military supremacy – the United States had now the means to take the burden and lead the world. «Against appeals to America’s non-entanglement tradition – Wertheim maintains – interventionists could reply that the higher objective was always to redeem the world. It was better to preserve free intercourse and the American destiny, at the price of entanglement, than to hold fast to non-entanglement, at the price of isolation» (pp. 74-75).

And so the «American Century», in Henry Luce’s renowned definition, began. A century based not just on U.S. engagement and world leadership, whether pursued unilaterally or in cooperation with others, but first and foremost on global military force and, when necessary, its use. Now a senior fellow at one of the foremost Washingtonian think tanks, the Carnegie Endowment for International Peace, after having contributed to the birth of a peculiar, bipartisan and non-interventionist think tank, the Quincy Institute for Responsible Statecraft, Wertheim clearly reads history with an eye to the present: as a way to historically ground his critique of current U.S. foreign policy. A prolific, provocative and increasingly prominent commentator – last year the British «Prospect» magazine named him one of «the world’s 50 top thinkers for the Covid-19 age»[2] – he clearly looks for historical lessons and for a past that, when appropriately (and unconventionally) understood, can offer valuable policy prescriptions for today’s challenges. However, this approach is, at times, quite problematic. Wertheim’s analysis can be at the same time brilliant – like in the parts on the creation of the convenient myth of isolationism – and quite simplistic and binary. 1940-1941 was clearly a crucial watershed – that goes without saying. And yet the radical transformation of U.S. internationalism in a form of global armed dominance was: a) less radical, and a radical departure, than he wants us to believe; b) much more opaque, ambiguous, and contested, both within and outside the United States; c) pursued in tandem with a much more traditional understanding of what internationalism truly implies, first and foremost via the effort to expand a rule-based global order centered on international fora, multilateral diplomacy, and a constantly negotiated consensual hegemony. In summary, despite being important, as it certainly was, 1941 was not the 'big bang' of the modern international order (conventional as they are, 1945 or 1947 still appear more suitable, if we really need to date the genesis of our current world, which I do not think we do). And post-1941/World War II U.S. internationalism, along with the foreign policy it has inspired, has been many different things, global armed dominance being just one of them, and possibly not the most important.