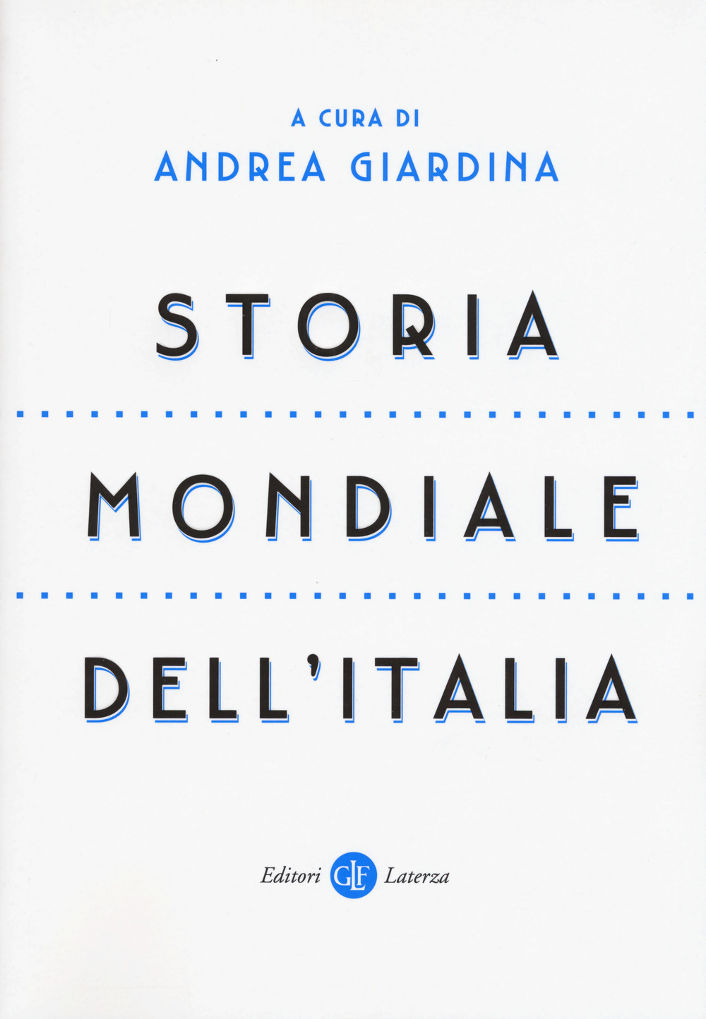 The glossy, 878-page-long Storia mondiale dell'Italia, edited by Andrea Giardina, Emmanuel Betta, Maria Pia Donato and Amedeo Feniello should perhaps be classified as a sophisticated coffee-table book – although, unusually, one with very few pictures, none in color – addressed to the wider public of keen, strong-wristed readers beyond academia, whose interest in history intersects a sensitivity for political debate. The editorial project follows its French model, Histoire mondiale de la France, edited by Patrick Boucheron and published in 2017 by Seuil to impressive sale success among the same kind of wider interested public the Italian version also strives to reach.

The book’s 180 chapters, written by over 170 authors, including the editors, are bite-size short, but with bibliographies and references. The volume is organized in 12 sections and allocates roughly the same space to Antiquity, the Middle Ages, the early modern period, and the modern one (i.e. post-1800). This choice, which conforms to the most traditional of chronologies, is perhaps less obvious than one might imagine, since in histories of this kind the remote past is often telescoped and compressed in substantially smaller sections, in favor of a more extensive coverage of the recent past. The general editor, Andrea Giardina, is a historian of Antiquity and his own sensibility may explain the balanced chronology to a large extent. Yet perhaps  there is  an implicit acknowledgment  of the seriousness of the choice (again, not an obvious one) to deal with "Italy" as something that exists independently from and long before the political or state forms that have claimed the name in Antiquity and then in the nineteenth century.

There are many reasons why a "world history of Italy" is bound to be a different project from its French equivalent. That there is such a thing as 'Italy outside Italy'' to begin with, is a notion that Italian readers have long been acquainted with, and the Storia d’Italia Einaudi gave it prominence and conceptual mass in 1974 (and it is worth noting that it was a duo of eminent Frenchmen, Jacques Le Goff and Fernand Braudel, who wrote the chapter on the subject). Historians of Italy, and perhaps Italian readers of history too, are probably less bouleversés by an approach that aims to dissolve, at least on the surface, a national narrative, in order to show instead the essential connectivity of the history of a country with that of the rest of the world. The effort serves the diasporic aspects of Italian history and identity well, which traverse the phases of imperial expansion from ancient Rome to Fascist Italy, and the phases of political subordination to powers originating outside Italy. Thus, the Storia mondiale dell’Italia happily eschews the notion of puissance, which dominates the structure of its French model. It refuses to suggest that a measurement of power and weight of "Italy" in the world, of rises and falls, should be either central or particularly interesting, not even when it covers traditional "high points", such as Roman imperial history, or the Renaissance.

Two themes emerge powerfully from the book. The first has to do with both the persistence and the dynamism of geographical frameworks in a history of Italy, the second with the fundamental role of migration and the movement of (primarily) people as a long-term trait of Italian history. A strong awareness of the interconnected and multi-layered geographies that oppose Italian to sub-peninsular identities is a distinctive feature of this project, and quite faithfully mirrors the distinctiveness of Italian political and institutional historiography on the subject since at least the 1970s. Local, regional, supra-regional, peninsular, supra-peninsular: no ambitious Italian history can exempt itself from a serious questioning of the dynamic interplay of these spatial levels, in a way that is not true of many other national histories in Europe and elsewhere.

In addition to this, a second striking element of the book’s geography is the importance of the Mediterranean as the primary geographical context where Italian history finds its place. Again, since the book is explicitly experimenting with a world history approach to Italy, it must be significant that the Mediterranean, its tri-continental coasts, cities, sea-routes and peoples, should emerge as by far the most frequent setting of the book’s chapters. It is difficult to say if this is primarily a by-product of the continued vitality of the Mediterranean as a historiographical category, or simply an unavoidable fact of Italian geography and history alike. Italian history is revealed implicitly, in many of the volume’s chapters, as essentially Mediterranean, more than, say, European, or Eurasian, and certainly more Mediterranean than Western. Since world history and global history are only just beginning to enter the mainstream of research and teaching in Italy, it is probably the case that other, non-Mediterranean, geographies, equally meaningful for Italian history, will prompt a readjustment of the emphasis away from the Great Sea. We are not there yet, however.

If the issue of geography is a pervasive but not an explicit question for the editors, the centrality of migration and the movement of people into and away from the Italian peninsula is foregrounded in the introduction, and remains apparent and consistent throughout the majority of chapters. Italy, it is suggested, has always been a destination and a place of departure, over the millennia both a center and a periphery. Hunters, refugees, soldiers, clerics, merchants, scholars, explorers, architects and painters, political and religious exiles, musicians and actors, scientists and factory workers, chefs and revolutionaries, terrorists and criminals: it is a dazzling array of individuals and groups who come to and leave from the Italian peninsula over the centuries – most of them, it has to be said, recognizable protagonists of histories of Italy and studies of Italian "identity" we have become familiar with since at least the 1990s.

One finds themselves thinking of the myriad other cases (less well known, more surprising, perhaps) that could have been included. Speakers of the Franco-Provençal language implanted in northern Puglia since the times of Charles I of Anjou could be juxtaposed to the speakers of northern Pugliese dialects who have been documented for the last two centuries in Crimea. We could have tried to learn more about the mysterious Katarina Vilioni, Genoese, whose fourteenth-century gravestone, also depicting her namesake scholar-saint Catherine of Alexandria, in Yangzhou, China, is so tantalizing, and then jumped from her late medieval tomb to the twentieth century one memorializing Anna Kuliscioff in Milan’s Cimitero Monumentale; Kuliscioff was Jewish, Russian, an anarchist, a feminist and fully, indisputably an engine of modern Italian politics. (Graveyards are of course great places for this kind of history writing, as demonstrated in Marco Meriggi’s chapter on the cemetery of Testaccio.)

Thinking of possible additions and alternatives, of course, can quickly become a frivolous and ultimately unfair exercise: the Storia Mondiale dell’Italia was conceived, commissioned, written and edited on a stupendously quick timetable, which must have left next to no time for research on entirely new subjects. Its authors generally write on topics they have already covered, recently or decades ago, in previous studies.

The absence of a Katarina Vilioni or an Anna Kuliscioff, however, speaks of a more general, and less forgivable fault. There are very few women in this world history of Italy, and indeed no women at all in the section of Antiquity (where the only woman cited by name is Cleopatra), and only one, the Catalan-Sicilian Catalina Llull, with a dedicated chapter in the medieval section. Representation is less imbalanced in the early modern and modern sections, but the volume generally neglects women's history and gender history, as well as the history of sexuality (there are some exceptions, notably on heterosexual masculinity, such as Roberto Bizzocchi's light-hearted treatment of cicisbei, or Olindo De Napoli's more serious focus on inter-racial sexual relations in colonial Eritrea). Perhaps even more surprising is the marginal space given to the history (social, cultural, economic) of the family, which, unlike women's and gender history, has been fully part of the mainstream of scholarship produced in and on Italy, at least since the 1960s.

Given the sheer number of contributors to the volume, it is tempting to read these absences as a reflection of the present state of historiography, particularly as it is practiced in Italy, and this may well be a sufficient explanation. It is also possible, however, to more generally  question the effects of a world or global history approach on the resulting picture, on those who tend to be included and those who are, unwittingly or not, excluded. It is a fact that the recent wave of global histories, and deep histories with a "world" framework (most of them produced in the Anglosphere) tend to thrust women (as historical agents) back into invisibility and often pay no more than lip service to a gendered approach to history. Is this a direct effect of the scale, the approach? Women are less likely to travel, build empires, spread religions, be engaged in long-distance trade – although some women did all those things. But there is no inevitability to such an absence, especially in a project like the Storia Mondiale dell'Italia, which strives to combine the focus of smaller studies with a "world history" perspective.

Indeed one could argue that the boundaries of insider-ness and outsider-ness form in the household, where a great deal of encounters take place and develop; most married women in the strongly patrilineal and patriarchal societies prevalent in Italy and elsewhere in the world over millennia were foreigners in their own households. Sexual encounters, in particular, invest and subvert the very core of "nativist" fantasies of ethnic or national homogeneity. There are, of course, plenty of examples of powerful foreign wives, who became decisive vectors of cultural transmission, occasionally over long distances. The presence of female domestic servants and slaves of foreign origin, with their strange accents, strange faces, and strange manners and beliefs, is a characteristic of Italian urban life well after the decline of ancient slave economies; these women shared spaces of the utmost intimacy with the "native" household, including often the forced sexual intimacy that contributed to the high rates of illegitimate children typical of medieval and early modern Italy. And surely there is a strong gendered specificity to the migrant and refugee experience, which varies with time and circumstances, but is true of the past as it is today. An inclusive, and even ideally an intimate world history is a necessary and urgent project, and probably one for which a public already exists.