Secretaries and Statecraft in the Early Modern World 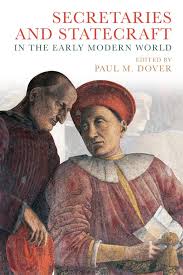 The development of the loosely-defined role of “secretary of state” has long been a subject of considerable interest to political, administrative, social, cultural, and diplomatic historians. Mark Thomson’s work on the development of the office in Stuart and Hanoverian Britain helped to stimulate the work of a generation of scholars keen to ascertain the limitations and challenges of the role. Paul Dover, the editor of the collection herein under review, has gathered together some excellent essays which aid us to contemplate the role of the secretary in early modern European political entities and beyond. The contributors focus upon the development of state bureaucracies and chancelleries, which in turn stimulated a proliferation of clerks, lawyers, and secretaries, each with increasingly specialized functions.

Isabella Lazzarini’s essay is a useful critique of this development in the Italian states of the Renaissance period: she points out the fact that states such as the Republic of Venice and the Duchy of Milan strove to expand their frontiers, which in turn gave rise to what she describes as “autocratic innovation”. Trained and competent secretaries thereupon emerged as essential conduits to the successful administration of the state, and their role became more and more political in nature as internal affairs blended harshly with the geopolitical and diplomatic realities of the Italian peninsula in the fifteenth century. As Toby Osborne rightly declares in his own essay: even in the late seventeenth century “there was no clear-cut inter-state ‘system’ monopolized by recognized sovereign states”. Secretaries and statesmen had to improvise and adapt to evolving geopolitical circumstances, all while treading carefully and warily observing the most eminent members of their rival factions. Rebecca Boone touches upon these themes in her essay on Mercurino Arborio di Gattinara, whose importance as imperial grand chancellor in the reign of Charles V was unquestionable. Gattinara was far more than a mere functionary – his views on the young Habsburg emperor’s responsibilities in an evolving Christendom anticipated those of Thomas Cromwell when in the 1530s the latter famously and somewhat prematurely described England as an empire. Megan Williams discusses the important roles and the vast workload of Bernhard Cles, Bishop of Trent and a successor to Gattinara as grand chancellor, as well as his secretaries in the Latin Expedition. This essay encourages us to consider how an empire could be governed by a capable statesman who organized his administrative machinery to maximum effect.

Rayne Allison’s contribution on Sir William Cecil and William Maitland, respectively secretaries of state for England and Scotland, presents the reader with an interesting analysis of their parallel rises to power and influence. The extraordinarily diligent and tireless Axel Oxenstierna is the subject of Erik Thomson’s chapter, which charts his pervading influence on Swedish policy during the reign of Gustav II Adolf and the minority of Queen Christina. The relatively underdeveloped Swedish state bureaucracy meant that talented diplomats were scarce in the Vasa kingdom; as a result, Oxenstierna had to micro-manage Sweden’s war effort by negotiating in person with Swedish allies while also dealing with a wide variety of domestic political business. The theme of a secretary or minister-favorite asserting their power in times of crisis for a tottering state endures in David Parrott’s essay on Cardinals Richelieu and Mazarin, which critiques the failures of both men to manage effectively France’s engagement in the Italian theatre from the 1630s to the 1650s. As Parrott and others have argued in the past, in order to preserve their grasp on the reins of authority, both ministers felt compelled to create private networks of patronage, and to promote and maintain their clients in sensitive military and diplomatic roles. Toby Osborne presents us with the case of the abate Cesare Alessandro Scaglia di Verrua, scion of a powerful Piedmontese dynasty, whose diplomatic activity (skilfully chronicled in Osborne’s first book) ultimately rendered him odious to his sovereign, Vittorio Amedeo I, duke of Savoy-Piedmont. Osborne points out that Scaglia enjoyed a degree of liberty during his diplomatic missions in the 1620s, but that this freedom from ducal constraint was not necessarily a blessing.

Afzal Khan Shrirazi is the protagonist of Rajeev Kinra’s chapter on the equivalent of the office of secretary in the Mughal empire, and this contribution reminds us of the fluidity of opportunities for a skillful politician. Kinra emphasizes Afzal Khan’s “learning, administrative acumen and diplomatic experience”, all of which – along with his linguistic skills – were crucial in his steady rise to a position of power. The evolution of political changes in Safavid Iran is the subject of Colin Mitchell’s highly interesting piece. Shah Abbas had a highly efficient working relationship with Hatim Beg Urdubadi, who effectively served as his chief minister, thus enabling the latter’s enactment of important reforms. Russell Martin provides a detailed and well-crafted chapter on the exiled Russian clerk (and probable spy) Grigorii Karpovich Kotoshikhin, whose manuscript on the Muscovite political system and the Romanov court is a fascinating description of conditions in a country which was still, relatively speaking, terra incognita to most Europeans by the end of the seventeenth century. Daniel Riches presents an equally intriguing contribution on Eberhard von Danckelman, and reveals the difficulties the historian faces in measuring the impact of a statesman’s actions in any given period: Danckelman was depicted by contemporaries as being the antithesis to his incompetent political rival, and therefore it is difficult to gauge the true extent of his role as a secretary. Riches also highlights Danckelman’s failure to build up a “party” at the court of Brandenburg, owing to his lack of the social graces essential for any courtier in this period. Moreover, his loyalty to his original sovereign, William of Orange, shaped his attitude to European politics, in much the same way that Mazarin’s Italian heritage dictated his focus on Italy during the Franco-Spanish War. The final essay in this rich collection concerns yet another eminent statesman who needs little introduction to the political historian: Wenzel Anton von Kaunitz. Franz Szabo gives a helpful potted history of conciliar reform in the Austrian Habsburg monarchy, and establishes both how Kaunitz was able to set his own conditions for accepting the vital post of chancellor; and the procedural changes he introduced.

As a whole, this collection is a supremely important acquisition for the scholar of early modern government and administrative reform, and the contributors are to be complimented for providing enjoyable and highly readable essays which are also based on solid and exciting research.