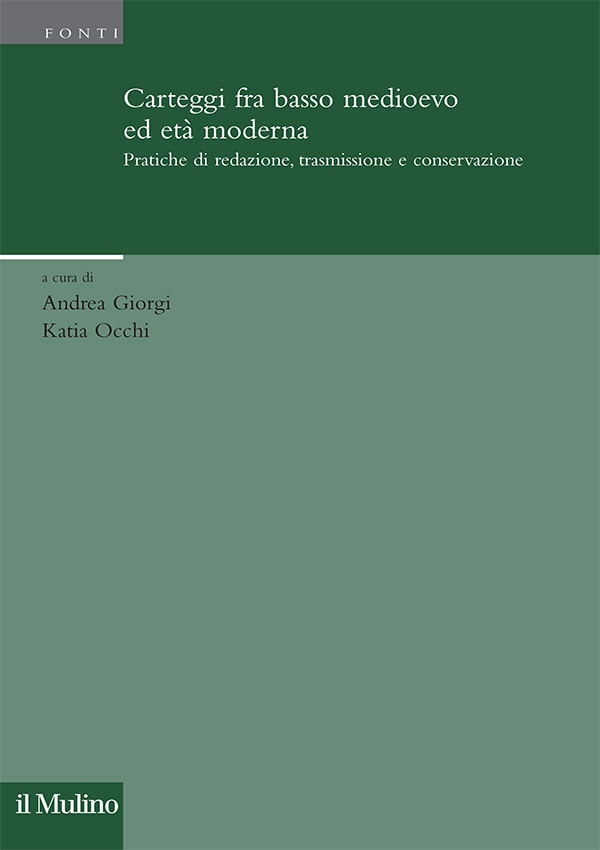 Printed by Il Mulino on behalf of ISIG, the Italian-German Historical Institute, the book series Fonti is well-known to specialists. Over the years, it has published editions of a variety of historical sources, with a preference for those related to the history of Trento, its region, and the prince-bishopric, which defined much of their history. The book in question is but the latest addition to the series. While it is not directly concerned with presenting unpublished texts to the public, the volume provides a wealth of new material and reflections around a type of source which has been the object of much attention in recent years: letters and especially archives made up of letters, which is to say bodies of correspondence (carteggi, in Italian).

The volume originates from one of the several projects launched by ISIG in an attempt to reconstruct the shape and content of the prince-bishopric’s archive in the early modern period. Drawing from the collections of Trento’s municipal library, one of these initiatives traced and examined over 7000 letters addressed to the bishop or his collaborators. As the project reached its completion, ISIG hosted a two-day workshop, on the occasion of which the papers collected in this volume were first presented. Like the book itself, the workshop aimed to present the outcome of the research conducted within this initiative, while also locating them within the broader scholarly context. As the volume’s subtitle already indicates, three were the areas to which contributors paid particular attention: the drafting of letters (redazione), the transmission of letters (trasmissione), particularly as recognized bodies of correspondence, and their subsequent handling and archival conservation (conservazione).

The book could be divided into three parts. The first collects papers considering the correspondence of a number of Italian polities. To start, Isabella Lazzarini provides an overview of the writing and preservation of diplomatic dispatches in the Italian Quattrocento, looking particularly at northern principalities (the duchy of Milan, the marquisate of Mantua and the various dominions of the Este family in the Po valley). In turn, Armand Jamme writes about the Papacy, and specifically about the role of correspondence in governing and communicating with the sparse lands of St Peter in the thirteenth century. Andrea Giorgi considers the letters and registers of letters produced by the Concistoro, Siena’s chief executive council, during the performance of its duties. Giordano Brunettin seeks to frame and classify the records sent by the patriarchate of Aquileia in the fourteenth century. Lastly, Francesco Senatore examines the circulation of administrative letters in fifteenth-century Naples, and especially their intersection with the mechanics of financial control, legal revendication, and political memory.

The book’s second part consists of only two chapters, but provides a much-needed transnational – though not quite comparative – perspective to the volume. The section opens with a piece by Christina Antenhofer, in which the author traces the correspondence of the counts of Gorizia from its original state as a family archive in the late middle ages to its integration with the archives of the polity which then absorbed the county and its records (the Habsburg monarchy, notably through Innsbruck’s Tiroler Landesarchiv). This is followed by a stand-alone essay by Olivier Poncet, which offers a comprehensive look at the traditio of royal letters in early modern France: their making by state secretaries, their recording in chancery registers, their occasional filing and preservation by official magistracies or – more often – by single individuals, and finally their acquisition and reorganization on behalf of both private collectors and public archives.

The third and final part of the book comprises chapters concerned almost exclusively with Trento and its bishops. The first is an essay by Katia Occhi, in which the author recounts the entire history of the prince-bishopric’s archive: its medieval origins, starting with the noted Codex Wangianus; the fundamental surveys and re-organizations conducted in the first half of the sixteenth century, under the impulse of Bernardo Cles; its temporary disbandment in the early nineteenth century, due to the secularization of imperial bishoprics; and finally its partial re-aggregation in Trento’s main archival deposits (the Archivio di Stato, the Archivio Diocesano and the Biblioteca Civica). While not explicitly focused on epistolary material, the essay serves not only as a precious guide to the archival history of these collections, but as an institutional backdrop for the two chapters that follow it. In one, Massimo Scandola uses the material held in Trento’s municipal library to study the correspondence of the secretaries and agents working for the bishop. In the other, Alessandro Paris follows the career, interests and contribution of one of these officers: Vigilio Vescovi (1610-1679).

All essays are extensive and provide much new information, including a large number of illustrations as well as both short and long transcriptions from the letters themselves. There is no space here to comment on each of them; however, it is important to note that, together, this volume’s chapters showcase the plurality of issues one could and indeed should consider when approaching bodies of correspondence, while also exhibiting the different sensibilities of scholars from different fields. To start, their scope ranges from comparative overviews (Lazzarini, Ciappelli, Poncet) to individual case-studies (Giorgi, Brunettin, Senatore). Many of these take their cue from the survival of coherent bodies of correspondence, typically as the result of the operations of a specific chancery or institution, while fewer are devoted to investigating their place alongside other texts (Antenhofer, Occhi, Scandola, Paris). Some authors are especially concerned with categorizing letters, and with investigating their formal structure and material dimension (Giorgi, Brunettin, Senatore, Scandola). Others are interested in the intersection between correspondence and political communication – being this between states (Lazzarini, Ciappelli) or within them (Jamme, Giorgi, Senatore, Poncet). Others still pay particular attention to the people who issued, handled and preserved letters, and to what we know about their social and cultural background (Brunettin, Poncet, Scandola, Paris).

Much like the approaches mentioned above, the methodologies employed by the authors are many and often complementary: from the history of archives and administration to information history and diplomatic. While the volume as a whole does not adopt a unified methodology, several of its chapters move from similar premises. Poncet and Occhi show that the displacement and re-arrangement of letters should be studied over long periods, so as to relate the many different people, archives, and institutions that came into contact with the material over the centuries. Both Lazzarini and Scandola make a case for an integrated approach to the history of letters, one that sees them as part of textual systems formed by coexisting stages and forms (drafts, originals, and registered copies) as well as different and often intertwined layers (as in the case of the domestic and official correspondence of princes). Similarly, Senatore and Ciappelli draw on their extensive experience as editors of diplomatic letters to comment on the possibilities offered by series which might not be as complete or uniform as those we already know only too well, but could still be reconstructed virtually and made available online, either as simple catalogues or as full-length editions.

At the end of the book, an afterword by Gian Maria Varanini traces the steps which, over the last three decades or so, have led to such a rich array of interdisciplinary perspectives: from the traditional study of carteggi as mere containers of letters to the notion of archives as objects worth studying in their own right, passing for a renewed and now widespread interest in the history of written communication and pre-modern culture at large. In addition to offering an initial review of the volume, his brief contribution highlights that there is still a need for further dialogue among historians of different denominations, as well as among historians, archivists, and scholars of diplomatics. In this sense, the book in question is but another example of the fruitful dialogue which projects of this kind can foster; but it is also a reminder of the importance of incorporating local and regional initiatives, such as that which prompted this very volume, into the wider scholarly debate – and vice versa, of the role of these initiatives in driving the field forward.