Science Studies during the Cold War and Beyond 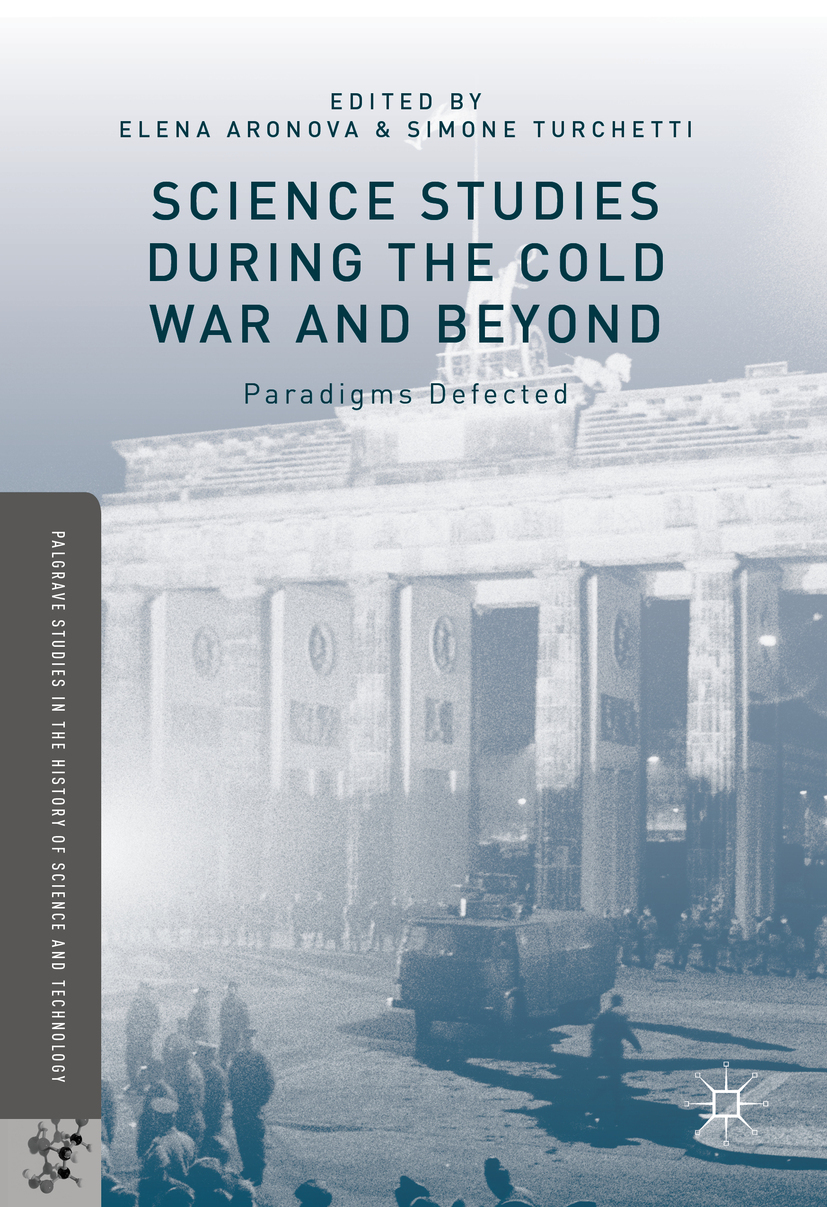 Elena Aronova is the author of fundamental essays on the history of the studies of science in Cold War America and the Soviet Union. Co-edited with Simone Turchetti, this volume explores the Cold War politics of “science studies” in less familiar historical contexts across the East-West and Global North-South settings of the Cold War.

The book is articulated into three parts. The first section examines the development of science studies in the US, UK, and Western Europe, showing how the work of Thomas Kuhn, Paul Feyerabend, and Paul Forman, among others, was informed by Cold War anxieties. In this part, two different contributions are dedicated to Thomas Kuhn’s Structure: on the one hand, George Reisch elaborates a parallelism between Kennan’s 1946 “long telegram” and Kuhn’s “long monograph” (the first version of the Structure), based on Conant’s mediation as well as on the surrounding Cold War discourse on the power of ideology to divide humanity into incompatible communities; on the other hand, Hans-Joachim Dahms contests the depiction of Kuhn as a Cold-Warrior, by emphasizing on the contrary how Kuhn owed many of his ideas to sources which preceded the Cold War, especially Ludwik Fleck and Michael Polanyi. Another iconic figure – Paul Feyerabend – is at the center of Ian James Kidd’s essay. According to Kidd, the Cold War affected Feyerabend’s philosophy of science in two different ways: first of all, Feyerabend reacted against the apolitical and purportedly “neutral” conception of the discipline, by explicitly calling for a socially engaged philosophy of science; secondly, he challenged the dogmatic and ideological vision of science as the mark of a modern, progressive culture on which the Cold War confrontation was grounded. The final contribution of this section, by Simone Turchetti, traces the transnational flow of knowledge within the mid-1970s international radical science movement, detailing the ways in which the field of “science studies”, from the sociology of scientific knowledge to Paul Forman’s “distortionist hypothesis” was influenced by radical scholars in the UK, US, and Italy.

The second part of the volume explores the reconfiguration of “science studies” behind the Iron Curtain, especially in the aftermath of Stalin’s death in 1953. Two chapters consider how the Hungarian Revolution of 1956 and the Polish October uprising the same year impacted on “science studies” in these two Soviet satellites. In Hungary, according to Gabor Pallo, a significant division emerged after 1956 between Hungarian philosophers of science living outside (Lakatos, Polanyi, Koestler) who frequently criticized Soviet-type socialism as well as the centralized model of science policy, and mainstream historians of science in Hungary who assumed a “practical”, “atheoretical” attitude, isolating themselves from the political and ideological tensions of the philosophy of science. In Poland, the Stalinist reconfiguration of “science studies” in the 1950s and 1960s along the lines of a rigid dialectical materialism cancelled the prestigious tradition of prewar Polish “science of science” (naukoznawstwo), including Ludwig Fleck and Stefan Amsterdamsky. Therefore, every protest movement – in 1956, 1968, and the 1980s-1990s with Solidarity – was accompanied by the anti-Soviet revaluation of the autonomous development of naukoznawstwo. With regard to Czechoslovakia, Vítězslav Sommer analyses the origins and transformations of Radovan Richta’s theory of scientific and technological revolution (STR), showing not only the links between reformist communism and the notion of “scientific civilization”, but also the evolution of the STR theory into a schematic developmental and technocratic theory as a result of the repression of the Prague Spring.

Finally, the third part of the book is devoted to the politics of science studies beyond the bipolar political framework of Cold War East-West divide: respectively, in neutral Sweden, in postcolonial nations of Latin America, and in communist China. Due to its geopolitical neutrality and its “third way” political economy, the case of Sweden, as Aant Elzinga highlights, represents an interesting and somewhat unique bridge between West and East with regard to scientific and cultural exchanges structuring the field of “science studies”. Federico Vasen focuses particularly on the debates on “national science” in Argentina in the late 1960s and early 1970s, by distinguishing three different models: the universalistic view, connected with modernization theory and the logical-positivist consensus in philosophy of science (Bunge); the “science with national traits”, combining universal method and local research agendas (Klimovsky); and the radical approach, based on a fundamental intertwining between scientific method and revolutionary political and social projects (Varsavsky). The last chapter, dedicated to China, documents how the local agenda of “dialectics of nature” changed over time from the “Lysenkoist” version of the 1950s, during the period of Sino-Soviet cooperation, to the scientific techno-nationalism of the Deng Xiaoping period, in the 1970s and 1980s. Only in the 1990s the “dialectics of nature” was replaced by the “philosophy of science and technology” and constructivist approaches became popular.

The breadth of scope of this collection is both its strength and weakness. The book provides a much-needed plural description of the different local agendas which defined and shaped the boundaries of “science studies” in the geopolitical and intellectual context of the Cold War. This wide scope also results in a somewhat partial and fragmented account. There are issues that this book does not exhaustively address. The transnational circulation of knowledge between East and West; the boundary-work between “science studies”, science policies and history of science; and the multiple connections with fundamental Cold War controversies, such as the “Lysenko affair”, are not thoroughly explored.

Nevertheless, these minor quibbles do not detract from the relevant achievements of the book, which not only represents an important contribution to the comparative history of “science studies” and the Cold War, but also reveals a vast territory still poorly surveyed.