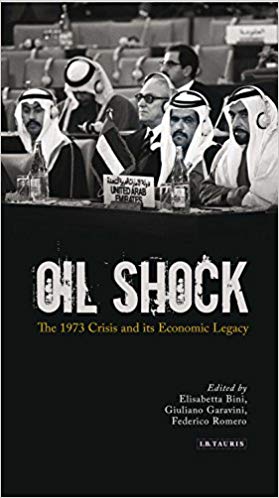 The volume under review originates in a conference, which was held at the European University Institute in Florence on the occasion of the 40th anniversary of the first oil crisis in 2013. Despite its title, however, the crisis of 1973 itself is conspicuously absent from most of the articles. As the editors explain in their short introduction, the contributions are dedicated instead to the longer-term causes of the oil and energy crisis of the early 1970s as well as to its legacies. In general, they concur with newer research that has established that the “oil shock” did not come as suddenly and unexpectedly as is often claimed.  Despite this slightly revisionist agenda, the editors still argue that the changes in the international oil economy, which crystallized around the price increases and production cuts in 1973/74, were a pivotal event that changed the “social and economic metabolism of industrialized societies, of ‘underdeveloped’ or emerging economies, and even of the international system as a whole” (p. 3). Their second major interest, which however remains rather elusive throughout the volume, is to disentangle how “the oil crisis affected, and was affected by, concurrent processes of globalization” (p. 5). As the oil economy has always been global and globalization is often conceptualized as an all-pervasive process that accelerated in the 1970s, it is not really clear what meaningful answers the editors expect in this respect and most articles abstain from concrete references to globalization.

The editors divide the volume into two broad sections “Origins” and “Consequences” but several articles in the section on consequences might have been better placed in the section on origins as they mostly deal with events leading up to the crisis in 1973. The articles most directly addressing the origins and consequences theme of the volume concern the development of OPEC and the role of the major oil companies before the oil crisis, on the one hand, and the expansion of non-OPEC oil supply and the recycling of petrodollars, on the other. The former Venezuelan governor to OPEC, Bernard Mommer, offers a broad sketch of the “shocking history of oil”, focusing mainly on the role of private and national oil companies. In his analysis of the events leading up to the Tehran Agreement, Francesco Petrini argues more concretely and convincingly against both conspiracy theories, which suggest that the major oil companies orchestrated the oil crisis, and accounts of the oil crisis that view the majors as mere passive observers on the sidelines. Rather, he shows how their business model was challenged by factors they could not control and how they adjusted to a new international political economy. Agreeing with Petrini on the overall role of the companies, Tyler Priest offers a concise overview of how the oil crisis engendered the expansion of oil production in the North Sea, Alaska, the Gulf of Mexico and Brazil as well as in ever more remote and technologically challenging areas. In early 1974, it became clear to Western decision makers that the most significant problem they were facing was not a lack of oil but the accumulation of wealth in the oil-producing countries. William Glenn Gray carefully analyses the different attempts to recycle petrodollars. For the case of Germany he suggests that the new volatility on the financial markets reaffirmed older traditions of fiscal policy rather than ushering into a new era. In the volume’s closest analysis of political decision-making during the oil crisis, Christopher R.W. Dietrich scrutinizes Henry Kissinger, affirming that the highly esteemed diplomat was mainly concerned with issues of peace-making and international power balance and not very well versed in matters of oil.

As in many edited volumes, contributions are very heterogeneous and of varying quality. Oscar Sanchez-Sibony offers a brief and lucid overview of the energy relations between the Soviet Union and Western Europe from the beginning of the Cold War to the gas pipe deal in the early 1970s, while Martin Melosi analyses the history of nuclear energy in its relation to the rise of environmentalism in the United States. While these are convincing treatises in themselves, it is hard to grasp how they are supposed to speak to the overall theme of the book. The same holds, to a lesser extent, for Philippe Tristani’s study on the end of the Iraq Petroleum Company between 1958 and 1972. Marloes Beers’ examination of the workings of the OECD’s Oil Committee and its High Level Group oil addresses the attempts of Western collaboration on matters of oil even in the years preceding the oil embargo and production cuts but fails to establish her thesis convincingly that the origins of the International Energy Agency have to be located there. Finally, Brian Black offers a rather essayistic treatment of the American infatuation with big and gas-guzzling cars, which contains nice and suggestive formulations but only few arguments.

The volume, thus, leaves a mixed impression and would have greatly benefitted from a more thorough attempt to bring the papers into conversation with each other, fleshing out the many and interesting contradictions between them. Was the oil crisis of 1973 the pivotal event for the changes in the global economy of energy, as Mommer suggests, and what was the role of the many preceding attempts to restructure it, which the other articles document? Does it make sense to speak of an “Oil Cold War”, as Tristani does in the title of his paper on Iraq, if we consider the smooth and intensifying East-West energy relations, which Sanchez-Sibony describes? Was 1973 significant because Western industrialized nations experienced a “moment of true resource scarcity” (p. 199), as Brian Black seems to think or did oil and energy never become scarce, as Priest argues, and its significance was smaller or has to be found elsewhere? These are just some of the questions, which the volume evokes but does not answer as it assembles a number of articles without making the effort to integrate them into a more coherent whole.