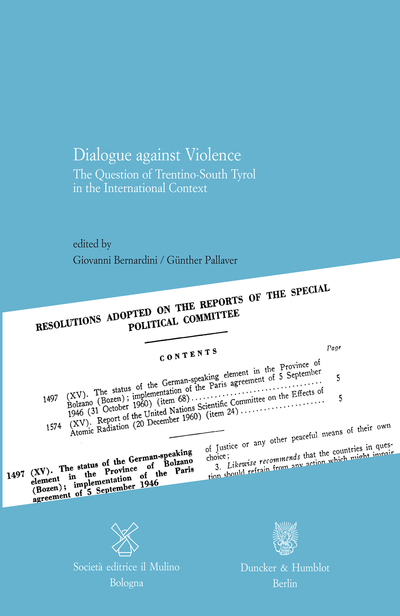 Anyone who concerns herself or himself with literature on the Trentino-South Tyrol Question will discover that this historical chapter is far from finished business, but rather history in the making. The edited volume of Giovanni Bernardini and Günther Pallaver vividly illustrates the different perspectives and interpretations of the events surrounding the history of Trentino-South Tyrol’s autonomy and the critical importance of these viewpoints for a broader understanding of the region’s history.

In the book’s introduction, the authors emphasize what differentiates this volume from other research on the Trentino-South Tyrol question. They do not claim originality for investigating this topic’s relevance to European and international history themselves. Rather, what makes the book innovative is its authors’ shared decision to review this historical chapter not only from an international perspective but also through the prism of autonomy, which was first established by the 1946 Gruber-De Gasperi Agreement, and then – after a decade of intense negotiations interspersed with violence – by the so-called Second Statute of 1972. On the surface, this approach might seem repetitive, and admittedly there is some overlap between the essays. However, the opposite is true – in fact, the book’s comprising consistently varied contributions by recognized professionals in their fields is both convincing and compelling. The essays explore the complexity, interconnectedness, and international relevance of the Trentino-South Tyrol question from 1918, the year of annexation to Italy to 1972 and the Second Statute of Autonomy. The title of the book, Dialogue against Violence, suggests the common denominator that links the ten individual essays. Not terror, but Austria’s and Italy’s willingness to negotiate and communicate as well as the internationalization of the Trentino-South Tyrol question via the United Nations, ultimately led to the peaceful settlement of the South Tyrol issue.

After a brief introduction, which presents a basic overview of the volume, the first two essays, by Andrea Di Michele and Eva Pfanzelter reveal distortions of the collective or historical memory of South Tyrol. Di Michele describes the first four years after the annexation of South Tyrol and Trentino to Italy (1919 to 1923), which have found no place in the historical memory of South Tyrol as they were quickly overshadowed by the events of the fascist era. Pfanzelter, on the other hand, focuses on the Option Agreement as one of the central places of remembrance of post-war South Tyrol’s collective memory, drawing a thread between the Option, victimization, and autonomy. For Pfanzelter, the victim thesis played an important role in the battle for independence and the legitimization of autonomy.

Maurizio Cau’s essay focuses on Alcide de Gasperi and his goal of autonomy for the region after the First and Second World Wars. In doing so, Cau reconstructs De Gasperi’s unremitting battle for autonomy and decentralization – with South Tyrol and Trentino as a “testing ground” for his concept of autonomy. By contrast, Paolo Pombeni and Rolf Steininger consider the international dimension of the South Tyrol question after 1945 in their essays. While Pombeni places his emphasis on the views of Italian-speakers, Steininger focuses more on the German-speaking perspective and the international discourse highlighting a variety of reactions and opinions on the South Tyrol question. Still, both authors find common ground by mutually emphasizing the importance of the Gruber-De Gasperi Agreement of 1946. They contend that without this agreement, it would not have been possible to take the South Tyrol case before the UN or grant the region its autonomy. Also, both agree that the election of the center-left government in Italy, led by Aldo Moro, represented an important turning point on the South Tyrolean issue.

In the next contribution, Giovanni Bernardini focuses on the Second Autonomy Statute and shows the unusual course the South Tyrol question took after 1945 in contrast to the more general resurgence of ethno-nationalism in Europe. Miriam Rossi and Federico Scarano continue the examination of South Tyrol in the international context. Rossi focuses on the UN debate in the early 1960s, which concerned the motivation behind Austria’s hope for South Tyrol’s self-determination or even a shift in borders. Scarano traces the negotiations and political discourse in Austria and Italy that ultimately led to the formation of the so-called Commission of 19. This commission comprised state representatives as well as representatives of the province’s three linguistic groups to study the South Tyrolean issue from all perspectives and to provide suggestions for its resolution.

In his essay, the Danish scholar Peter Thaler asks how the rebirth of Austria’s national identity after World War II affected the South Tyrol question, and why South Tyroleans were still considered Austria’s responsibility when other German minorities such as the Gottscheers or the Sudeten Germans were not. The book concludes with Günther Pallaver’s insightful essay on South Tyrolean terrorism. Pallaver looks not only at three phases of terrorism in South Tyrol and its pacification but also considers the phenomenon from an international perspective and places the events into a theoretical framework.

In general, this book offers a holistic view of a central chapter of South Tyrolean history. Attention to the media and discussions of the Italian public on the question of South Tyrol, however, are still missing. These small problems notwithstanding, the individual essays illustrate the many different perspectives that shed light on the Trentino-South Tyrol question, the circumstances and public discussions affecting decisions after the annexation of the region to Italy, and how different historical interpretations and collective memories can be. This book is a valuable addition to existing literature on this issue and is highly recommended. Anyone interested in a broad overview of the South Tyrol-Trentino question would be well-served by this book.