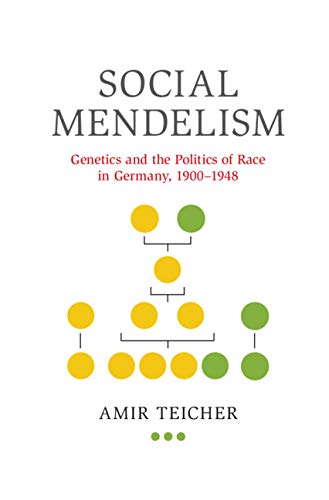 In the vast historiography on eugenics and racial science, the role of Mendel’s theory has been widely acknowledged. But what do we talk about when we talk about «Mendelism»? In many historical accounts the actual analysis of the notions of heredity involved in the elaboration of the eugenic discourse is often neglected and «Mendelism» is superficially treated as mere synonym of «hard heredity» and «biological determinism».

As it is apparent from its title – Social Mendelism – the chief novelty of Teicher’s book lies in the sophisticated attempt to disentangle the numerous and different threads which characterize the gradual incorporation of the Mendelian thinking into Nazism, not only in terms of scientific theories but also as part of a broader biological and cultural Weltanschauung. The book moves from research practices to racial policies and genocide, following a complex pattern of concentric circles. In the first two chapters, Teicher demonstrates how Mendelism gained momentum between 1913 and 1933 in the disciplinary fields of genealogy, psychiatry and anthropology, not so much as a method of inquiry or an experimental procedure, but as a conceptual framework and a regime of legitimization: to «mendelize» a scientific field – as Eugen Fischer (in anthropology) and Ernst Rüdin (in psychiatry) well understood since the early 1910s – meant to be modern, to be «biological», to be at the frontline of science. But embracing Mendelism was not an easy task. While genealogical research eventually rejected the Mendelian logic, the professional and scientific fields of psychiatry and anthropology proved to be far more receptive. In dealing with psychiatry, Teicher effectively challenges the distinction made by historian Pauline Mazumdar between two styles of human genetics in interwar Germany, counterposing Rüdin’s statistical and non-Mendelian studies to the Mendelian approach that characterized blood type research. While Rüdin’s «empirical hereditary prognosis» (empirische Erbprognose) did not rely on Mendelian assumptions, Mendelism remained widely used in psychiatric scholarship, namely in research on schizophrenia and in new, «modern» rearrangements of Kraepelinian psychiatric nosology. In the same vein, Mendelism exerted a significant influence on physical anthropology, namely on craniology and blood research, although the Mendelian approach was focused on individual traits and features more than on whole «races» and entire «types».

Even before Hitler came to power in 1933, the transformation of Mendelism from a research framework to an interpretative scheme paved the way – as Teicher brilliantly argues in Chapter 3 – for its next metamorphosis into a social theory, a framework of human improvement and «national resurrection». The emerging of «Social Mendelism» in 1920s Germany followed a two-fold path: on the one hand, fears of contamination, impurity and degeneration that were widespread in nineteenth-century medical discourses became localized in the concept of recessive genes, transforming the Ostjuden, long stigmatized as spreading germs and disease, into carriers of recessive, invisible and harmful dispositions; on the other hand, the idea of gametic purity legitimized the racial myth of a Nordic race that had remained substantially unaltered through time, especially in remote rural areas, and was ready to be resurrected through properly directed reproduction.

Transformed into a cultural framework for understanding racial purity and hybridity, the Mendel’s theory became a powerful political and propaganda weapon in Nazi Germany.  Chapter 4 shows how developments within Mendelian research led to the inclusion in the 1933 Sterilization Law of specific diseases – blindness, deafness, Huntington’s chorea, schizophrenia – which were regarded as fundamental examples of Mendelian processes:  Huntington’s chorea exemplified dominant inheritance; deaf-mutism demonstrated recessive inheritance; glaucoma’s pedigrees illustrated sex-linked inheritance; schizophrenia was regarded as dihybrid recessive. 'Mendelizing' the Sterilization Law was a crucial step towards the overall legitimization of the campaign. Mendelian reasoning – and particularly the concept of recessive inheritance – contributed to radicalize Nazi eugenic thinking by annihilating the ability of individuals to object to the decisions of the Hereditary Courts: the actual health of individual was seen as merely external, possibly hiding and carrying an inherited disease in its recessive form. The sterilization policy was therefore carried out on the basis of clinical and mental diagnosis but relied on Mendelian supposition. Similarly, Nazi antisemitic racial policy was implemented with the help of genealogical methods but was informed by Mendelian assumptions (p. 167). In the discussions that led to the formation of the supplemental decree to the Nuremberg Laws – Teicher argues – Mendelian theory was a constant point of reference. In the racial indoctrination of young Germans between 1933 and 1936, the connection between Mendel’s theory and State racism was made clear: in the hands of Nazi educators, Mendelian teaching, racial science and racial legislation became profoundly intertwined. Furthermore, Mendelian anxieties concerning the eventual recoupling of recessive Jewish traits shaped Nazi policies towards the Jewish Mischlinge: identifying and eradicating recessive Jewish genes came to define a Mendelian-oriented approach to the Final Solution.

The legacy of Social Mendelism survived the collapse of the Third Reich. A short epilogue in the book is dedicated to this issue. The new context of post-war anti-racism and Cold War science contributed to redesign the notion of Mendelism as an a-social and anti-racist theory of heredity, ready to counter both Fascism and Lysenkoism. Nevertheless, a racial-antisemitic worldview continued to characterize German post-war eugenics and its efforts to resume the sterilization campaign.

Clearly argued and beautifully illustrated with diagrams, pedigrees and photographs showing the impact of the Mendelian framework on various domains of social and scientific thinking, Teicher’s book presents two fundamental merits. First of all, it elegantly demonstrates how Mendelian thinking was smoothly incorporated into the complex and variegated spectrum of Nazi antisemitism and racism, adding a sort of biological/deterministic flavour to pre-existing antisemitic and racial fantasies. Social Mendelism gave biological visibility to invisible cultural and social threats, thus reinforcing the palingenetic and disruptive potential of Nazi racial policies. The myth of the «Jew inside us», for instance, could materialize into a recessive trait, a concrete biological entity hidden within the national body and that needed to be eradicated.

Secondly, although focused on racial science, Teicher’s book goes well beyond the laboratories and university halls, while exploring the impact of Mendelian thinking in practice, in the actions of schoolchildren, legislators and bureaucrats or in the perceptions of citizens targeted as hereditarily diseased or categorized as Mischlinge. From the point of view of the classroom – as some of the most intriguing passages of the book lucidly reveal – the role of Mendelism in the process of biological indoctrination emerges from below, from reports documenting both teachers’ pedagogic intentions as well as students’ reactions and objections.

For these reasons, Social Mendelism enriches our understanding of the relationship between Mendelism and eugenics and provides a fascinating study into the complex interaction between science, culture and racial policies in Nazi Germany.