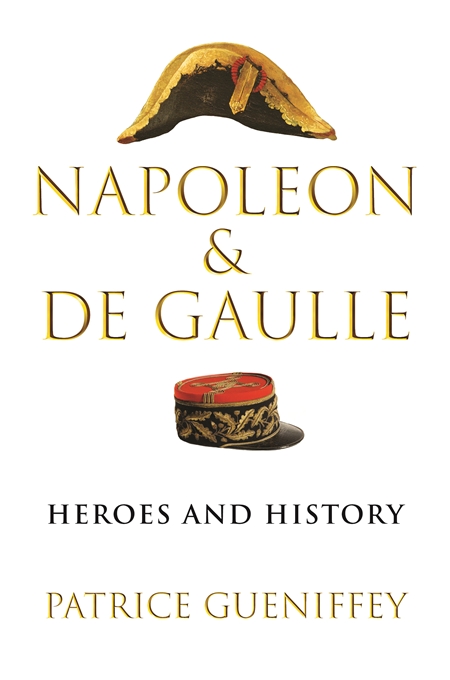 Napoleon Bonaparte and Charles de Gaulle are the overarching figures of modern French history. The first was swept to power in the later phase of the French Revolution; he secured its main achievements, brought large parts of Europe under French rulership and exerted a huge influence over the future course of European history. He ended in the solitude of exile and died at the age of 51. The second entered French history only at the age of 50, after having led the ordinary life of an army officer before. Twice, under the auspices of extraordinary crises, he pretended to seize the destiny of France: first when he declared the resistance to German occupation in June 1940 and then when he put an end to a seemingly moribund Fourth Republic through a quasi coup d'état in 1958. Both set themselves up as heroes and were admired as such by the French public. The citizens considered both of them as saviors: Bonaparte for having put an end to the turmoil of the revolutionary period, de Gaulle for having saved France's honor in its darkest hours of the summer 1940.

The book by Patrice Gueniffey is not to be considered a comparative study on those two political heroes. It is more of an essay on French history and the way the two statesmen approached certain key elements of heroism. The first chapter deals with the leitmotif of the return of the hero, essential for the mythology around both figures: Napoleon's return from Elba in order to put an end to the Bourbon restauration and exercise power again for 'Hundred Days' and de Gaulle's comeback after his 'exile' in his country home of Colombey-les-deux-Eglises in the last years of the Fourth Republic. The next two chapters deal more closely with the issue of 'greatness' and what makes a figure into a historical hero. Gueniffey shows that both statesmen not only left an indelible trace on modern French history but were also obsessed with their own place in history, despising mediocrity and the day-to-day routine of simply administering a country. They were fascinated by the agency of human beings and the possibility to strongly impact the course of events. A fundamental instrument for forging their own hero-myth was language and writing, a topic approached in the following chapter. The final chapter looks into the way the heroes dealt with the end of life and how their posthumous fame evolved.

One could hardly imagine an author better equipped for such a study than Patrice Gueniffey. He is the author of many publications on the revolutionary period and the First Empire, among them a monumental, 1000-page biography of Bonaparte reaching until 1802. He is an extraordinary erudite author, writing in a graceful style, elegantly translated into English by Stephen Rendell. Gueniffey is a disciple of the famous historian of the French Revolution François Furet, who was himself a sharp detractor of the founder of the Fifth Republic, criticizing Gaullism as a «decadent Bonapartism». Gueniffey gives ample place to such critiques, but it is obvious that he himself remains an admirer of both Bonaparte and de Gaulle. One of the most interesting parts of the book is the introduction to the English-language edition, in which the author places the French hero-worship into a broader, international context. He explains that the predilection of the French for «great men» is also a consequence of a certain political immaturity of the people. The deeply enrooted individualism of the French finds its negative consequences in a certain incapacity for democracy, in the sense of fully embracing participatory civil rights and watching over the lawful exercise of power. At various instances of their history, the French thus gladly relinquished their sovereign rights, in order to delegate power to an extraordinary figure, who should lead them like a father figure. The need for heroes is thus also part of the search for unity in a country shaped by a puzzling diversity and a lack of deeply enrooted political institutions.

The book is clearly shaped by a certain nostalgia of times when daring and dauntless leaders like Bonaparte and de Gaulle would try to make the French rise above themselves and accomplish the greatness of their nation. Due to globalization and Europeanization, the times of glory and greatness of our nation states are over. However, France has now to live with a constitution thought out by de Gaulle and tailored for a great man or woman at the top, exercising the overarching position of President of the Republic. The loss of sovereignty of our nation states makes it virtually impossible for the President to live up to the expectations placed in his role. Thus, an almost incessant disappointment about the performance of the President shapes contemporary political life. This is one of the critical consequences of French hero-worship, so well analyzed in this book. Of course, not all readers will share the little esteem of the author for the political personnel of France's parliamentary Republic between 1945 and 1958, who did not only accomplish the modernization of a rural, backwards society, but also laid the foundations for the process of European integration. However, everybody interested in the modern history of France will greatly benefit from reading this thought-provoking, discerning, and insightful essay.