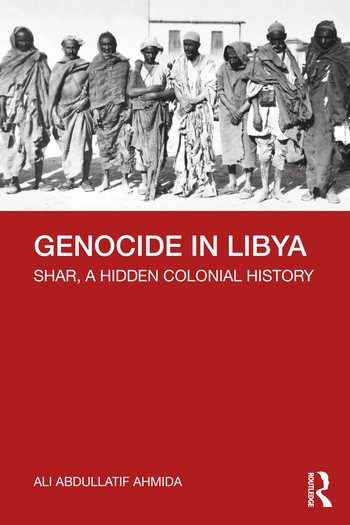 Ali Abdullatif Ahmida’s book Genocide in Libya: Shar, a Hidden Colonial History sets off from a clear premise: Italian armed forces carried out a genocide of Libyans all through the fascist colonial period (1929-1934). The word «genocide» is not thrown around lightly by historians or lawmakers, but Ahmida is adamant about it. Although he details his thesis in a volume that is not perfect, he brings to the table something unique, for which everyone in the field cannot but express gratitude: oral sources, the testimonies of the interned (pp. 77-112). Access to this source alone should give researches pause and compel historians of Italian colonialism to give a second look to the established narrative over Libya.

The author states that Italian actions in Libya fit the definition of genocide: «First, the intentionality of killing and, second, the policy of destroying physical, biological, and cultural patterns of life» (p. 3). Killing the herds of a nomadic people as punishment for disobedience (p. 62), fencing off the desert with barbed wire, requisitioning crops and lands to bring in Italian farmers, carrying out executions (p. 76): according to the author all these elements support the definitive accusation that Italians carried out a genocidal policy, not just a violent repression of anticolonial movements. Moreover, the author openly accuses Italians to have actively covered their brutal past under a complex net of silence, omissions and self-apologetic narratives.

The book’s five chapters are not entirely original, nor of equal writing and research quality: Chapter I lays out the origin of the author’s interest, his field work methodology and his attempts to gauge international public knowledge of the events.

Chapter II presents the densest arguments, which tend to return in later chapters, but it’s very rigid and categorical, flattening the intricacies of the diverse and ever-evolving perspectives of the field of study on Fascist colonialism. The Regime appears to have no depth, no inner workings, made only of apical choices. The controversy of archive access is central: the author does not spare open accusations against Italian archives as accomplices of a coverup, framing their «unwillingness» to open files to historians in a perfect continuation with the lack of epuration of colonial administrators after World War II (p. 52). These accusations seem anachronistic, but the research for this book started in the late 1980s. Equally dated appear to be some of Ahmida’s referenced works: he names del Boca and Rochat as the «two leading Italian historians who broke the official Italian and academic silence on the colonial internment» (pp. 26-27), which dates the whole research framework of this book. Since Del Boca’s seminal work, historical studies regarding Italian colonialism have steadily increased in number and quality, filling the gap of knowledge between the events of Italian colonialism and their mostly removed public memory. The author accuses Italian scholarship of being Italo-centric – which is a correct assessment at times – but also of being apologetic and whitewashing the issue of Italian concentration camps, in so doing ignoring specific studies on Libya[1] and scores of others. Also, the use of novelized movies to gauge Italian self-representation is rather specious at times (p. 54).

Where this book shows its full potential is in Chapter III: here the author frames his long field research work on oral histories into a sociocultural reconstruction of the history of the victims of Italian actions. The author gathered the recollections of the victims of the Italians in Libya: their narratives and cultural constructs around it, introducing us to the concept of Shar, the evil caused by the Italians (p. 77). A narrative that challenges the top-down perspective of a colonial administration and tells the events from a local point of view: detailing the forced marches, the killing of animals, the acts of brutality carried out by the Italians and the inhuman disregard for the life or death of the Libyans in the camps. Even more interesting, Ahmida has gathered the songs and poems (pp. 179-186) stemming from this experience, the cultural framing of this traumatic experience for the survivors. A key source, thus far missing, that the author offers to scholars.

Chapter IV is also a very interesting contribution on the memory of the events, detailing how the memory of the camps was dealt with in Libya and abroad, although over-focusing at times on novelized movies to gauge Italian post-Fascist mentality and the awareness of Italian colonial past and atrocities (p. 116). One of the core theses of this book is also in this chapter: that Italian practices in Libya in the 1930s inspired Germany’s own genocidal polices in the Holocaust, quoting a visit by Herman Göring to the colony as a pivotal moment, within a systematic practice of colonial knowledge transfer between the two axis powers (p. 120, p. 172). This knowledge transfer seems based more on circumstantial inference than documented proof, though.

This volume is not perfect. It is at times repetitive; it mixes media and historical works of different depth without proper critical framework; its bibliography is limited and, at times, outdated. But its conclusions point to a ground-breaking question: How to deal with a forgotten genocide (p. 168)? A very valid question, made even more pressing by the fact that Italian scholarship has objectively evolved in sensibility, acumen and sources from the 1970s, but the issue of the Libyan camps is still on the edge of historical narrative. This book could not be a more appropriate challenge to Italian perceptions of their past and responsibilities: despite some important flaws, it is a masterful example of a destabilizing research which, if properly read and critically framed, can be a great catalyzer for the entire field.