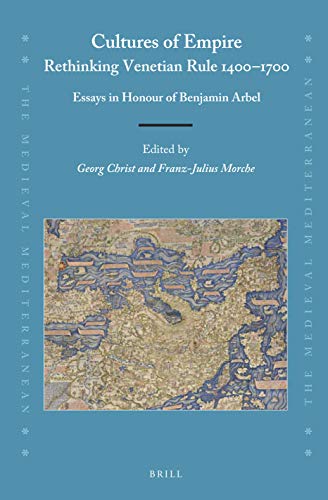 Cultures of Empire comprises a selection of papers presented at a workshop held in honor of the historian Benjamin Arbel in 2015. It offers research on early modern Venetian rule from the perspective of both the ruling elite and their subjects, providing a relational framework structured around ships, merchants, officials, urban life, information, and cultures from the mainland to the Mediterranean.

The first part discusses the building of the Venetian Empire. Monique O'Connell defends the view that Renaissance orations in honor of the doge used the term «empire» ambiguously. In fact, in 1476 the ducal promissione prohibited celebrating the newly elected doge with grandiloquent speeches. The Venetian state undoubtedly feared that its republican polity would be distorted with the advent of the printing press. Deborah Howard demonstrates how the Venetians' particular attachment to their buildings often differed from the «utopian dreams» set out in the architectural treatises. While the categorization of a building as «old» was enough to justify an architectural renovation, the positive meaning of «antique» and «venerable» guaranteed an architectural style that was typically Venetian. Franz-Julius Morche highlights a collection of letters in which Marino Morosini informed his son-in-law in Vicenza of all the events taking place in Venice over a period of almost two years. There is even a detailed account of the battle of Maclodio (1427), suggesting a growing interest in political news among a growing audience.

The second part focuses exclusively on Venetian identity. According to David Jacoby, Venice recognized its citizens, subjects, and naturalized foreigners with vague terminology. Commercial opportunities favored their inclusion in the Venetian social network, which often came into conflict with the authorities of Byzantium, Cilician Armenia, and Cyprus. Raines Dorit states that access to the Venetian patriciate was equally challenging. After losing Crete, many Cretan noble families returned to the lagoon city, claiming equal rights with the Patricians. The Republic once again avoided «adopting a clear policy» (p. 171) because their presence on the island could be significant in the future and complicated their legal legitimacy.

The third part investigates the ways in which the Venetian Empire impacted its subjects' daily life and business. For Marianna Kolyvà and Gerossimos Pagratis, the Siguro and Verghis families took advantage of Venetian rule to promote their political and economic agenda in the sixteenth century. Both families were successful thanks to their connections with Venetian officials, their involvement in trade relations with the Ottoman Empire, and their role as intermediaries between the Serenissima and the Sublime Porte. From a cultural perspective, Tassos Papacostas reinterprets Giandomenico Martoretta's sixteenth-century madrigals as a shared vehicle for the Cypriot aristocracy to mark its social distinction and appreciation of Venetian lifestyle. In contrast, Nicholas S. Davidson highlights the complex religious coexistence in the Stato da Mar, where most of the subjects followed the Orthodox religion. Venice oscillated between papal intransigence and tolerance, in a concerted effort not to lose the loyalty of its Greek subjects.

The fourth part focuses on ports, ships, and men in the Venetian Empire. Reinhold C. Mueller's chapter examines a fifteenth-century device on the castle of San Nicolò in Lido, which served to warn ships entering and leaving the Venetian port. Renard Gluzman, meanwhile, discusses the navi veneziane, which were identified by the flag of Saint Mark and built in the Dogado. The Jewish physicians and surgeons in Crete gave accounts of people's movement into and out of the Venetian Empire. Giacomo Corazzol situates their expansion around the middle of the fourteenth century, thanks to the high level of Catalan immigration that also influenced Jewish medical practices in the fifteenth century.

The fifth part shows how material culture was equally important in shaping the Venetian Empire. Housni Alkhateeh Shehada traces the fourteenth-century trade in gyrfalcons. The birds originated in Iceland and were transported by Hansa merchants before being traded by Venetians in the eastern Mediterranean. The Mamluk court greatly appreciated gyrfalcons; indeed, Venetian diplomats used them to appease their counterparts in Egypt. Nathalie Rothman focuses on the material and diplomatic importance of Venetian gifts in the seventeenth-century Venetian-Ottoman context. Her preliminary research on cash books used to log daily expenses provides evidence of an institutional archive to support the turnover of Venetian baili in Istanbul. Maria Pia Pedani (recently passed away), meanwhile, gives an account of the life of Michiel Membrè, a well-known interpreter in sixteenth-century Venice. Thanks to his language skills that were put to use during the Ottoman missions, he became an important part of Venetian society and was posthumously honored in an altarpiece in the Venetian church of San Felice.

Finally, Cultures of Empire shows that most Venetian subjects were attracted to the cultural trends that were so fashionable in Venice, which emerged as a capital city in its own right. The Venetian economic and institutional networks facilitated the movement of people and goods across the Eastern Mediterranean, providing its most entrepreneurial subjects with global connections. The Patricians in Palazzo Ducale often appeared to respect the local balance of power (primarily political and religious) but jealously guarded the privileges they had achieved in 1297. As a result, conservative tendencies characterized the Venetian Empire, with rulers avoiding its fragmentation and encouraging its rigidity. The example of Venetian-Cretan families serves to illustrate how the empire’s once-admired stability gradually evolved into political stagnation.This book gives an insight into the contradictory, unpredictable, and pragmatic nature of the Venetian Empire, which functioned according to late-medieval logic at a time when other empires had already embraced the modern age.