Nature and the Iron Curtain 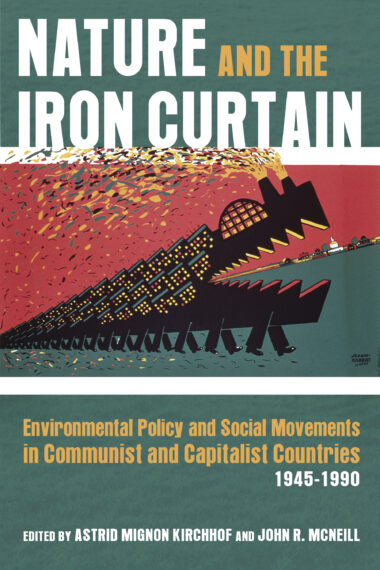 Even if history had «ended» in 1989, historians would still be interested in comparing the environmental records of the capitalist and communist worlds. As questions about political economy have come roaring back in the twenty-first century, the relationship between political systems and environmentalism is increasingly not only of historical interest. The edited volume Nature and the Iron Curtain: Environmental Policy and Social Movements in Communist and Capitalist Countries, 1945-1990 is an important addition to the growing scholarship on the environmental history of the Cold War. According to the editors, Astrid Mignon Kirchhof and John R. McNeill, the goal of the book was to «contribute to current debates about the implications for nature of the two foremost political and economic orders of the twentieth century» (p. 3). The thirteen topical chapters accomplish this through solid original research and a diversity of approaches. Taken together, the research here does not add up to sweeping conclusions. Instead, the editors argue that it is hard to make generalizations about environmental policy on either side of the Wall. More clear seems to be the conclusion that in the case of environmental matters, the Iron Curtain was quite porous. Ideas – like many natural phenomena – did not respect the – sometimes fortified – border between the capitalist west and the communist east. The book serves as a valuable introduction to the topic of environmentalism and environmental policy and its entanglement with political systems in the postwar period.

Nature and the Iron Curtain starts with a useful introduction that brings the reader up to speed on current research on environmentalism and environmental policy in Cold War Europe and the West. In this body of literature, the work of Raymond Dominick has remained influential. Comparing East and West Germany, Dominick found that democracy as practiced in West Germany compelled the state there to respond to citizen concerns more effectively than their counterparts in the East.

The remainder of the volume is divided into three sections. The first and longest, called «Communist and Capital­ist Systems Revisited: A Comparison of Their Environmental Politics», deals with specific «nation-states» (p. 12). It opens with three chapters dealing with the Soviet Union. Laurent Coumel’s article explores the rise of a technocratic environmentalism in the Soviet Union, at least as concerns water issues. It was not Cold War competition, but rapprochement between East and West that opened up possibilities for Soviet experts to implement Western inflected processes. Next, Anolda Cetkauskaite and Simo Laakonen provide a thorough empirical history of water pollution and wastewater treatment technology in the Lithuanian Soviet Republic throughout the Cold War. While Soviet state security suppressed political opposition in Lithuania, the state also paid genuine attention to water pollution and was relatively successful in mitigating it in the Republic’s waters. The top-down approach to pollution contrasts with the experience in western Baltic states and led to generally positive results throughout the USSR. Tetiana Perga’s contribution focuses on the impact of the Chernobyl disaster on Ukraine’s environmental politics. She argues that the accident was the catalyst for an antinuclear environmentalism indignant about the Soviet state’s lack of transparency. This movement achieved considerable momentum and played a major role in discrediting the soviet regime in the eyes of citizens – particularly Ukrainians.

Western Europe takes center stage in the following chapters. Hendrik Ehrhardt looks at the evolution of air pollution laws and electric utilities’ attitudes towards environmental policy and environmentalism in West Germany in the 1970 and 1980s. These companies were one of the most important stakeholders in the issues of clean air, and Hendrik demonstrates that they shifted from ignorance of the problem in the 1950s to incorporating pollution reduction into their corporate self-image by the 1980s. As utilities realized they could not prevent implementation of popular pollution reduction laws, they tried to present their compliance as evidence of green consciousness. In From Anti-Nuke to Ökopax Stephen Milder connects 1970s anti-nuclear reactor activism to the explosion of the peace movement in early-1980s West Germany. The catalyst for this development was the decision – made during one of the peaks of Cold War tension – to station new NATO missiles on West German soil. In the event, grassroots environmental movements familiarized broad swaths of the West German public with the methods of protest and social movements. In so doing, they created an opportunity to eschew traditional Cold War politics. Wilko Graf von Hardenberg shifts the focus to the environmental politics of postwar Italy. His goal is on the one hand to include the environmental dimension of the politics of postwar urban planning and on the other to consider the social conditions of the environmental change caused by Italy’s postwar boom. Hardenberg concludes that the heavy environmental costs of Italy’s economic transformation were caused by Cold War politics, the needs of reconstruction, and the country’s peculiar patronage system.

Closing out the section, Brian James Leech recounts the peculiar episode in which Montana – not widely known for its environmental activism – became one of the staunchest anti-nuclear states prior to the nuclear meltdown at Three Mile Island. Leech suggests that Montana’s statutory requirement that any nuclear facility built in the state be ratified by referendum was the result of antinuclear activists exploiting Cold War fears of safety and regional antiauthoritarianism to launch a successful movement.

Part 2 is entitled «The Porous Iron Curtain» and deals with «cross-border interactions and cooperation in the field of environmental politics (p. 12)». It begins with Eagle Glassheim’s tracing of Czechoslovakia’s expanding and «internationalized» (p. 138) environmental discourse from the 1960s through the 1980s. Glassheim reveals that the Czech state was concerned with the consequences of the country’s reliance on brown coal for much of its energy supply, and that it seriously engaged with a growing international discourse on environmental degradation by the 1970s. While it ultimately failed at environmental protection, the state took effective action to combat degradation with public health measures. In the most explicitly comparative contribution, Julia E. Ault studies environmental activism in neighbors East Germany and Poland in the 1980s. Ault illuminates the reality that the Eastern Bloc was not a monolith. Environmentalism was one of a small number of issues that East Germans managed to rally around. By contrast, broad opposition to the government was much more successful in Poland, but it did not necessarily revolve around environmental issues. In part because of Poland’s relatively greater political freedom, it served as a site where environmental activists from East Germany – and across Eastern Europe – could network and communicate with their counterparts in the West. Hrvoje Petrić offers a first attempt at a full history of environmentalism in Socialist Yugoslavia. He is able to show that while Yugoslavia established its first institutions for the protection of nature immediately after World War II, it was not until the 1970s that an actual environmental movement gradually developed. Initially, environmentalism was expressed through state-sponsored organizations. By the 1980s, groups outside of the government framework began to emerge. After a brief surge in popularity, many environmental organizations went into decline – likely a symptom of the impending dissolution of Yugoslavia in Petrić’s estimation.

Scott Moranda’s chapter reflects on technocratic debates within West Germany about agriculture and its ability to feed the German population. He demonstrates that West Germany’s transition to high-input, high-energy agriculture was not only a result of farmers’ acceptance of these methods but a Cold War consensus between proponents of mechanized and natural farming that specializing in livestock was the country’s natural state of being. The article includes one of the first attempts to analyze the infamous Morgenthau Plan from an environmental history perspective.

The shortest section, Part 3, focuses on «Environmentalism and Détente». Jacob Darwin Hamblin’s history of the short-lived Water for Peace program sheds light on the efforts of the nuclear lobby in the United States to exploit environmental problems for its own gain. Beginning in the mid-1960s, Water for Peace foresaw building nuclear reactors in Israel, Egypt, Jordan, and Syria to power desalinization plants that would solve the region’s political problems by conquering aridity. The abandonment of the project in the late 1960s out of recognition of its technological unfeasibility shows that the nuclear dimension – and not the environmental crisis – was always the critical piece of the entire project from the American perspective. Finally, Astrid Mignon Kirchhof closes the book with a consideration of East Germany’s instrumentalization of environmental diplomacy for its most crucial foreign policy goal. While others have demonstrated that East Germany utilized environmental diplomacy as part of its «West Work» efforts to achieve international recognition of its sovereignty after détente, Kirchhof shows that environmental policy played this role from the inception of the German Democratic Republic onwards.

Most of the chapters in the volume originated in a conference held by the German Historical Institute in Washington, DC. That might in part explain the light German accent that can be detected in the contributions. A total of five chapters have a focus on one of the two postwar German states, with West Germany accounting for three of those. By contrast three chapters deal with a part of the USSR, and two primarily with the United States. The topical chapters are devoted almost completely to states in Europe and North America. Other regions are mentioned only briefly for contextual purposes in the Introduction.

Another fair conclusion is that, despite a surge in environmentalism in the postwar period, concern for nature always and everywhere eventually took a back seat to issues of economics and security. As Eagle Glassheim argues in his contribution on Czechoslovak environmental policy, pollution there was not caused – as suggested by Dominick and others – primarily by a lack of democracy. The regime recognized the existence of environmental disaster and efforts to publicize it were not always censored. Rather, bad outcomes were the result of an «internal balance of interests willing to sacrifice environmental and human health of certain regions for economic growth (p. 150)».

The components of Nature and the Iron Curtain are written in an admirably accessible fashion and can be read by anyone interested in the environmental history of the Cold War and the history of environmentalism in the postwar period in particular. While the peculiarities of the individual contributions make it difficult to impose a clear logic to the volume, taken together they provide an illuminating picture of different approaches to environmentalism in the selected countries and suggest crucial questions that remain to be answered.