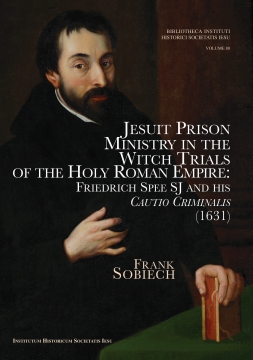 Can we thwart the hegemony of English as the language of scholarly publication? The book under review was originally conceived as the author’s Habilitationsschrift, written in German and presented in 2017 to the Faculty of Catholic Theology of the Julius-Maximilianus-Universität in Würzburg. It should have remained in German. The stilted English translation inconveniences readers who appreciate incisive academic prose. Awkward formulations abound.  At times one can easily infer the original German. Communicating clearly must take priority over capturing a wide market of anglophone readers. German is an established language of scholarly communication. The large and growing scholarly audience for Jesuit history could have benefited from a German monograph.

Friedrich Spee (1591-1635), a Jesuit priest, is best known for challenging the widespread persecution of witches in his book Cautio Criminalis (1631). His opposition was highly controversial in his day, especially within the Society of Jesus. Martin Delrio (1551-1608) published his treatise on witchcraft Disquisitiones magicae in 1599/1600.  Numerous reprints signalled the popularity of the book written by the learned Jesuit.  In a comment about the «insane» belief of wizards in their ability to overpower demons, Adam Contzen (1571-1635), the Jesuit exegete, referred to «our Delrio» (p. 185). Spee, who doubted the diabolism of those, mostly women, accused of witchcraft, parted company, moreover, with many German Jesuits who visited them in prison, assured of their malefice.

At the outset, Frank Sobiech promises a study on the Cautio Criminalis. He aims to show that «Spee’s character, his education and life in the Society, as well as his many contacts, were all brought to bear on his work» in prison ministry. Furthermore, Spee «penetrated – in a legal and theological sense – the procedure of the witch trials». Legal argument prevailed in Spee’s Cautio Criminalis, which at the same time «breathes a strongly pastoral intent, by criticising the rumour-mongering that led to imprisonment, the prisoners’ lack of rights in the criminal proceedings in combination with the ‘witchcraft’ charges, the ‘logic of torture’ that left no way out, the torture based-denunciations of alleged accomplices and what he saw as a misguided prison ministry» (p. 4).

From Sobiech’s Introduction readers expect an arresting analysis of a seventeenth-century text, duly embedded in prison ministry, a ministry that Jesuits had undertaken since the inception of their religious order. Readers will be disappointed. They learn much about Jesuit prison ministry through the unpublished Litterae annuae, provincial reports that «served to promote cohesion within the Society as they were read aloud during meals» (p. 8). The Annuae of the two Rhenish provinces underpin the third and longest part of the book, entitled From the Prison Ministry of the Rhenish Jesuits to the Cautio Criminalis. Spee’s book, however, is a sidelight, not the destination of Sobiech’s analysis of Jesuit prison ministry. He concentrates on the publication of the Cautio Criminalis in Part II, the biography of Spee. In Part IV, Sobiech offers an attentive survey of the reception history of the book within the Society of Jesus from Théophile Raynaud (1583-1663) to a «remark» (p. 362) in a volume, published in 1861, of the Acta Sanctorum, in which Spee functions as a favorable foil to the sainted fifteenth-century Franciscan inquisitor, Giovanni da Capestrano. Karl Rahner’s article on Spee receives an honorable mention. But Sobiech surprisingly does not pause to outline the structure, analyze the rhetoric, or unfold the argumentation of the Cautio Criminalis.

The longest and final chapter of Part II examines «the publication of the Cautio Criminalis and its consequences» (p. 93). Two elements of the story drive the detailed narrative that Sobiech constructs. First, the Lutheran printer, Peter Lucius first published Spee’s book pseudonymously in 1631 in Rinteln, more than 50 kilometers from Paderborn, where Spee taught moral theology. Lucius identified the author as «Theologus Romanus» and «Theologus orthodoxus» (p. 106). By the time of printing, the building of the Lutheran University of Rinteln, for which Lucius was the printer, had come into the possession of Benedictine monks, thanks to the Edict of Restitution (1629) in the Thirty Years War. Lucius printed for the monks. Sobiech speculates that «a member of the Paderborn landed gentry» (p. 128) had supplied Lucius with Spee’s manuscript without Spee’s authorization. Second, a second edition of the Cautio Criminalis, prepared by Spee and published in Cologne in 1632, almost resulted in Spee’s expulsion from the Society of Jesus. His Provincial, Goswin Nickel, a future Superior General, and Muzio Vitelleschi, the current Superior General, knew of Spee’s involvement with the second edition. Sobiech reasonably concludes that for Nickel «Spee’s noble descent» (p. 157) outweighed his disobedience and the potential scandal of the book as he rehearsed for Vitelleschi the reasons for and against expelling Spee. In the end, Spee in 1633 promised closer adherence to the Society’s rules.

For much of Part III references to the text of the Cautio Criminalis function as obiter dicta in association with Jesuit prison ministry. Sobiech’s observation that «Spee stressed that natural science and medicine were subject to advancement» (p. 194) corresponds to Jesuit discussions of the mental illness of witches. He clearly was aware of the criticisms of Caspar Hell, SJ of the witch trials in Eichstätt. Thus Spee «was aware of ongoing events beyond his own province» (p. 202). Sobiech registers his complaint that judges viewed Jesuit confessors «as legal amateurs» (p. 207). He pairs a horrified report by a Jesuit in 1628 of the torture endured by a woman with Spee’s report of the singing of a woman’s pubic hair «by applying a torch» (p. 230). Like Hell, Spee once admired authorities such as Delrio but could no longer trust them «since – as he wrote – virtually every one of their teachings concerning witches is based on no other foundation than fables or confessions exacted through torture» (p. 284). In 1629, three Jesuits from the Theology Faculty at the University of Trier rendered expert opinions for the trial of a farmer for sorcery. Sobiech includes their opinions in an appendix of his book (pp. 431-441). It is not clear why he inserts in his long analysis of the opinions a comment stating that «Spee contrasted the practice of the witch trials in the Empire with that of ‘the Italians and Spaniards’ in his Cautio Criminalis» (p. 287).

In the last chapter of Part III, Sobiech provides glimpses into Spee’s thought world and character as he casts «a glance towards the inner feelings of the prison visitors» (p. 311). He draws on Spee’s devotional Güldenes Tugend-Buch as well as the Cautio Criminalis. Spee’s wonder at creation, his combination of «nature mysticism and logic» (p. 316), his curiosity, his concept of the pastoral responsibilities of priests, and his humanitas emerge from Sobiech’s analysis. However, his revelation of Jesuit prison ministry reflected in the Cautio Criminalis remains grounded in the Annuae.

The main contribution of Sobiech’s book is to associate Spee’s biography with Jesuit prison ministry to those accused of witchcraft. The Annuae, which furnish rich insight into that ministry, serve as Sobiech’s most compelling source, not the Cautio Criminalis. Spee’s important book still requires a thorough analysis beyond its discomfiting effect in his biography and its reception history. The Cautio Criminalis deserves historical investigation as a text more than as a context.