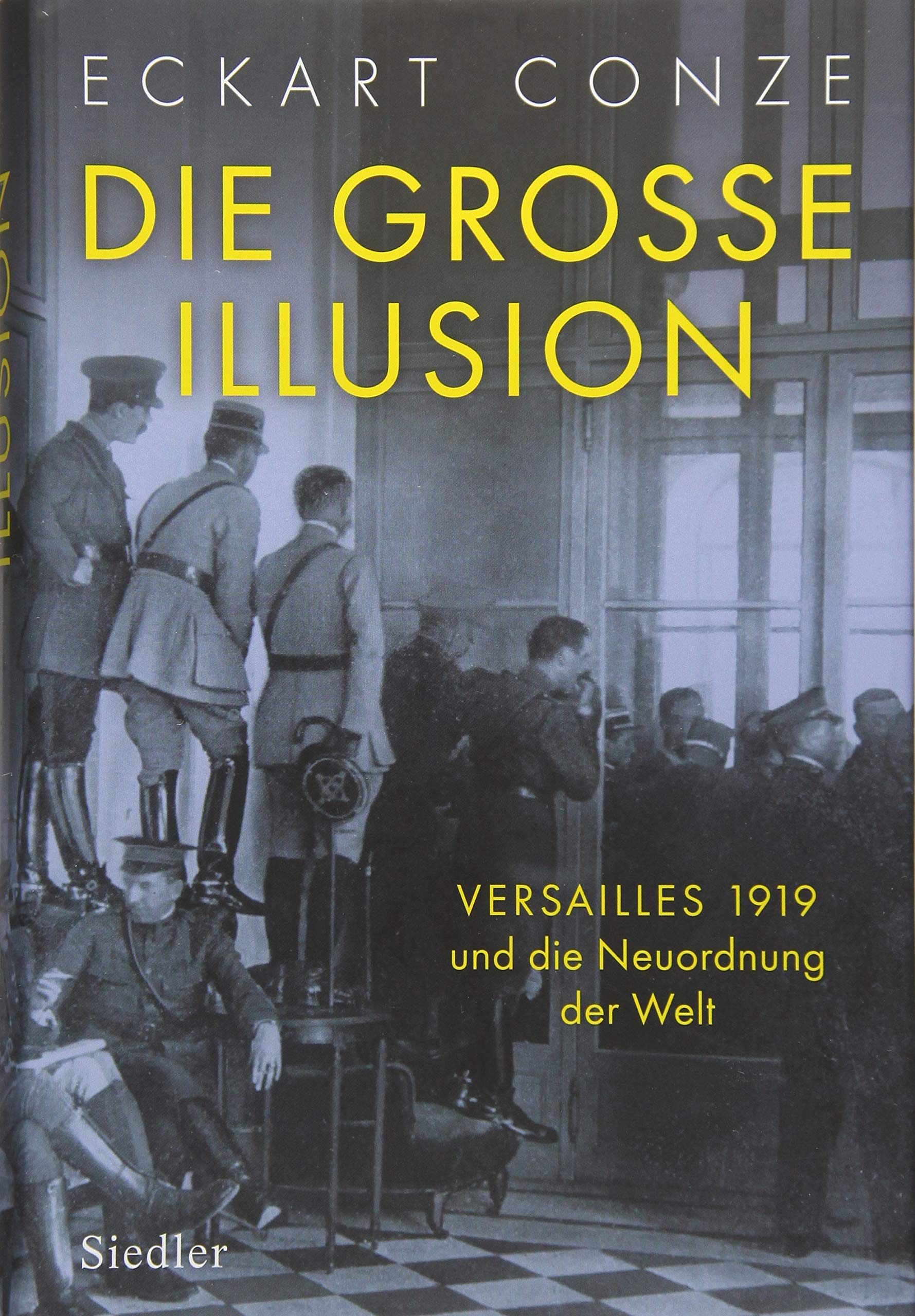 The centenary of World War I brought with it a virtual deluge of new books dealing with almost every conceivable event, process, or aspect of the Great War. Not surprisingly, this surge of interest included the immediate post-war period. In a thick 558-page book about the post-World War I peace treaties, Eckart Conze, Professor of Modern and Contemporary History at the University of Marburg, revisits a topic that has received ample attention ever since World War I ended and the peace treaties were signed in the palaces surrounding Paris. To this vast historiography, the book, published in 2018 and aimed at a wider audience, attempts to add a novel retelling of the story by looking at the events leading to the peace conference from a more global perspective, and by avoiding the determinism that sees the Versailles treaty primarily as the first step towards the rise of Nazism and the outbreak of another World War.

Consequently, the author tries to present these peace treaties primarily as an attempt to end the war, which had only been put on hold with the signing of the armistice with Germany on November 11, and to construct a framework that would prevent a major European war in the future. He puts them in the context of World War I in order to avoid looking at them in hindsight. Thus, he looks at war-time developments to try to explain why the defeated Central Powers were not invited to the negotiating table, why the treaties imposed rather harsh conditions, and why the victorious states employed the so-called «self-determination of peoples» as one of the guiding principles in their reordering of Europe.

The central portion of the book has a three-part structure: in the first four chapters, the author looks at the last three years of the war. He then devotes six chapters to the negotiations and their results, and finally discusses the interwar years in a single chapter. In the first part, Conze persuasively argues that the characteristics of the Paris Peace Conference had a longer pre-history, and that they were a consequence of a brutal and long war that – combined with the political mobilization of the increasingly nationalized masses, which were emotionally invested in the war – precluded a compromise, a peace treaty based on the territorial status quo ante. A victorious peace became increasingly inevitable as the war dragged on – something that was evident by the lackluster reaction to Woodrow Wilson's late 1916 offer to act as an intermediary and help end the war. Not only was Wilson unsuccessful, but the United States entered the war soon after, and the warring sides only became more entrenched in 1917.

Here, Conze points to the increased role of the German High Command (the OHL, Oberste Heeresleitung), to the fact that the Entente started talking about regime change in Germany as a precondition to peace talks, but also – and most importantly – to the Russian revolutions and the military defeat that lead to the signing of the Brest-Litovsk peace treaty. He argues that the draconian treaty that the Central Powers imposed on Russia after its armies had collapsed, and the Germans and Austro-Hungarians occupied most of its Western provinces, had a noticeable impact on the way the peace treaty was concluded after the German defeat in 1918, and on the provisions it included. In a way at least, Brest-Litovsk became a blueprint for Versailles and all the other post-war peace treaties.

Not only that, but at Brest-Litovsk the self-determination of peoples featured prominently; it was employed by the Bolsheviks and the Central Powers. While both were using this concept mostly as a cynical ploy, this was not without consequences, especially as Woodrow Wilson also started to entertain similar ideas soon after. Conze shows how it was not only the Fourteen Points, but also the discussions around the Treaty of Brest-Litovsk and the Bolshevik propaganda which made self-determination so prominent. The so-called «Wilsonian moment» had its prehistory and Conze makes that very clear!

What is almost entirely missing from this discussion, however, is the Habsburg Empire. While the author's focus on Germany and the Bolsheviks is understandable (they were certainly the main protagonists in the East), the picture is incomplete because Austria-Hungary, as well as the Ottoman Empire, are barely mentioned. Yet they were not just the supporting cast; both states had their own agendas, and this should have been a more integral part of Conze's narrative as well as of his analysis.

In the following chapters, which cover the defeat of the Central Powers (something that seemed inconceivable when the treaty of Brest-Litovsk was signed), the armistice, and the peace conference, the author again renders Versailles expertly and in great detail. The ambitions, hopes, and fears of the victorious powers, their disagreements, the initial German optimism and the subsequent disillusionment, as well as the staging of the events are presented and dissected in a persuasive manner. Conze stresses the importance of Woodrow Wilson; he explains how his ideas had shaped the moment, but he also does not overlook that they were often overshadowed by strategic thinking, imperial ambitions, or – not rarely Wilson's own – racism. He does not, however, engage with the larger historiographical debate about the «Wilsonian moment» – its very existence is not something that all historians agree with – in a meaningful manner. Despite that, the intended audience will surely gain a better understanding of these complex events – and Wilson's part in them – from Conze's book.

In line with his ambition of writing a global history of the peace treaties, the author makes an effort to include the non-European dimension of the «Wilsonian moment». Not only Japan, one of the major powers, but also China, Korea, Vietnam, India, and Africa are incorporated in his narrative. They are, however, covered less comprehensively than one would wish, and rather anecdotally. In fact, even all the parts of Europe are not given the same level of attention. Compared to chapters and subchapters focusing on Western and Central Europe, the narrative is significantly less detailed, and the analysis has less depth, for instance when Conze writes about the Balkans. The facts – dates, names, places – are there, but local actors and agendas are mostly absent.

Occasionally, outdated interpretations and even some entrenched stereotypes surface. Thus, Conze emphasizes that it was impossible to construct «ethnically homogenous» states in East Central and Southeast Europe, as if that were only a problem there and not just about everywhere. Such assertations needlessly exoticize the «other Europe», and do not help to explain its history. Conze's depiction of the emergence of Yugoslavia illustrates this even better. According to him, the Yugoslav movement was a consequence of Austro-Hungarian «foreign rule». Yugoslavia was an improbable state, plagued by religious conflict and the consequences of the differing historical development of its constituent nations. Nations are presented as historical and immutable entities, while Yugoslav ethnic and cultural unity had only been postulated and was not real (p. 428).

Furthermore, Serbs only saw a «greater Serbia» in Yugoslavia, and they dominated the state even after World War II, as Josip Broz never really replaced Serb dominance with actual equality of all the republics in the federation. Consequently, the «national hatred that has been bottled-up for decades» was released after the Cold War had ended, and a civil war broke out (pp. 23, 428-430). In this instance, Conze is replicating essentialist and slightly orientalist interpretations of the South Slav state and ignores the more complex and less determinist explanations. For a book that explicitly wants to avoid determinism, this is a noticeable flaw. Similar problems afflict the rest of the chapter about the dissolution of the Habsburg and Ottoman empires; it certainly is the weakest part of the book.

Yet, on the whole, The Great Illusion is a good book; the narrative has good flow, the author tells the story competently and well, and mostly manages to avoid ten-line sentences that seem to be inherent to the German language. He argues his points persuasively and usually supports his arguments with a decent selection of secondary sources. On occasion, though, the inquisitive reader misses a footnote or two; the bibliography could also have been a bit more exhaustive. The book is not a major breakthrough, but that was not even the intention of the author. It is a very readable and largely reliable overview of the major events and processes that led to the conclusion of the post-wear peace treaties. Its main accomplishment is the historical contextualization of the Versailles peace treaty, which – as the author reiterates in the concluding chapter – was not so draconian and vindictive as is often imagined, even if it certainly was harsh. Yet, the rise of Nazism and the subsequent outbreak of World War II were not an unavoidable consequence of Versailles. They should rather be explained by the interwar era developments, and the perception of the peace treaties as eminently unfair was just one of those.