The State in the Forest 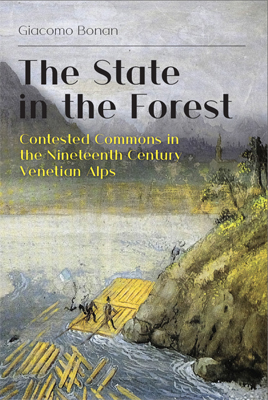 The world that Giacomo Bonan describes in The State in the Forest is familiar to a German historian of the environment, who has studied eighteenth and nineteenth century forestry, and yet new. This is why regional histories of this kind are so fascinating – a well-grounded, long-term reconstruction of lived-in worlds of local communities, but at the same time open for comparison and wider questions about state-formation, and citizenship, about economic transformation and the resilience of socio-economic practices.

At the center of Bonan’s book are the Alpine valleys of the Cadore, a region in the Eastern Italian Alps to the North of Venice and bordering on Alto Adige/South Tirol and Austria. The region came under the rule of the Serenissima of Venice in the early fifteenth century and remained so until its fall in 1797. After the brief but very important period of the Napoleonic Kingdom of Italy, it was part of the Habsburg Empire from 1815 to 1866, when the Veneto was annexed to the new Kingdom of Italy. Since the thirteenth century the families of the Cadore, constituted as the Community of the Cadore, organized the local forests and their exploitation as commons under a system known as regole. Regole initially meant regular decision-making at assemblies by the heads of the households of several Cadore villages, who also appointed officers to enforce regulations of communal life. With the increasing success of Venice as a maritime and commercial power, the forests of the Cadore became of importance to the Venetian economy, as they provided timber for shipbuilding and city extension. Timber entrepreneurs of the Cadore cooperated with Venetian merchants and established a vibrant business that also dominated the income and livelihoods of the local households of the Cadore. Timber trade provided decently paid labor for members of every household and subsidized food imports to the mountain valleys, which did not support much agriculture. It also resulted in considerable population growth before and after 1800. Moreover, it furthered the stratification of local society in wealthy timber entrepreneurs, established families who claimed access to and common ownership of forests, and a class of newcomers and landless without such benefits.

The Napoleonic Age brought fundamental changes to this system – changes, which lasted the better part of the nineteenth century and had the established families of the Cadore look back nostalgically on the seemingly good old times, when the regole system was intact and the timber trade supported communities and households well. The advent of modern forestry in the Napoleonic and Austrian period meant that regional and central administrative officers were tasked with supervising the felling process as well as introducing new cutting and conservation measures. The administrative elite in Venice adopted the new scholarship on forests which emerged out of France and Germany and attempted to implement it on Venetian territory.

The Cadore, however, is an interesting exception to the general trend to abolish and privatize the forest commons in the early nineteenth century. Rather than abolishing the commons, the successive administrations tried to modernize their administration by transferring the management from the regole and villages to larger municipalities and regional forest authorities, and by using the profits from the forest commons for road building and schools, rather than supplementing food import.

The conflict about the commons in the nineteenth century is the center piece of Bonan’s book. In the preceding chapters, he lays out the long history of socio-economic relations between the timber-rich Cadore and the merchant empire of Venice. Next, he sets the scene by detailing the regional history of the Cadore, population growth, and economic development during the nineteenth century. Moreover, Bonan introduces the reader to local practices of and knowledge about timber logging – for instance, the logging according to moon phases (important to achieve durable dry timber) was discounted by the new forest scholars as folklore, but it was regular practice in many timber forests around Europe. And he shows the divergent trajectories of agro-pastoral uses and timber production of the Cadore forests.

In the main chapter, Bonan unfolds the century-long battle about the forest commons of the Cadore. The gradual changes in the legal framework for the Cadore forests, the attempts at reorganizing forest management and redirecting the income from the forest commons resulted in widespread resentment of forest governance among the established families of the Cadore. Many felt disenfranchised and dispossessed of their proper share of the commons. Coated in the nostalgic narrative of returning to the old consensus of the regole the families pursued the partition of the forest commons among the established households, with the intent to gain the say about their management and the profits deriving from them. To this end they reverted to a whole number of resistance practices including open revolt (e.g. during the early 1840’s) and participating in the 1848 revolution on the part of the revolutionary Republic of San Marco, while occupying and logging the forests. More common were clandestine appropriation in cooperation with local forest officials as well as a myriad of petty contraventions of forest law. Bonan provides ample evidence for these activities from the administrative records of the archives of the Veneto. He gives a lively picture of the self-esteem, the resilience and the capacities of political adaptation among the local village elites. Less consideration is given to the rural underclass, migrants and landless, who would not have benefitted from the partition of the commons.

The conflicts lasted from the Napoleonic period until the late 1860s, when timber from the Cadore lost its importance as a key resource. With the onset of industrialization and new railroad lines, other economic sectors gained in importance. Other forest regions were supplying the still growing demand for timber. The Cadore forests, now less exploited for timber, were pressured by the wood consumption of a growing population and by cattle breeding. Bonan ends his study with this short outlook on the beginning of the industrial age in the Cadore. The book, however, would have merited a more extensive summary and conclusion.

Giacomo Bonan’s book presents an intriguing case study on the transformation of forest commons during the formative period of the nineteenth century. The author offers an impressive range of material for comparative studies in the history of European resource governance, of state-formation and of the socio-economic transformation of rural areas before industrialization. It is the first Italian work of this kind available in English and will compare well with existing and future case studies on the transformation of community forests in other European regions. The study is also a comprehensive social and economic history of the Cadore, that is well situated among other parts of the Veneto and explains changes over a long-time-frame and also takes a close look at the local and regional actors. Not least the book teaches us about the resource impact of Venice as a Mediterranean metropole on its immediate hinterland. The work is not an environmental history in the narrower sense, as it side-lines questions about the material, ecological, and silvicultural development of forests. Nor does it try to disentangle the ecological narratives and assumptions of the various historical actors. Giacomo Bonan has written an expertly crafted and inspiring political and social history of forestry and state-making in the formative period of the nineteenth century.