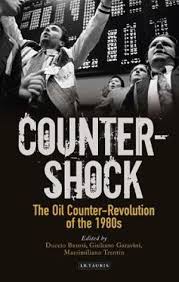 The oil price shocks of 1973 and 1979 have seen an unparalleled revival of historical interest thanks to archival openings and a reinterpretation of the 1970s as a period of renewal and experimentation. This book edited by Duccio Basosi, Giuliano Garavini, and Massimiliano Trentin delves into novel territory by analyzing the impact of the dramatic fall of oil prices after 1985-1986. Taken together, the essays collected in the book demonstrate the impact of this counter-shock in key historical processes, ranging from the collapse of the Soviet Union, to the foreign debt crises in ‘Third World’ countries and to the re-emergence of a consumerist culture in the United States.

The first aim of the authors, underscored by the diversity of their perspectives, is to provincialize the view that this price collapse was a return to normalcy after a supposedly aberrant 1973–1985 period. Indeed, what has been read by contemporaries as well as many historians as an oil shock was an oil revolution and recovery of economic sovereignty in the imaginary of oil-producing countries. This is why, the long-lasting cultural, societal and economic impacts of this counter-shock are analyzed as part of a unified whole for consumer and producer countries alike. From this attempt to provincialize Western-centred interpretations follows the study of a wider set of actors. This allows the authors to achieve their second aim, namely to locate the dynamics of the counter-shock within the “framework of the international political economy of the 1970s and 1980s, with power relations among states, ideas and ideologies, political movements and powerful private actors all playing definite and discernible roles” (p. 4). The use of the word counter-revolution in the subtitle, against the hopes engendered by the oil revolution, allows the authors to connect their analysis of the counter-shock with its roots in the political economy. Finally, their third aim is to analyze the meaning and usage of ‘market’, a term which has dominated our understanding of the period. Several chapters are indeed devoted to show how the language of the ‘free market’ was often used to hide deliberate choices made by many of the actors investigated.

The book emerges from a 2015 conference in held Venice and it consists of five parts, organized around thematic and national perspectives. The first part examines the political and financial roots of the transformation of the oil market that curtailed OPEC’s capacity to determine prices. The chapter by Giovanni Favero and Angela Faloppa analyzes the shift of the pricing system from being determined by oligopolistic agreements among oil companies to a posted OPEC price until, eventually, another regime change leading to the spot prices still in place today. In the following chapter, David E. Spiro focuses on the consequences of the privileged position of the dollar as the oil-pricing currency. This position could be exploited by the US, shrouded under a justificatory market discourse, as when “government-to-government channels” were open to sell Treasury obligations to the Saudis, thus recycling petrodollars in the US, while publicly maintaining that the “markets were working” (pp. 48-49). The interesting essay by Catherine R. Schenk concludes that the trial and error innovations that brought about the oil market financialization were supply-driven, i.e. they were led by the New York and London exchanges attempt to increase opportunities for themselves. Francesco Petrini analyzes the oil majors’ role in the counter-shock. He argues that they defended spot markets prices as part of a wider shift towards diminished companies’ responsibility regarding consumers and producers.

Using new archival evidence, the following three parts focus on the policies enacted by various countries, as well as on the effects on their societies due to the transformation of the oil market. First three crucial OPEC producers — Saudi Arabia, Iran, and Iraq — are examined by Majid Al-Moneef, Claudia Castiglioni, and Ibrahim Al-Marashi respectively. The price war waged by Saudi Arabia for market share, the Iran-Iraq war and the fraught relationships between Teheran and Baghdad with Riyadh are identified as the main drivers of the collapse of the ability of OPEC to determine oil prices. The following part analyzes non-OPEC producers. The internal contradictions of Mexico and the USSR were exposed by the price collapse according to Juan Carlos Boué’s and Olga Skorokhodova’s chapters. Einar Lie and Dag Harald Claes show the significant change of Norway’s political economy because of the counter-shock. Martin Chick brings to light the deep impact of the Thatcher government tilt away from previous governments attempts to avoid depleting North Sea oil reserves. Part four focuses on the consumers. Henning Türk highlights the partially successful attempts of the IEA to diversify energy sources, which played an important role in bringing about the countershock. The last two chapters focus on the US. Victor McFarland analyzes of the U-turn in energy policy in the wake of the advent of Reagan’s free market ideology. The shying away from government intervention led to increases in oil imports which, in turn, led to the expansion of the US involvement in the Middle East. In a most fascinating chapter, Elisabetta Bini weaves together Reagan’s policies and rhetoric and the price collapse with the rise of the New Right and “a new form of conspicuous consumption,” embodying an idea of “radically individualistic citizenship” (p. 292).

The final part deals with the seesawing fortunes of non-fossil fuels. Angela Santese underlines the difficulties of nuclear energy due to concerns about environmental hazards, safety, and potential military use of the technology. These concerns were compounded by an already declining demand for energy, making it less urgent to develop nuclear power. Still, as the following chapter by Duncan Connors and Eshref Trushin shows, nuclear policy diverged wildly among countries depending on various factors, from technical choices in reactor design to the relationship with the oil market. The last chapter by Basosi analyzes the development of a debate on the future of energy where renewables were not yet seen as a viable alternative. Technological development in the field and greenhouse emission risks evaluations were not yet capable of prodding governments to action.

The book is a most welcome addition because it offers a multi-layered analysis of the counter-revolution. It is necessary to underline the interpretation of the ‘market’ is not entirely consistent as claimed in the introduction. Two examples. Favero and Faloppa notice how the “massive flow of non-OPEC oil supply” made “the task of administering prices even more difficult” (p. 30). In other words, technological development and higher prices had market effects in so far as they encouraged research of alternative energy sources, thus making OPEC control over prices difficult. Second, the price war by Saudi Arabia is explained in Al-Moneef’s chapter as a consequence of “structural” changes which made “the fixed price regime inappropriate in the face of a diversified supply” (p. 104). The value of this book comes from the variety of perspectives more than from the attempt to offer a unified interpretation of how to understand the term ‘market’. This book is a necessary stepping stone for further research on field which will flourish in the coming years.