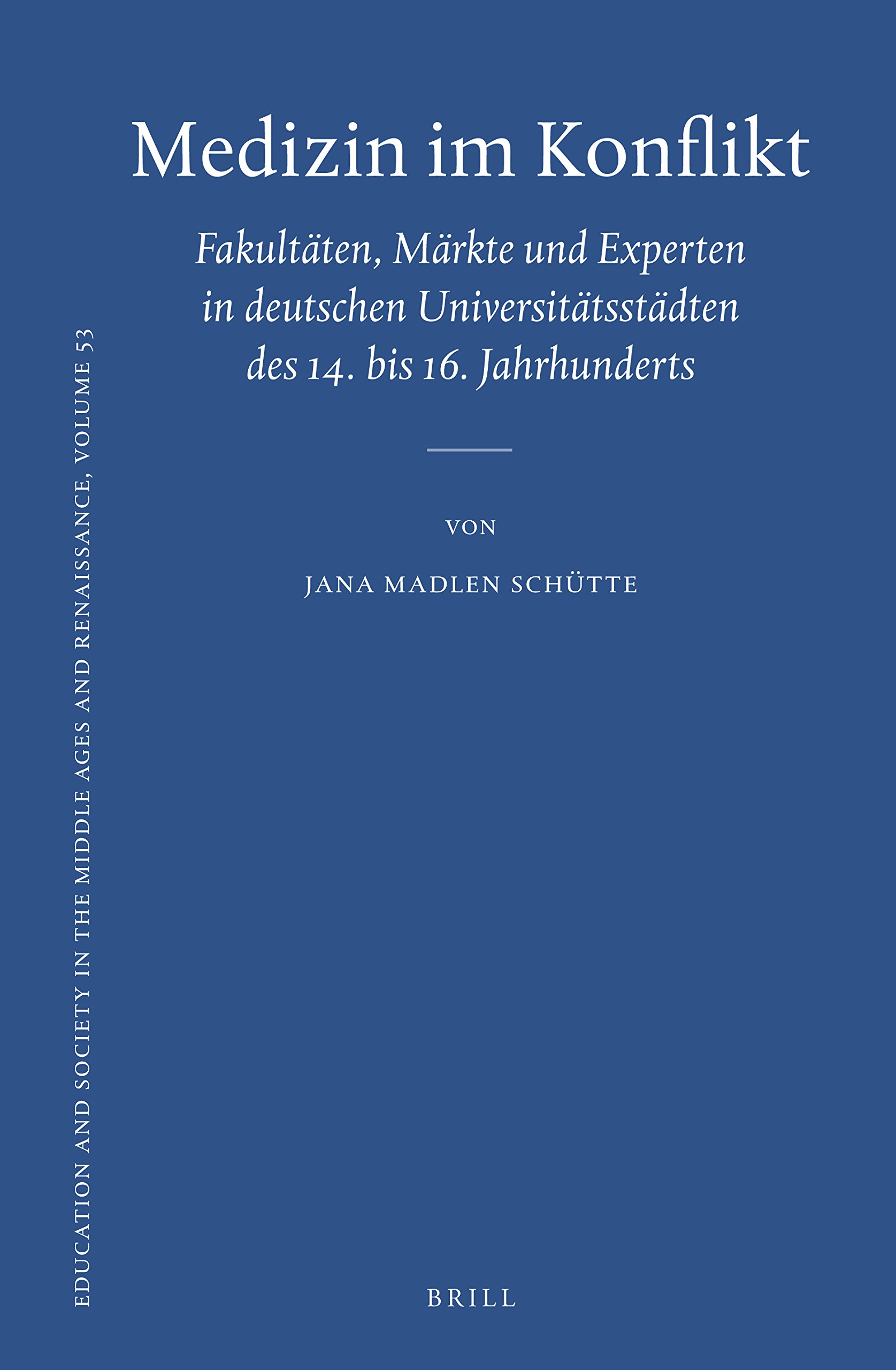 In her Medizin im Konflikt, Jana Madlen Schütte analyses the various conflict situations connected with the process of socio-cultural, professional, and institutional establishment of academic physicians in German-speaking territories from the fourteenth to the sixteenth century. Universitätsmediziner, i.e. those who obtained the qualification of Doctor in Medicine at university, operated mainly in big cities, at court, or in ecclesiastical centres. They were thought to be able to give general advice for people to keep healthy as well as lifestyle and diet recommendations suitable for each patient, in order to treat internal diseases of the body (innere Krankheiten).

The author highlights both the triggering factors and the deep-rooted reasons for the potential conflicts involving Universitätsmediziner, which took place in two contexts: the academic environment and the medical market. In fact, on the one hand, graduate physicians had to establish their position before the other faculties, jurists in the first place. On the other, they had to compete with the wide offer of the medical market, which was full of practitioners without a degree who based their knowledge on practical skills and experience (handwerklich ausgebildete Heiler). Furthermore, academic physicians could be targeted by the accusations of patients disappointed by unsuccessful therapies or wrong diagnoses.

Conflicts occurring in the academic field depended on the state of institutional insecurity in which the faculties of Medicine in German-speaking territories had been right from their foundation. The author focuses her research on the faculties of Medicine of Vienna, Cologne, and Leipzig founded between 1365 and 1409. Medicine faculties were smaller, had less students, graduates, and professors and less financial resources than the faculties of Theology and Law, to the detriment of the teacher’s salaries and equipment. This situation of inferiority led academic physicians to constantly try to institutionalize their knowledge and secure a leading position in the hierarchy of the faculties. In fact, they believed that medicine deserved a higher rank than the one that was given to the artes mechanicae and could claim the status of scientia founded on reason, which made it fully worthy of being taught at university. Furthermore, academic physicians claimed that they could rely not only on theoretical knowledge but also on practical skills oriented towards therapeutic action, for the benefit of the entire humanity. In the late Middle Ages, a rank conflict took place between the faculty of Medicine and the faculty of Law in Vienna, with the aim to establish whether one of the two was more worthy than the other. On that occasion, physicians emphasized their authority, with arguments such as the importance of their discipline and its institutional incorporation into university.

The socio-cultural capital acquired at university in order to face the hostility of jurists was later used by graduate physicians to prevail over the other figures of the health market and to gain their patients’ trust. Due to their academic qualification and its ensuing prestige, to their knowledge, and the establishment of their authority during academic conflicts, academic physicians were able to enter the health market as an exclusive élite of Medizinexperten and demanded public recognition for this status.

In order to distinguish themselves from the other actors within the medical market, Universitätsmediziner, considered as a collectivity and represented by the faculty of Medicine, implemented various strategies of Selbstinszenierung. Selbstinszenierung, a conscious and active process of “self-fashioning”, was aimed at fashioning the identity of Universitätsärzte in their capacity as learned and trustworthy physicians. Those strategies were based on learning as well as on appearance. In fact, on the one hand, academic physicians claimed the superiority of their discipline and highlighted its theoretical basis, invoking recognised authorities (ancient physicians and contemporary academic professors), using a specialized language, and emphasizing their role of commentators in university disputationes. On the other hand, they distinguished themselves from the other health professionals by displaying peculiar signs: the title of Doctor in Medicine (chosen as the criterion for acquiring the status of Medizinexperte), their clothing (a long cloak), their retinue (orderlies and interns), and their prestigious diagnostic methods, such as urinoscopy and pulse taking. The Selbstpräsentation process was closely connected with the strategy based on group cohesion: the access to the faculty of Medicine and to the medical knowledge it passed down was limited and ritualised, and the faculty presented itself to the outside world as an undisputed medical authority.

Furthermore, in order to take control of the health market, academic physicians tried to professionally discredit the other actors operating in this field by stigmatising barbers and surgeons, who had no university training, labelling them as mere “empirics”. At the time, empirics were considered to practise an ars mechanica and dealt with ailments which were external to the body: they treated bone fractures and sprains, carried out scarifications and amputations, closed wounds and performed bloodletting. The burden of treatment bore most heavily on empirics, who were consulted by all strata of the population. Barbers and surgeons from German towns were part of a professional association similar to the faculty of Medicine, both in terms of the high degree of internal organisation and of the legitimation strategies and rituals adopted.

In order to relegate the other actors of the market to an inferior rank, academic physicians also called for institutional action. This is what happened in Vienna at the end of 1453, when a group of academic physicians, feeling that their sphere of influence was threatened by a Jewish practitioner, appealed to the Council of the city faculty of Medicine. During the sixteenth century, when anatomy became a leading sector of medical knowledge, Universitätsärzte started using a different strategy to distinguish themselves from their competitors: anatomical dissections. These procedures went beyond their educational function and were considered by academic physicians as a form of self-legitimation. Anatomical demonstrationes, carried out in front of the town public as part of a solemn ceremony with the highest dignitaries, were used by Universitätsmediziner to highlight the superiority of their medical doctrine and practice, to show the universal usefulness of their skills and to celebrate the academic community.

Despite the wide offer of the medical market, which also included pharmacists, midwives, and itinerant physicians, no solution could guarantee the therapies’ success. For this reason, the physicians’ rank in the market space and the recognition of their authority by competitors and patients was based not only on the quality of the service they offered (a therapeutic remedy, a medical consilium), but also on their social capital (honor and prestige, number and type of patients and social networks). Similarly, the value of therapies did not only depend on their price and quality but also on the status of the physician that was offering them. These dynamics allowed patients to believe, despite being aware of the risks they were taking by accepting the offer, that they could benefit from an exchange, in the hope that they could be cured.

Therapeutic failures, however, affected the patient’s trust in a learned physician, thereby leading to the failure of the exchange and turning trust into scepticism. At that point, academic physicians had to be able to confute the accusations made against them. Patients’ critics against academic physicians were based on various topoi of Medieval Ärztekritik, such as the use of an incomprehensible language or the fact that they were oriented only towards the scholastic tradition and disregarded medical practice. The most frequent accusation, however, was a moral one, and had to do with their greed. Academic physicians were accused of adopting stratagems to extort money because, on the one side, they refused to treat patients who could not afford it and, on the other, patients believed there was a discrepancy between the fees they were charged and the success of the therapies they underwent.

Jana Madlen Schütte’s investigation, supported by a great amount of archival sources, was developed in the wake of the new orientations in the history of medicine, which take into account the patients’ point of view – like the ones by Michael Foucault, Michael Stolberg, Robert Jütte, and Roy Porter. Her work has the merit of questioning research conducted exclusively from the point of view of learned physicians and of effectively going beyond the naive theory according to which academic physicians have gradually led to the scientisation and progress of medicine at university level. Rather, academic physicians are described as a small portion of the medical offer, competing with the other actors on the market for winning paying patients.