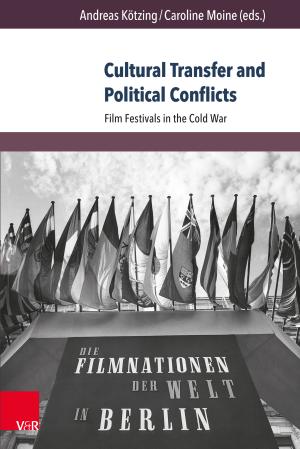 As an academic field, film festival studies emerged with a focus on the contemporary festival scene. Since Marijke de Valck’s pioneering 2008 overview, film festival scholars have used archival research and historical methodologies sparingly or not at all.[1] Cultural Transfer and Political Conflicts provides a model of historical research for the field. This edited volume grounds film festival studies in a rich historical context and establishes film festivals as key sites for cultural diplomacy in Cold War history. Edited by Caroline Moine and Andreas Kötzing, this collection came out of an international conference in Leipzig in May 2014 that focused on festivals in Eastern and Western Europe.[2] The chapters narrate the history of lesser known festivals, examining them in the context of Cold War international relations.

The book is organized into three sections: “Festivals as Crossroads Between West, East, and South?”; “New Protagonists in Film Festival Politics”; and “Festivals as a Stage for National and Transnational Politics,” preceded by an introduction, by Moine and Kötzing, on the history of film festivals since the first Venice festival in 1932 to the end of the Cold War.

Overall, Yugoslavian and German festivals get the most attention. Andreas Kötzing analyzes the rivalry and cooperation between the leftist Oberhausen Short Film Festival in West Germany and the state-controlled Leipzig Festival of Documentary and Short Films in DDR. Tobias Ebbrecht-Hartmann shows how East German film schools trained an international cadre of filmmakers and showcased their films at Leipzig, Oberhausen, and various socialist bloc festivals. Dunja Jelenković examines how Yugoslavian dissident “black wave” filmmakers navigated state censorship at domestic festivals and at Oberhausen. And Dragan Batanče analyzes foreign filmmakers’ activities at the Belgrade International Film Festival. All four authors show how the ebb and flow of state censorship depended on geopolitical context. Ultimately, the state could not prevent personal interactions at these festivals.

Two major festivals, Locarno and Venice, come under examination from new methodological angles. Using police records, John Waffler’s chapter on Locarno shows the deep involvement on the Swiss federal police in the festival throughout its history. Radical activists prevailed at some festival events, and state censorship or diplomatic clashes dominated others. Stefano Pisu analyzes the 1977 Venice Biennale that happened while the Mostra, the main Venice film festival, went on hiatus in the 1970s. Pisu shows the contradictions in perceptions of dissent in Western Europe and the Soviet Union, revealing a range ideas about political activism, and the place of cinema in it. He calls for analyzing “festivals as places where Cold War politics, transnational movements, and the dynamics of domestic politics intersected and came into conflict” (139).

The book makes available in English the point of view of scholars who have published in other languages: Moine in French, on the Leipzig film festival; Kötzing in German, on Oberhausen and Leipzig; Pisu in Italian, on European film festivals.[3] Of these, only Moine’s book has recently been translated into English.[4] Copious multilingual citations demonstrate that film festival history requires multinational archival research, language training, and collaborative work.

In particular, multilingual research helps to uncover the history of unofficial contacts at festivals. Regina Câmara’s chapter describes how Brazilian cinema novo filmmakers navigated European festivals, emphasizing support from Italian festivals and French critics. The circulation of Brazilian films in Europe depended not just on relationships between nations but also on personal connections, as when a Brazilian ambassador or a UNESCO diplomat informally promoted circulation of films by relatives or friends. This and other chapters in the volume show how much personal encounters in Pesaro, Leipzig, or Belgrade mattered when participants went on to other festivals.

The articles do not add up to a complete panorama of Cold War festivals—that would require a much longer volume—but they give an excellent view on directions for future historical studies and methods required to conduct them.