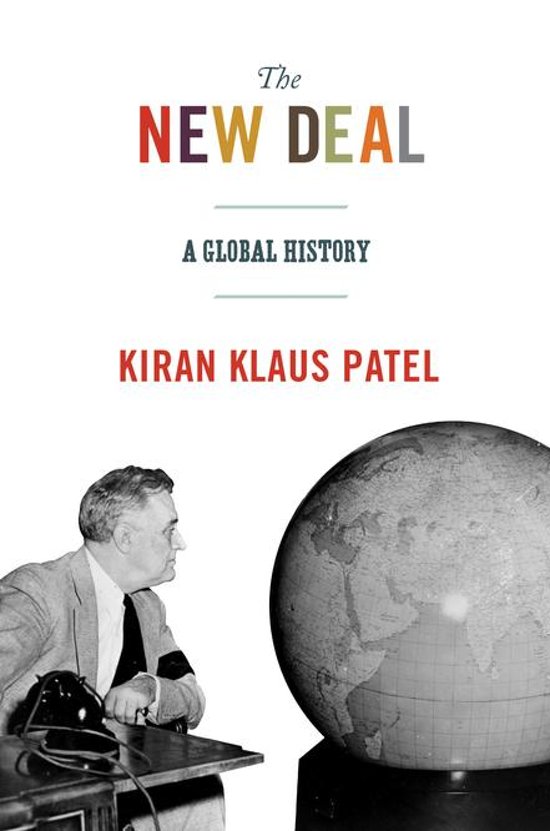 Standard historical accounts treat the New Deal as a national American response to the Great Depression. During a decade when globalization hit rock bottom, US-President Franklin D. Roosevelt gave priority to domestic recovery over international cooperation, while isolationists in Congress passed a streak of neutrality laws designed to forestall involvement in another world war. In his impressive global history of the New Deal, Kiran Klaus Patel demonstrates that this view is incomplete and often misleading because “the New Deal was but a distinct, national variation within a larger pattern, and its domestic and foreign dimensions were powerfully linked” (pp. 1-2). Like most global historians, the author defines his approach as a combination of comparative history and the search for transnational interconnections (pp. 7-8). But while the New Deal has been frequently analyzed in a transatlantic framework, Patel aims at placing it in a truly global perspective that also includes the Soviet Union and the non-European world at large. Furthermore, his time frame encompasses the period from the end of the Great War to the post-World War II decades, tracing the New Deal’s origins and legacies over nearly half-a-century.

This is a tall order but readers may be reassured that Patel succeeded in producing a grand synthesis that is elegantly written, conceptually sound and simply stunning in its empirical and geographical scope but prudently refrains from making inflated revisionist claims. For starters, the author does not deny that New Dealers sought to “insulate” – a term Patel prefers over the customary shibboleth “isolationism” (p. 2) – America from threatening global forces. Instead he argues that economic nationalism, state intervention, faith in planning, national welfare state building, and charismatic political rule were global trends and developed interdependently. In his comparisons, which include Asian and Latin American countries as well as Europe, the author focuses on general patterns and parallels rather than on national distinctiveness. Moreover, according to Patel, the New Deal and its counterparts in other parts of the world should not be viewed merely as responses to a devastating economic crisis but as attempts to modernize societies. To be sure, in stressing commonalities across political regimes, the author carefully distinguishes the New Deal from fascist and communist varieties of statism. Yet he also reminds readers that prior to World War II dictatorship was still a vague concept associated with extraordinary powers that might be legitimately employed in time of grave crisis (p. 49). Roosevelt himself admitted that his approaches sometimes resembled “’things being done in Russia and… under Hitler in Germany’” (p. 117). But obviously the New Deal and FDR’s charismatic leadership style were aimed at preserving liberal democracy (p. 111), and, in contrast to the Soviet Union and Nazi Germany, the New Deal remained distinctly civilian until the late 1930s (pp. 259-260).

Patel treats the transnational dimensions of his story with a keen sense of the limits of the international transfers. In an age of intense nationalism, he points out, adapting foreign models was usually done quietly because [f]ew politicians around the world boasted of having learned something elsewhere” (p. 8). In the face of attacks that the New Deal was socialist, fascist, and plainly un-American, FDR and his associates had every reason to present their policies as deeply rooted in American traditions (p. 120). When New Dealers hoped to find foreign inspiration, they only looked to Europe and never considered the possibility that they could learn anything meaningful from Asians or Latin Americans. Vice versa, the New Deal was not the towering model of reform eagerly emulated around the globe. As a welfare state, America was widely viewed as a laggard in need of catching up with more “advanced” countries, such as Sweden, which, ironically, US attention helped to put on the map as social model (pp. 228-229). By meticulously calibrating the scope and confines of transnational exchange, Patel reconstructs a vast range of dense international discourses about currency management, immigration, social security systems, public housing, urban planning, rural resettlement, social engineering, dam building, law enforcement, eugenics, etc., which will help specialists to put their respective fields into a broader perspective. In contrast, historians who focus on cultural transfers will perhaps find that the book pays only scant attention to that dimension of the global New Deal (pp. 181-184).

In his prologue, Kiran Patel devises an interpretative framework based on three key arguments (pp. 3-5): First, the United States was the only power which could have stopped the downturn of globalization in the 1930s but failed to accept a global leadership role; second, viewed from a comparative perspective, the New Deal took a middle ground between laissez-faire and state interventionism, thus demonstrating that democracy and capitalism could be reconciled; and finally, the New Deal, although a nation-centered program at the time, nevertheless laid the foundations for America’s future global hegemony. All of these claims are sound and supported by persuasive evidence but, of course, they are not entirely new. This book is convincing not because it radically alters but because it immensely enlarges our understanding of the New Deal, “[a]s a distinctive phase in US history, [which] shared more with processes in other parts of the world than is normally recognized” (p. 300). By skillfully combining comparative and transnational perspectives, Kiran Patel gives us a model of how global history should be written.