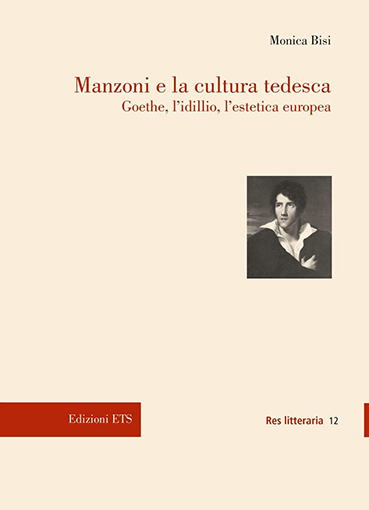 In this volume, Monica Bini reflects on a crucial moment in the relationship between the Italian and German cultures during and immediately following the years of Romanticism, through the lens of the work of Alessandro Manzoni, a Lombard writer important for his central role in Italian literature and cultural history of the 1800s.

The first part of the study discusses the relationship between Manzoni and Goethe, mainly from the perspective of Manzoni. An interest in the relationship between Manzoni and German culture, and specifically between Manzoni and Goethe, is nothing new, as demonstrated by the substantial reference bibliography to Bini’s study. In this case, contact with Goethe is used as an opportunity to reflect on the relationship between Manzoni and wider German culture (Friedrich Schiller, August Wilhelm Schlegel, Wilhelm von Humboldt). The book’s aim is not to relate all the examples of interaction between Manzoni and the German world, but rather to establish how certain favored conceptual groupings circulated from Enlightenment France to the Germany of Kant and idealism, before returning to early 1800s France, subsequently arriving in Italy through the “Conciliatore” journal and Manzoni himself (p. 15). The question to answer is whether Manzoni entered into direct contact with the German sources, or whether a French mediation always has to be assumed. The discussion also goes into the minor details, to check (and demonstrate) Manzoni’s knowledge of German and of Goethe’s works in the original language. It is known that Manzoni read German, but Bini backdates his contact with the language of Goethe to as early as the end of the 1810s, sustaining for example that Manzoni had read the original version of Wilhelm Tell by Schiller when he quoted it in the Traccia del Discorso sulla Moralità delle Opere Drammatiche (1817). Manzoni quite likely already knew how to read German around 1807-1810, when Jens Immanuel Baggesen invited him to translate the Parthenaïs.

Deciding whether or not Manzoni knew German is not an irrelevant detail. There is the underlying question as to when and how Manzoni acquired and matured his theoretical aesthetic stance (p. 35) and how much Manzoni’s theater and prose were influenced not only by the theater of Schiller, but also that of Goethe, in particular Egmont. The second chapter is dedicated specifically to an analysis of the parallels between Egmont and Conte di Carmagnola, and a direct knowledge of Goethe’s text is deemed to be probable. While the influence of Charles Claude Fauriel and French theory is acknowledged as fundamental for Manzoni’s aesthetic conception, the influence of German culture does not appear to be less significant. Indeed, by backdating his knowledge of German it is possible to bypass the assumed totality and exclusiveness of French mediation.

The second part is also divided into two chapters dedicated to the idyll, a widespread genre in European culture. Bini considers this genre in its concrete expressions (from Baggesen in the Parthenaïs to Goethe in Hermann und Dorothea), but she also adopts it as a theoretical interpretative key, proposing it as one of the fundamental themes in the discussion of beauty, a point of entry for understanding a much vaster and more profound aspect of history than just the Italian-German relationship (p. 74). On a more speculative level, Manzoni’s reflections on the idyll in Materiali estetici are compared and contrasted with the Réflexions of Fauriel, and Schiller’s essay Über naïve und sentimentalische Dichtung, while the digression into love of Fermo e Lucia is considered alongside Schlegel’s review of Hermann und Dorothea. As regards prose, the characters of the Promessi sposi are compared with those of Hermann und Dorothea, and certain idyllic aspects (or allusions to the tradition of the idyll) in the novel are compared with the Parthenaïs by Baggesen in the translation of Fauriel.

The idyll thus represents a crossroads of aesthetic theories and literary practices of particular interest for reflecting on European literature. The importance of the genre in the cultural perception of the time is testified for example by the success of the translations of the Idyllen of Salomon Gessner, genuine longsellers that persisted over almost all of the nineteenth century. However, the critical attention that the genre has attracted has been mainly indirect, due to the importance of the concept in the two poles of literary culture in the early 1800s in Italy. On one hand, in the interpretation of the Promessi sposi (Manzoni planned an idyll, the Vaccina, writing only few verses, but his reflection on the genre was fundamental for the elaboration of the novel). On the other hand, the presence of idylls in the work of Leopardi. On a strictly literary level, the reading that goes beyond the anti-idyllic interpretation of the novel is of interest (p. 140), and a comparison with Hermann und Dorothea reveals certain analogies with I promessi sposi, probably noticed by well educated readers at the beginning of the 1800s, who could read this short poem translated into French prose by Paul Jérémie Bitaubé (1800), well known also to Manzoni, alongside the German original in verse. The influence of Goethe is thus much more incisive than might have been imagined.

It is clear that a more comprehensive assessment must take a transnational perspective into account, and probably also trans-disciplinary or trans-medial, including the figurative arts, or philosophy as Bini does. It was in fact the aesthetic reflections of Schiller and Fauriel that provided Manzoni’s inspiration when discussing the ties between sentiment, thought, and imagination, or when writing about happiness in relation to past and future, and its potential fallacy (pp. 119 ff.): “Manzoni knew vey well, if not the essay by Schiller, then certainly the Réflexions” of Fauriel which were based on Schiller (p. 121).

The discussion of the idyll is thus not limited to literary debate, but involves issues of wider significance on a philosophical level and within the history of culture. These include the relationship between nature and morality, between the individual and society (p. 112, already raised by Schiller in the essay Über naive und sentimentalische Dichtung), between inclinations and laws, between what is and ought to be, and more in general between nature, art, and ideals (p. 113-114). Equally significant are the points of autonomy and detachment. Manzoni does not slavishly follow either received opinion or his own role models, but instead demonstrates his critical distance from certain concepts, like the object of poetry, happiness, and in particular the conception of the ideal (pp. 120-121). For example, the possibility of achieving, if not happiness, at least “tranquillity” in this life, but only through the action of the supernatural principles revealed in the Gospel, is a proposition in which Manzoni distances himself significantly from Gessner, as well as from Schiller (p. 130) and Fauriel, instead appearing closer to other possible sources like Louis Bourdaloue and Antonio Rosmini. In this respect, the discussion raises the interesting prospect of further cross-connected relationships with Rosmini, whom Manzoni was in contact with, for the conception of the idyll and beauty.

As regards methodology, Bini looks for affinities in linguistics, images, and themes (in some cases by agreement, in others divergence) between Manzoni and the German sources. The demonstration works thanks to the huge number of connections identified: while individually each piece of evidence is little more than a trace and a direct relationship with the source can not always be recognized, overall the traces support each other and it effectively appears difficult to deny a penetration of ideas and arguments matured in the German sphere, even if in many cases with French mediation, most of all of Fauriel (as the author notes herself, “If it is not possible to attest with ‘positive’ certainty … direct communication between Manzoni and German philosophy, the abundance of parallels … in any case testifies to the wideness of circulation of certain aesthetic ideas regarding the role of the poet and the nature of poetry”, p. 138).

The hypothesis that Manzoni could already read German as early as about 1810 is very persuasive. The analysis of the idyll in the comparison with Schiller (and Fauriel) is highly articulated. Plausible but perhaps a bit more indirectly proven is the reconstruction of a textual correspondence with Goethe’s theatrical Egmont (Bini calls this a hypothesis, pp. 38-39), but deciding whether a source is direct or not, in all allusive art, is always a choice that depends on the sensitivity of the interpreter. Even if it is not certain that Goethe’s tragedy exercised a direct influence on Carmagnola, it is nevertheless plausible, as Bini sustains, that Manzoni had already read the German text before the French translation.

Reconstructing Manzoni’s German culture helps to define some of his aesthetic positions, and more in general illuminates certain aspects of the history of the contemporary culture. Certain key themes were expressed both in Schlegel’s review of the Goethian idyll, and in Manzoni’s aesthetic reflections:

– The meaning of history and the relationship between individual and history: the relationship between passions and history in literary representation is a crucial theme in Manzoni’s theatre and in the Promessi sposi (but also in the Storia della colonna infame). The individual histories (pp. 84-85) become central against the backdrop of the nineteenth-century advent of the concept of individuality. French ideas (Rousseau) played a leading role in this change in perspective on history, but Goethe and German culture were fundamental co-protagonists.

– The idea of love (p. 84): the change in the idea of love is a component of the cultural history of the sentiments, passing through a moment of transition in the early 1800s towards the bourgeois conception. A comparison of the positions adopted by Goethe and Manzoni, even on a theoretical level, in the expression of sentiment in their works appears particularly interesting from the perspective of a comparative European analysis.

– The idea of reader, the relationship of author with the public (p. 62), the relationship between the reader and the passions (p. 81): reflection on the foreseen mediatic response to the publication of a novel was a surprisingly modern issue. Among the possibilities for further study, it might be asked whether the reflections on the figure and role of the reader are indicative of an equal interest in the function of novels themselves (not only of the Promessi sposi) and their mediatic presence in the social context.

As has been seen, the relationship between Manzoni and German culture touches on some important intersections in the culture of the 1800s. The value of a study dealing with leading protagonists, who were capable of irradiating new ideas, thus lies in the ability to identify the often hidden threads that link Italian thought (in this case Manzoni) with much wider experiences than might appear at first sight.