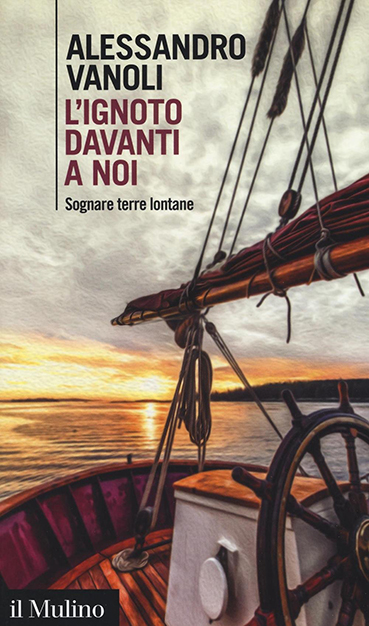 Alessandro Vanoli presents a history of geographic discovery, basing his investigation on the connection between dreams and exploration, and identifying the desire to confront the unknown as the true engine of discovery. Right from the introduction the author addresses the reader in first person to clarify his objective: “Narrating the entire history of human exploration was not my aim: this would have produced only a ponderous replica of previous writings. What I wanted to achieve was instead a sort of tour including examples and histories which, winding its way through the past, could recount something of the secular relationship between exploration and fantasy. And all this without distinguishing excessively between history and literature, reality and imagination” (p. 11).

Vanoli is inspired by the perfectly acceptable idea that any source can contribute to good historical interpretation, and so he is not afraid to use radio transmissions, films, cartoons, novels, and even autobiographical inserts. This is an interesting insight into the process that led to such substantial and enjoyable results. The decision to prefer a wide diversity of testimonies does not detract from the solidity of the reconstruction at all, and makes for a very pleasant read overall. Only in rare cases do the literary inserts, sometimes rather lengthy, weigh down the flow of the text.

The book is divided into fourteen lively, well written chapters and it could almost be defined as a collection of historical short stories, each one interesting in its own right but still well integrated into the overriding narrative. Vanoli follows a chronological sequence offering a history of discovery in which both people and things play specific roles. In his reconstruction there is even space for mythology, in particular that of Atlantis. This inclusion is certainly not forced because the engine that drives the exploration of the unknown is a complex mixture of geographic and astronomical data, literary knowledge, aspirations, dreams, and visions. Certainly the big expeditions of the early modern period would not have been possible without major cartographic improvements, but the protagonists could hardly have been men devoid of the capacity to imagine, even if in error. The exemplary case of this mingling of reality and fantasy has to be Christopher Columbus (chap. 4), reconstructed here through a substantial bibliography and “minor adaptations” (p. 193) to the ship’s log, allowing a narration of the admiral through the eyes of an anonymous sailor.

Before America, some space is dedicated to a plausible account (the scarcity of sources does not allow for more) of the presence of the Romans in the Atlantic, in particular of the first influence on the Canary Islands, with the King of Mauretania Juba II as the main protagonist (chap. 1). This is followed by an opportune inversion of perspective, a useful antidote to the Eurocentrism greatly feared in contemporary historiography but always lurking in the background: “Because the discovery of the world was not a unique privilege of the West, as we think sitting in the centre of the Mediterranean … Because on the other side of the world there was a truly immense empire, so old that its origins were recounted as if they were deeds of the gods” (p. 26). The reference is to China and chapter 2 provides an interesting account of the Silk Road, but from the eastern perspective of the Buddhist monk Xuanzhang. The following two chapters maintain an eastern focus, first in the person of the Arab traveller Ibn Battuta, and then Marco Polo. While narrating these tireless wanderers there is also an interesting reflection on the value of accounts of journeys as sources: “Language, customs, prejudices: all these limited the accounts of merchants and adventurers just as today they still limit our descriptions of distant places or simple holiday visits. Mariners and adventurers travelled enormous distances, but their journeys often served simply to confirm their preconceptions” (pp. 47-48).

In addition to Columbus, the section dedicated to the discovery of the New World also includes the Aztec King Montezuma, whose point of view is even investigated with reference to a text recited by Carmelo Bene for the cycle of RAI radio transmissions entitled Le interviste impossibili, which are still available on the Internet. Much less well known is the Jesuit figure, Fernando Olivi (chap. 6), a missionary in Brazil who was absolved by the Inquisition for accusations of loss of orthodoxy, in a religious world characterized by “new ideas and new traditions, even new cults, which mixed Christian saints, African gods, and local idols” (p. 105). This particularly interesting issue is very well reconstructed and narrated.

Chapters 7 and 10 are dedicated to two cornerstones of exploration: the Northwest Passage and the Antarctic, recounted in the journeys of Henry Hudson and James Cook, well known episodes but recreated here with particular narrative vivacity. In between the two great explorers there is an opportunity to investigate the often close ties between history and literature. This is achieved first by following the tracks of buccaneers, corsairs, and pirates, emblematic figures of the potential close links between history and literature. Then the focus shifts to the story of Alexander Selkirk, whose biographical account was perhaps the inspiration for Daniel Defoe when composing Robinson Crusoe. Finally, there is a homage to Corto Maltese, a character created by Hugo Pratt, reminding us that interest in the past can also arise from the imaginary life of children and adolescents, just like the desire to go and explore the unknown.

There are no notes, but as Vanoli forewarns in the introduction: “there is a final chapter, that lies at the end of these pages camouflaged as a bibliography, where I leave readers the necessary instruments to distinguish the different levels of the narrative” (p. 11). These are very dense pages, full of suggestions and advice to help stimulate curiosity and the desire to find out more, which in reality is present right from the start. L’ignoto davanti a noi could be interpreted as a book that encourages the reader towards other books, but also to consult documents, and watch films, which is an important virtue. The author’s attempt to trace out a story over a long period, closely connecting imaginative capacity and exploration is therefore a complete success, and the decision to trust in the possibility of combining reality and imagination works equally well.