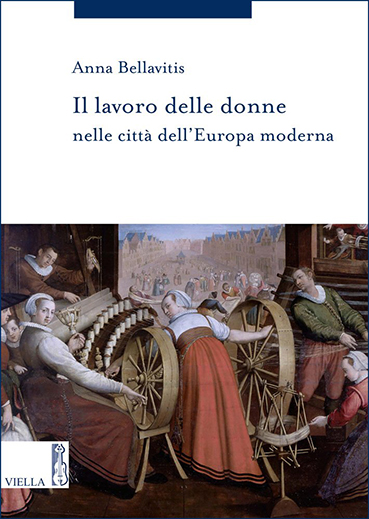 This book by Anna Bellavitis, full professor of modern history at the university of Rouen, is based on her in-depth knowledge of women’s history, which allows her to interweave primary sources, mainly Venetian, with a vast secondary literature to reconstruct the history of female labor as artisans, domestic workers, intellectuals, and care providers in Catholic and Protestant Europe. The book is organized into four chapters. The first investigates urban gender work identities, demonstrating a capillary presence of fixed and off site female labor. The second chapter is centered on women’s rights in fields like education, access to property, and to power positions in the work environment, in particular inside corporations. In this section the author traces out the evolution of their role in certain intellectual, scientific, and artistic professions (pp. 64-75). A series of examples of scientists, journalists, and actresses illustrates some trends in a slow evolution towards improved literacy and progressive acceptance of the presence of women in university lecture halls, artistic academies, and theatrical stage sets, in a process characterized by different time scales in different European regions and countries. An analysis of specific features of the legal systems of certain European areas in relation to inheritance and marriage rights provides insight into the legal capacity to act and defend the personal rights of women in the modern age, along with the strategies families adopt to get around common conventions, like for example the use of deeds of notaries to safeguard the capital of family companies against creditors (pp. 75-96).

The third chapter gives a detailed examination of the activities of women as artisans and merchants, in workshops, on the streets, in markets, in hospitals, and in convents, while the fourth and final chapter considers activities associated with the female body and the occupations traditionally considered to be the responsibility of women: midwives and the association with the medical tradition, wet nurses and the system of wet nurses, servants, prostitutes, and courtesans.

The text delineates a portrait of the working reality in modern European cities: single women, wives, widows, and daughters of diverse social extraction involved in various work activities inside and outside the home, at the limits of or beyond legality, sometimes aiming to guarantee their sustenance by occupying roles that exploit gaps in the often ambiguous regulations. The author observes how in the city the world of work is simultaneously very fluid and open, but at the same time very closed and rigid. These contradictions show that the role of women in the work market was not always subordinate to the work of the husband or familial father, and that single and married women and widows had independent activities that they managed in various ways according to the historical, economic, and legal contexts in which they operated, often more autonomously than might be thought.

The conditions under which this work was practiced, often at home and outside of the work associations that rarely admitted women, represents an obstacle to historical research, as Bellavitis explains (pp. 25-26). The quantitative sources, censuses, and fiscal sources obscured women more than men of the same social classes. This is attributable to the fact that in this documentation they were almost always identified on the basis of their role in the family (wives, daughters, widows) rather than in relation to their work activities and this was particularly true for married women. Added to this is the fact that many people over the course of their lives, both men and women, had various poorly specialized occupations. A professional identity was the privilege of a narrow section of society and most lived by multiple occupations and occasional work, especially manual and agricultural jobs. These features of work in the Ancien Régime oblige historians to interweave the sources, resorting to complementary documentation to reconstruct a history: court records, civil law notarial deeds, and so-called private sources like diaries and personal correspondence. To further explore this theme it is also important to reflect on the gender identities of specific occupations, because some of these were strongly characterized only in particular epochs, like for example sewing and tailoring, which became a female prerogative only starting from the modern era. These preconditions, says the author, make it obligatory to “avoid generalizing on the basis of ‘models’ which are not real, given that they are only valid for specific regions and particular periods and it is necessary to conduct multiple studies into individual contexts with collaboration and dialogue between different historiographic traditions” (p. 213).

This book has the merit of providing an assessment of an important period in historiography. The language and numerous concrete examples from Germany, France, Spain, Scandinavia, and the old Italian states makes it both easy to read and suitable for general readers interested in a historical reflection on continuity and change over an extremely long reality, which is partly dependent on the reproductive role assigned to women by nature. Thanks to its fluid style and extensive bibliography the author highlights how many of the themes are still current, at least in some areas of the world: from the exploitation of child labor to sexual abuse by employers. Others include the economic subordination of female labor, unequal pay between the genders, the transmission of knowledge, the training of the younger generations, as well as the burden of differences in status and class in addition to that of gender, all of these being equally present in contemporary societies as they were in the past.