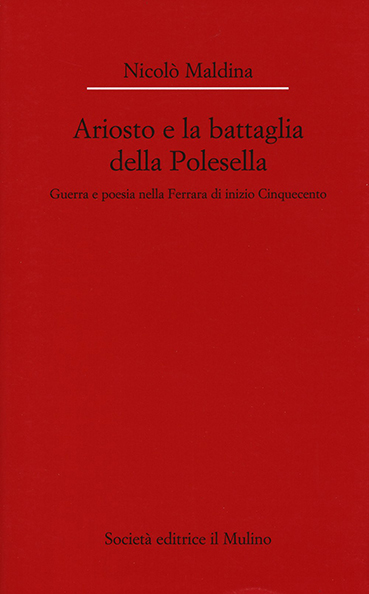 Within the broader context of the wars of Cambrai, the punitive expedition that Venice mounted against the Duchy of Ferrara from November 21, 1509, concluded with the unexpected rout of the Venetian naval fleet at Polesella, along the River Po, on December 22, 1509. The maritime Republic of Venice was defeated on water by the cannons of Alfonso D’Este. For its symbolic relevance, this military event elicited a “media hype” and became a significant episode in Ludovico Ariosto’s masterpiece Orlando Furioso.

In his brilliant study, Nicolò Maldina’s twofold aim is to demonstrate how the collective memory of this extraordinary event was generated through the combination of two different narratives—described as the “vulgata cortigiana” and the “vulgata di piazza”—and to illustrate the importance of contemporary history in Ariosto’s fictional account. Using a wide array of printed, oral, and manuscript sources (including popular ballads, vernacular chivalric poems, short political invectives, gossip and rumors, letters and private correspondence, Latin tracts and chronicles), the author reconstructs the fundamental role played by ephemeral texts and marginal figures—such as street singers or itinerant booksellers—in creating the polyphonic and evanescent form of public sphere characteristic of the early modern period.

The first part of the book focuses on the prose literary accounts of the battle written by members of the court (including Celio Calcagnini’s Commentarius in Venetae classis expugnationem and Bonaventura Pistofilo’s Presa dell’armata dei Venetiani), before moving on to the analysis of the more ‘popular’ verse narratives of Polesella (mostly written, sold, and performed by street singers). Thanks to a skillful philological investigation, the author is successful in demonstrating many intertextual links between this ephemeral production and the material evidence that connects many vernacular publishers, editors, and performers like Nicolò d’Aristotele, “lo Zoppino”, or Bighignol.

After having shown the composition of these different information networks in Ferrara, the second part of the volume illustrates the process of appropriation, elaboration, and adaptation of these two narratives in order to create Ariosto’s original literary account of the battle of the Polesella.

Surprisingly, Maldina does not reflect on an important material consideration: that most of the ephemera discussed here are held in a single miscellany of popular prints assembled in the sixteenth century by an anonymous collector. This collection, now held at the Biblioteca Trivulziana in Milan, acted as a time capsule in saving a significant number of otherwise unknown editions of cheap prints about Polesella.

Yet the mobility of information extended far beyond the circulation of printed objects or manuscript materials; it also circulated among a much wider audience (including the illiterate) via oral forms of communication. And precisely because the voice was the main instrument of dissemination used by the ballad singers and street performers, one wonders whether the investigation could have been pushed even further in order to consider more thoroughly the role of orality and the interaction between the spoken and the written word in Ariosto’s poem. However, this might have been beyond the scope of this investigation.

The present volume is remarkable for at least two crucial analytical elements: the interdisciplinary perspective that combines more recent trends in communication history with the literary studies approach and the focus on the interaction between the culture of the piazza and the literary networks of the court. Because of these important methodological implications raised, the book would have probably benefited from a more articulated conclusion.

Nevertheless, despite these small caveats, this rich and vivid volume certainly deserves a place in future discussions among literary scholars regarding the historical sources of Ariosto. It also invites historians of communication and information to reflect more accurately on the role played by major literary works, such as the Orlando Furioso, in the formation of an early modern public sphere. These are not the only achievements of Maldina’s valuable study. On a more general historiographical level, based on the empirical evidence collected, this study also challenges Peter Burke’s paradigm of an increased polarization of high and low in early modern European culture. Ariosto’s Orlando Furioso represents one of the masterpieces of Renaissance literature, but also one of the most eloquent examples of the interaction of learned and popular culture.