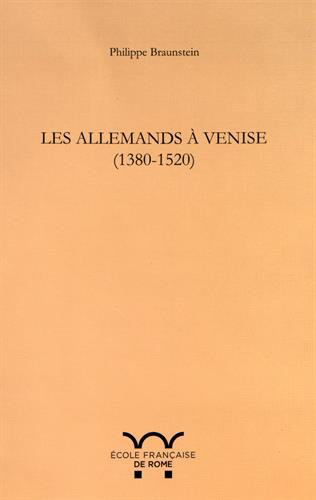 Philippe Braunstein’s weighty volume fits into a rich historiographical tradition of works on Venice’s various foreign communities. Well-known as one of the great melting pots of medieval and Renaissance Europe, Venice was famously overflowing with people born elsewhere, whether they passed through or came and settled in the lagoon city.

Important studies over the last few decades have illuminated some of the foreign groups who called Venice home in this period, and who were greeted with various degrees of tolerance or intolerance; from Jews, Greeks and Slavs to Armenians and Dutch, Florentines and lucchesi. In most cases, these works have highlighted and validated the contributions of migrant groups—establishing confraternities, building churches, patronising artworks, bringing new skills and innovations, setting up shops and conducting businesses—to the culture and economy of the Serenissima.

Braunstein’s volume will no doubt prove to be a definitive work on one of the most prominent and significant of these groups: the oltramontani who came from over the Alps, from the realm of the Holy Roman Empire. Moving beyond important earlier works by Henry Simonsfeld and Karl-Ernst Lupprian which focused on the renowned German trading house or Fondaco dei tedeschi, Braunstein’s scope expands to encompass the much broader and more diverse community of Germans beyond the walls of this building. His book, of over 800 pages plus a weighty appendix, is the fruit of over sixty years of scholarship which has seen him publish a number of important essays on Venice’s German community and other aspects of Venetian history. It is a gold mine of fascinating material, making use of an extraordinary range of sources mostly from the Venetian state archives to draw a collective portrait of a diffuse and variegated minority, the spaces it occupied in the city and the goods that it made and sold. As Braunstein stresses, this community included not just the most prominent and wealthy merchants who have loomed large in the historiography just as they monopolised the space of the Fondaco, but also the bakers, printers, innkeepers and many other more humble characters who, for shorter or longer periods, made their home in Venice.

Nonetheless, more than half of the book is focused on the Fondaco and the merchant communities that presided there. Building on the work of Simonsfeld and Lupprian, Braunstein opens up a range of new perspectives on this apparently familiar terrain. This includes exhaustive analysis and documentation of everything from the physical nature of the Fondaco, including its tavern and picture gallery, before and after the fire that destroyed the old building in 1505, to the jockeying for position of different German trading communities for the occupation of bedrooms, space to store goods and the most prominent seats in the dining hall. The staff of the Fondaco, from cooks and servants to porters, packers and brokers, many of them German or German-speaking, are shown to have been important intermediaries and facilitators of both cultural and economic interactions. An interesting chapter also considers in-depth the exchange of commercial knowledge and practices which was so crucial to the formation of many German merchants in Venice, as well as a fascinating section on German-Venetian glossaries and manuals for merchants which offer a precious glimpse of the day-to-day experience of negotiating cultural and linguistic differences in order to do deals.

Even if trade was an original raison d’être for the presence of Germans in Venice, the rest of Braunstein’s book is dedicated to exploring the more diffuse community of non-merchants which wove itself less visibly into the fabric of Venetian life. Beyond the Fondaco, a fascinating chapter first examines the broader Rialto zone, and the presence in particular of inns and taverns run by Germans and/or catering to those who visited or settled in Venice. A large section later in the book then expands its view even further to the members of the wider German community who established themselves throughout the parishes of the city. Drawing extensively on notarial records in particular, Braunstein surveys the lives of these small-time artisans and shopkeepers, showing how Germans predominated in the baking trade but also were numerous as shoemakers, weavers, tailors, goldsmiths among other professions. He also examines the important role of religious confraternities (scuole grandi and piccole) in providing support and solidarity to German migrants in Venice.

One of the most valuable aspects of Braunstein’s work is the way in which he moves not only beyond the Fondaco dei tedeschi but beyond the city itself. An early chapter (“Traverser les Alps”) illuminates the infrastructure of transport and accommodation that facilitated the ceaseless mobility of people and merchandise, from the inns of the terraferma to the customs stations of the border regions. Later in the book, Braunstein returns to these matters, examining briefly the quotidian practices of packing, transport and taxation which permitted the movement of merchandise including spices, cotton, leather, fur and metal in both directions between Venice and the north.

Braunstein’s focus is the fifteenth century, before the arrival of the Reformation and the rapidly shifting geography of trade after the discovery of the Americas changed the dynamics of power and the nature of relations between Venice and its northern neighbours. His very considerable work here confirms the central role of the German community not just in the high-level luxury trade that made Venice wealthy but in the provision of goods and services that kept the city running day-to-day, as well as in the broader environment of interaction and exchange which made Venice one of the crucibles of Renaissance culture. While it may not break a great deal of new ground in terms of our broader understanding of mobility and migration in the European past, this book does offer a much fuller and more nuanced portrait of one particular foreign community and its place in the history of Venice.