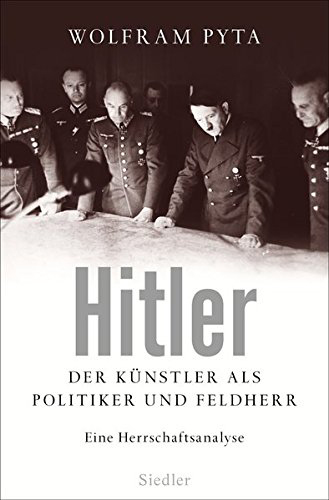 In the gamut of works on National Socialism and its founder, the study by the Stuttgart historian Wolfram Pyta undoubtedly occupies an unusual place. While there are numerous and frequently discussed analyses of Weberian descent that consider Hitler as a “charismatic leader”, the one proposed in the book under examination stands out from the others. Starting from Benjamin’s well-established thesis of the “aestheticization of politics” (although the first to talk about this, we are reminded, was Thomas Mann), the author goes far beyond this familiar formula. His thesis is, if we can express it in more precise terms, that instead we are dealing with a “politicization of aesthetics”, since Hitler developed first as an “artist” and only later, starting from 1919, did he allow himself to be possessed by the demon of politics, evolving into the role of “lord of battles”, finally overwhelmed but without ever losing the aura of “genius” on which he had founded his success.

Pyta dedicates great attention to the artistic and cultural development of Hitler, which is reconstructed in detail. His (irregular) periods of study in Linz and then from 1906 in Vienna led him to be an “Augenmensch”, connecting painting (prevalently symbolic or architectonic) with scenographic music, following in the footsteps of Wagner. The great German musician was an important interface, but not, as has often been said, for the Nibelung mythologies, but rather for having transmitted to Hitler the idea that a representative artwork must be a perfect synthesis of music, poetry, and painting. The theater thus became a venue for emotional involvement and participation, starting in his Viennese theatrical experience, where he also came into contact with Mahler as interpreter of Wagner, and even more so later in Munich and Berlin.

Another component of this landscape was the young Hitler’s great passion for architecture, a field he explored with the commitment of an enthusiastic ama- teur. As with a theatrical stage set, this too involved the management of space. “Insofern fällt der Theaterarchitektur unter dem Aspekt der Ästhetisierung des Politischen eine Schlüssselrolle zu: Wer im performativen Vollzug Gemeinschaft erzeugen will, hat den Raum so anzuordnen, dass er die Anwesenden atmosphärisch gefangen nimmt” (p. 82). The young painter of watercolours moved from Vienna to Munich in 1913 where he continued his Wagnerian pursuits and his interest in architecture.

Pyta refutes the thesis that Hitler absorbed his anti-Semitism from Wagner. Apart from the rather unusual nature of Wagner’s anti-Semitism, which was more cultural than racial, Hitler is not known to have had any anti-Semitic inclinations before 1919. In Vienna, later in Munich, and then during the war, he had good relations with Jews (pp. 99-129). In the Habsburg capital, where anti-Semitism was widespread, his main political enemies were Catholics (“Weltanschauung des Untermenschen”) and social democrats, who had not yet been branded as products of Judaism (and in fact there was no lack of obvious anti-Semitic currents among them).

Equally false is the idea that Hitler was radicalized by the war, in which he took part as a message runner and so, apart from some degree of risk in the final stage, he did not have traumatic experiences. His political radicalization instead occurred starting from May 1919 in the context of the Bavarian Soviet Republic (p. 138), and later in June when he became a propagandist in the Public Opinion Office of the Reichswehr. It was here that he started his activity as a speaker, here that he developed his anti-Bolshevism, and here that he was converted to anti-Semitism, partly as a spin-off from polemical anti-capitalist discourse.

There was also a cultural jump during this stage of Hitler’s development. His relationship with Adolf Vogl introduced him to the philosophy of Schopenhauer and Nietzsche, while the poet Dietrich Eckart introduced him to völkisch ideas, as well as the cultural and managerial circles of Berlin. He learned to speak, taking acting lessons in 1932 from the opera singer Paul Sieber-Walter (who worked under the stage name of Paul Devrient), also learning to act through his body language.

It was during this time that the future dictator realized the importance of discourse as a performative action: “Die Reden Hitlers waren performative Ereignisse deren Wirkung durch ihren Aufführungscharakter bestimmt wurde” (p. 179). Only after 1933 did he have access to the radio, which would become a prime instrument in the development of his communication strategy, although he always preferred to perform in front of “an audience”, so much so that when he dictated speeches to his secretaries he was unable to restrain himself from acting them out as if he were on stage.

Pyta next confronts the central theme of his study, which he had anticipated in the introduction: the binding connection between the concept of charisma and that of “genius” (pp. 241-260). This is the most interesting aspect of the book even if from other perspectives it is the most questionable. The charismatic domination of Hitler was supposedly based on dramatic entrances onto the scene before his audience, to receive plebiscite acclamation, but this was also said to be achieved thanks to his capacity to live up to the expectations of his audience and of his “following”, but in a manner that subtracted himself from their judgement, instead striving for their estrangement and his own involvement.

This is achieved by introducing the theory of “genius” as a key archetype in German culture, and not only in the period before and after World War I. Lombroso is cited as an example, translated into German this led to acceptance of a link between madness and genius, to which Hitler himself referred explicitly (p. 246). The examination of this cultural aspect is without doubt of great interest, with the contribution of Goethe noted in underlining the relationship between the demonic and genius, and the contemporary fascination for Napoleon and for Frederick the Great (a figure that Hitler would reference explicitly). This was an important transition because, as we are reminded, “genius is thought of being capable of anything” (p. 260).

At this point, with something of a logical jump, Pyta moves on to the second part of his reconstruction, the ability of Hitler to become “Feldherr” despite being without military training and dealing with an extremely professional military High Command. It was always the perception of the capacity of “genius” above any professional logic that explains the fascination Hitler exercised over the military throughout almost the entire war, a phenomenon linked to his capacity of interpreting the Weltanschauung, which supposedly guided events, and the superiority of visionary thought compared to rationality. His success is easy to understand during the first victorious phase of the war, but it is more difficult to explain its persistence from the battle of Stalingrad onwards, when it became clear that, at very least, Hitler’s visionary capacity had disappeared. Pyta sustains that the discourse of genius had been so strongly ingrained both in the general population and in the upper spheres of the military that it became immune to the twists of fate. When “miraculous” things happened, like the survival of Hitler in the assassination attempt of July 20, 1944, these reaffirmed antique beliefs in individuals endowed with a special destiny.

However, this only worked up to a certain point. Even Pyta admits that after the assassination attempt certain coordinates changed, so much that in his speech of August 5, 1944, to the hierarchy of the NSDAP rather than to the generals (one of the rare speeches from the final phase), instead of the strategy of imposing his superior genius with his voice and body, Hitler concentrated on maintaining “loyalty” between comrades even in the face of decline and adversity (pp. 590-597).

Pyta’s book is certainly a significant work, founded on an immense bibliography and an accurate examination of sources, providing very interesting elements for the study of political dominion, and reinforced with a multidisciplinary approach that provides very unusual stimulus for reflection. In the present author’s modest opinion it is questionable how appropriate the Weberian concept of charismatic leadership is for understanding this type of political dominion, which does not include elements of Wagnerian “theatricality”, but instead follows the ancient model, still awaiting rediscovery, of the demagogue.