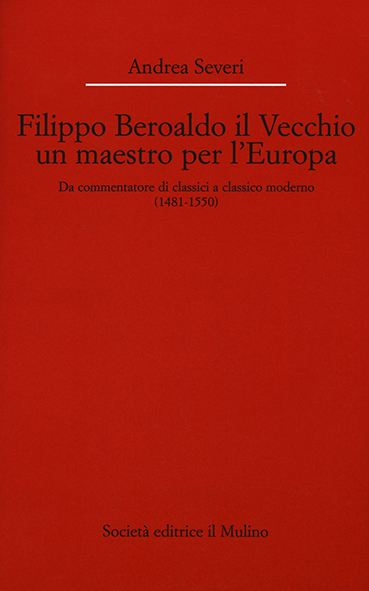 Andrea Severi’s volume (preface by Loredana Chines and Claudio Giunta) dedicated to Filippo Beroaldo il Vecchio (1453-1505) is divided into three parts: the first two provide a wide-ranging review of printed (I) and hand written references (II) to his works. The third part is a critical assessment of Beroaldo, who in various ways represents a transition figure between different cultural contexts and periods. This Bologna humanist provides an interesting example of mediation between Medieval and humanist culture, between study of the classics and Christianity, between Italian humanism and transalpine European humanism, in particular the French and German spheres.

The first two parts respectively survey printed and hand written manuscripts whose widespread dispersion established and reflected Beroaldo’s European fame. However, “survey” is a somewhat reductive term since Severi’s review presents an analysis of Beroaldo’s reporters that embraces a vast landscape of cultural history. There is an underlying “history of tradition” that emerges as one of the essential focuses of every philological work, providing an ideal point of access to penetrate the reality of a movement like humanism, to investigate the cultural and historical relationships of a text as it dispersed, and to un- derstand how a work was read in contexts that were similar but at the same time different. The references studied by Severi are sources that discuss how Beroaldo was transmitted and interpreted, who read his works, what elements of his writings entered the European debate, how these were interpreted and why, and to what extent the transalpine fame of Beroaldo differs from the Italian reception of his works. It is clear that the different interpretations that emerged from various parts of Europe testify to diverse cultural sensibilities and different ways of understanding the themes central to Beroaldo’s interests, these being the relationship with the classics, pedagogy, and religion.

As regards the printed texts (I), Severi traces back the fortunes of Beroaldo in France starting from the publication of the Orationes, printed by Treschel (1492) care of Badio Ascensio (Josse Bade), in Germany starting from the publication in Leipzig of Carmen de die dominice passionis (printed by Jacob Thanner, 1503), and the very successful Latin translations of three tales from the Decameron (IV, 1; V, 1; X, 8) presented for their moral and pedagogic value, reprinted on multiple occasions between Wittemberg and Leipzig for a total of eleven editions between 1496 and 1505. The transalpine spread and reappraisal of the works of this humanist suggests that the death of Beroaldo represented a catalyst for a final phase of growth in Italian textual humanism, and that in the following years—the first thirty or forty years of the sixteenth century—a conviction took hold among the French and Germans of a genuine translatio studiorum (p. 86).

The analysis of the printed texts focuses particular attention on the paratext (titles, preface letters, dedications, and eulogies) as elements that more explicitly reveal the intentions of the printers and publishers, their assessments and perceptions of the text. The book as object is thus dealt with in its entirety: not only the work being transmitted is important but also the process of production and consumption of the book, the motivations underlying its printing, the protagonists who conceived and set it out in concrete form, commentators, those who promoted its printing, and the readers, for example in schools. This attention to the paratext is justified because Beroaldo proved himself to be particularly knowledgeable about the use of printing as a means of self-promotion, with an approach that in this respect makes him a precursor of Erasmus (p. 53). Of course, the content of the references is also analysed: when someone preparing a print or manuscript decides to include or exclude a work from an anthological collection, to put Beroaldo’s texts alongside those of other authors, or select certain parts of a text, they never make a neutral choice. All these decisions instead document cultural relations, as well as stemmatic relations useful for philological analyses. We thus have a convincing application of an analytic and philological method that is also a historiographical method. Severi asks how Beroaldo was read and what his Italian and European readers looked for in his works.

The review of the handwritten manuscripts (II) is also used as an opportunity to interpret Beroaldo in his context and concrete presence, ranging from Latin odes to translations of Boccaccio, Severi dedicates plenty of space to Beroaldo as reader of the classics (annotations, reportationes, comments, orations) and his epistolary exchanges (chap. II, 4). Through this an outline is defined for the hand written tradition, reflecting the variety of his interests and the relationships he sustained with some major figures of Italian (from Ermolao Barbaro to Poliziano and Pico) and European humanism, including many of his students and patrons (Uldrich Rosenberg, Ladislao and Johann von Wartenberg, Hieronymus Emser, Peter Varadi). As a result, in addition to a portrait of Beroaldo as humanist, Severi’s work also clearly reveals a network of relations between humanists (teachers and pupils) and the relations between the Italian and transalpine worlds, which sometimes followed channels that still partly remain unexplored.

It is impossible to trace back all the threads of the textual tradition, repeat all the names of the humanists, printers, and readers that created the success of Beroaldo in Europe when they proposed reprints, imitations, and translations (like those of his orations by Johann Wacker and Jacob Wimpheling). The examination of the references reveals a portrait of Beroaldo as he was perceived and appreciated by his contemporaries and in the years immediately after his death, outside of Italy and in particular in the French and German areas. On the other side of the Alps, Beroaldo was read and appreciated “not only as grammaticus, but also as auctor” (p. 55), and above all as a Christian poet, while they tended to ignore his more “bizarre” aspects, influenced by Apuleius and close to the interests of Bologna humanism, for example Codro. Beroaldo’s success as a poet is in some respects surprising, but also a critical and interpretive lead for our interpretation of his works and in general for the analysis of a literary source, because it opens our eyes to certain aspects that could easily escape attention from a purely “Italian” perspective. A significant case to point is the Declamatio lepidissima (1499), commonly considered to be an example of lay humour, but which in the sphere of expectations of German readers assumed a rather different meaning from the Italian interpretation. The German reading was more strongly biased towards the moral and pedagogic aspects, as a satire against the vices, demonstrated in the interpretations of Jacob Wimpheling (a Catholic and faithful to the Church of Rome) and other German preachers.

A number of thematic chapters of the book are dedicated to closer study of individual works, discussing their dispersion and reception, and providing in- sightful case studies for the success of Beroaldo and his cultural influence. In this way Severi considers: the auto-anthology of orations and verse (chap. 3); the Orationes, published as already noted in 1492 in Lyon by Treschel, marking the start of Beroaldo’s European success (chap. 4); the comments to Beroaldo’s Carmina by Badio Ascensio and the annotations attributed to Antonio de Nebrija (chap. 7); the Carmen de die dominicae passionis (chap. 5), which with its interweaving of Christian (Catholic) content and classic humours attracted particular interest from publishers and teachers in Paris, Wittenberg, and Leipzig. Examples include Jacob Thanner, Helius Eobanus Hessus, Johann Gronenberg, and among others Henningus Pyrgallius Hyldensemensis (Henning Feuerhahn), rector of the University of Leipzig, who was in contact with Hieronymus Emser, in turn a correspondent of Beroaldo, and adversary on the Catholic side against Luther.

This approach reveals links between Italian humanism and controversies in the German sphere, and Severi’s review could offer some interesting starting points for further study. It might be queried, for example, if and in what way the eclectic classical taste of some of the elegies and odes of Pyrgallius, like the Obiurgatio pathetica (s.l., 1524) and the In lugubres trium amicorum occubitus (Leipzig, 1528), should be understood as a desire to conciliate Christianity with classical culture, this being the aspiration of Beroaldo’s humanism (chap. 5). We are clearly dealing with interpretations that stand out in a highly animated cultural landscape, right in the middle of the Reformation period, that help to illuminate some areas of contact between controversies in the German world and Italian humanist ideas.

Severi also dedicates ample space to studying the scholastic persistence of Beroaldo, in particular as a representative of Christian humanism. Even when he had already been forgotten in Italy, his works continued to be read and reread in Europe, with a consistent success that Severi links to the “pedagogic reform of certain schools (Deventer, Erfurt, Leipzig, Paris) during the years preceding the Protestant Reformation” (p. 295). Beroaldo was included in the canon of morally permissible authors and so suitable for the teaching of young students: a good fortune that derived both from his Platonic perspective commentaries (for example of Apuleio), and from the moral interpretation of his verse, memorized as aphorisms. In this sense the highly selective reception of Beroaldo by transalpine readers can be understood in the light of the efforts of early 1500s pedagogy to reconcile study of the classics with Christianity (p. 320), on the basis of the moral interpretations that teachers presented to their students.

The volume concludes with the publication of two successful odes by Beroaldo: the Carmen de die dominicae passionis and the Peanes Beatae Virginis ex Francisci Petrarchae poemate vernaculo in latinum conversi, which was the translation into Latin of Petrarch’s song, Vergine bella (Rvf 366: the poetic and religious conclusion of the Canzoniere). This is more than a simple documentary appendix, because the two texts published and commented integrate usefully into the results of the study. The array of sources included in the comments makes it possible to verify the role of collector of experience and of renewer that was attributed to Beroaldo, and to better understand how his works could also be concretely received and utilized as a repertory of moral and religious principles.

The reading of Severi’s book is therefore recommended for its thorough philological reconstruction, and for the range of information and capacity to identify interconnections, delineating a framework of European relations which, though centred on the individual figure of Filippo Beroaldo, extend out to reveal a dense network of interactions that embodied complex cultural experiences.