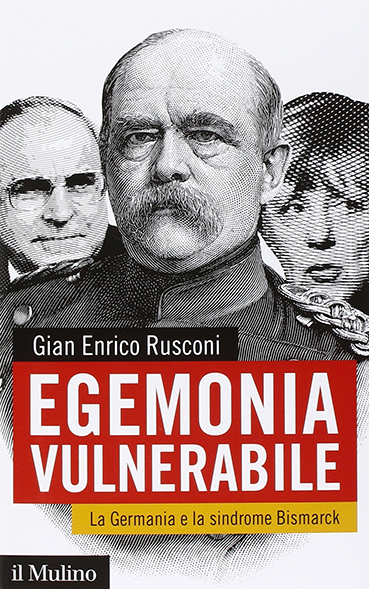 The great interest expressed in recent years in specialized literature regarding the figure of Otto von Bismarck can only be partly explained by the recent bicentenary of the birth of the Iron Chancellor. The main reason for the Bismarckian revival instead appears to lie in current day affairs. Many scholars, experts in re teutonica, sustain that to understand present day Germany in its role as guiding nation for Europe it is necessary to trace back to the end of the 1800s and, more precisely, to the two decades following German unification (1871-1890). This assumption is the starting point for Gian Enrico Rusconi in his latest volume published by Il Mulino. The study does not set out to introduce new documents or extend the vast existing literature on this topic, but more simply to propose an interpretative framework for understanding certain common issues faced by both Chancellors Bismarck and Merkel, even if very distant in time and in differing historical contexts. The central thesis of the book is that today as in the time of Bismarck, Germany’s relationship with Europe can be defined in terms of a “central power” (Macht in der Mitte) that exercises a “vulnerable hegemony”, with the adjective “vulnerable” intended to indicate a condition of intrinsic fragility. In the title the author goes so far as to propose the concept of a syndrome, a medical term for a pathological condition. This thesis could imply a certain divergence from some current interpretations on the role of Germany in Europe. The author appears to challenge sustainers of the so-called “German model”, those who reject a priori the application of historically positively or negatively connoted terms like “power” and “hegemony” when discussing foreign and European policy in post 1945 Germany. The author also challenges those who tend instead to underestimate the internal and international limitations and the dilemmas faced by the German political class in its role as pilot nation for the European Union. In reality, Rusconi is operating at a different level of historical-conceptual abstraction from that proposed by other scholars, who have also emphasised the concept of “hegemony” or of “semi-hegemony” to explain similarities and differences between the old and new international roles of Germany [1]. Through a careful operation of conceptual clarification, Rusconi raises the terms “central power” and “hegemony” from empirical and/or observational terms to genuine analytical instruments for identifying analogies and differences. In this way the author avoids falling into the trap of anachronism. Both the dominant or “hegemonic” condition of present day Germany and its “vulnerability” do not derive from the policies enacted by the governments nor from a presumed logic of manipulation or Germanization of Europe that the German political class itself declares to reject outright, but rather from a structural condition of post cold-war Europe that emerged more clearly after the outbreak of the economic and financial crisis and the Ukrainian crisis, establishing Germany once again as the center of the continent. The substantial difference between Bismarck’s era and that of Merkel is explained in the following terms. In the Bismarckian era the vulnerability was innate to the precarious equilibrium that Bismarck himself had created, by establishing the “central power”, which only Bismarck’s own direction, with some difficulty, could keep under control. In the era of Angela Merkel, the vulnerability of Germany derives instead from its nature as a “civil power” that appears poorly equipped to manage a crisis like that of the Ukraine and consequently also lacking the necessary legitimization to assert its leadership. However, in his assessment of the German management of the national debt crisis, the author fails to fully exploit the explanatory potential of his interpretative method. As highlighted by other scholars, Germany’s management of the Eurozone crisis followed a very similar path to the way the USA and France behaved during the period of the 1929 crisis, but with the important difference that its negotiating powers were strongly limited by the existence of the economic and monetary union and the absence of a credible strategy for leaving [2].

In addition to defining historic coordinates for investigating the present role of Germany in Europe, this volume contains a series of interesting starting points for reflecting on themes that go beyond the issue of conceptualizing the so-called German “exceptionalism”. I limit myself to noting just two. The first regards the current applicability of Pierangelo Schiera’s thesis, already formulated in the early 1970s, in which Germany represents an ideal test case, perhaps the ideal laboratory, to study the development of the national state from both the thematic and methodological points of view. From the thematic perspective because, as Schiera explained, it was in Prussia that the modern state expressed itself most obviously and because, as Rusconi underlines today, European Germany has still not resolved the historic issue of relations with neighbouring countries, being too large not to influence them, but too small to guide them. From a methodological perspective because, while in the 1970s it was the German culture of constitutional history, today it is the German historiographical and political debate that perhaps offers the most useful instrument for reflecting on the resilience of the state within the context of European integration. In this respect, another confirmation of the relevance of the German case study for analysing the most recent developments of the national state in the process of European integration can be found in the Handbuch zur deutschen Europapolitik published recently by the Institut für europäische Politik of Berlin [3]. The second starting point for debate instead involves the theme of political leadership, which perhaps in Rusconi’s volume deserved consideration in greater depth from a diachronic and comparative perspective. In other words whether the three chancellors depicted on the cover, Bismarck, Kohl, and Merkel, did effectively dominate with their own wills, ideas, and aims the periods in which they lived and acted, or to what extent instead these figures were mere executors of the spirit of their own period. For a more exhaustive understanding of the international role of the member states of the European Union, an in-depth analysis of the changes that occurred in the mechanisms for exercising leadership and creating consensus over the last sixty to seventy years would seem to be an essential prerequisite, especially in the light of the growing distance that has developed in recent years between the so-called “Europe of the elite” and the “Europe of citizens”.